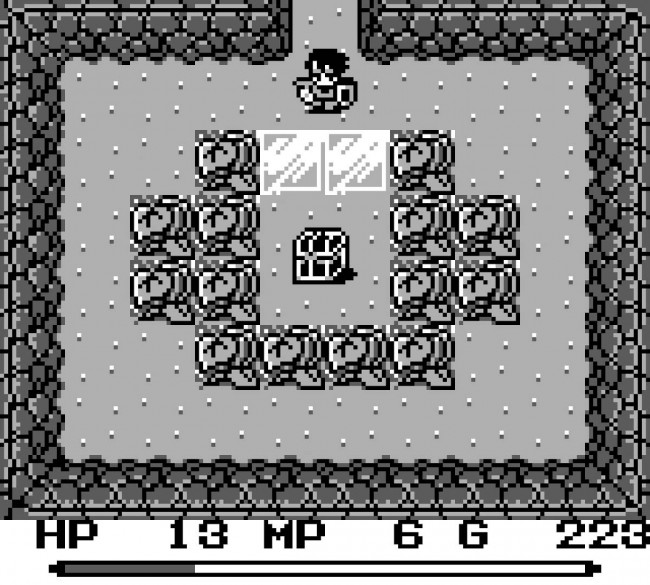 Do not adjust your old television sets, readers, but today’s planned review is not on a “Final Fantasy” game as we bring our “Fantastical February” to a close. Well, it is, but it isn’t. I know this may seem a bit confusing, but please, allow me to elaborate.

We are covering a game that most certainly carries the words “Final Fantasy” in the title, but it does not, by any means, carry any of the connections to other titles in the series, nor that tried and true “Final Fantasy” feel. Today, friends, we delve into the library of the original Nintendo Game Boy and one of my personal favorite titles for the handheld, “Final Fantasy Adventure!”

I’ve always subscribed to the notion that the best handheld games are those that do a great job of working around the limitations of the hardware, and this is especially true of those games that find a way to compose great music that is presented well on the tiny speakers of the Game Boy.

When judging graphics on a Game Boy, you obviously have to ignore the pea soup green color you’re limited to and focus on the actual elements within. The character sprites in this game range from your tiny Weeble-looking hero to his allies, a plethora of enemies, and some of the biggest and best-looking bosses on any Game Boy RPG. Magic spells aren’t that flashy, as the game definitely seems to rely more on attacks, but if there’s one downfall in this category, it is that developers didn’t do that great of a job creating variety as far as environments go.

The differences are subtle, and while you do journey from evergreen forests to a desert oasis (and other places in between), I still feel that the setup of these areas is kind of similar, just replacing a pine tree with a palm tree, for example. Even the inside of caves look a lot alike, minus a change in the rogues gallery you encounter, of course. I think the one aspect of this flaw that still grinds me is how a lot of the towns, castles, and dungeons look alike. I understand that this was the early days of the Game Boy, but I still feel like, overall, this isn’t very imaginative in its appearance when compared to other RPGs of the time, handheld or otherwise.

It is easy – too easy, perhaps – to get way ahead of yourself in this game without doing the necessary grinding and leveling up of your hero. Allies, all too often, offer little help as far as actually attacking your foes, which is a bummer, but they do offer some distinct features to help you on your quest – some refilling your health or magic bars, while others heal you of elements that run rampant in an area (like getting turned to stone or being poisoned) or even sell you items that you can’t find anywhere else in the game. The best of these, however, is no surprise, as hitching a ride on a Chocobo, free of enemy attacks, with speed to get you to faraway places in a flash, is very convenient since you have to revisit some areas in the game as you progress, searching for specific items and weapons you will need to complete the game.

Battles in “Final Fantasy Adventure” range from the super easy to the frustratingly difficult, but it’s a nice balance to keep you interested from start to finish. You can save your game at almost any point, use inns and even spare rooms in some places to refill your health and magic, and there’s a nice array of weapons you get to use. I will say, though, that your inventory can often become full very quickly, which is a pain because there are some weapons you really can’t sell or toss aside, as they become crucial in later portions of the game. At times, you will wish an enemy would stop leaving an item that your hero automatically tries to pick up because your inventory only holds about a dozen items.

As I said, I wouldn’t call “Final Fantasy Adventure” a true “Final Fantasy” game, but it has elements in it, as well as those present in other great Square titles, that make it an experience uniquely its own. While I still wish certain aspects, like the graphics, had a bit more variety to them, I still feel that this is one adventure you’re going to want to take.

Well, I sincerely hope you enjoyed this month of “Final Fantasy” games and our look back at what made them so interesting. Next month, as per popular demand, I will be dedicating March to some chosen titles on the original PlayStation console, so stay tuned for that.

And hey, cheer up, spring will be here soon, which just so happens to be another great season to game on!