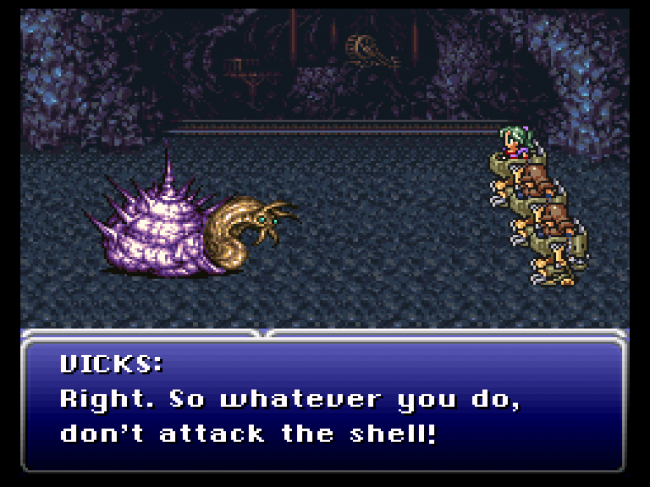 Just what fuels a video game store? Better yet, what fuels those who come into the store, make a purchase, or even just reminisce about times long gone? The answer is the folly we all had that things just wouldn’t get any better, any bigger, and any flashier than they were. While it can bring on feelings of guilt, that you didn’t appreciate what you had until it was gone, it can also build an appreciation for the amount of work put in by developers to create something that, at the time, had never been attempted before.

Today, as we continue our quest through a “Fantastical February,” we take another look at “Final Fantasy III” (or “VI,” as it was known in Japan) and how it became one of the most beloved RPGs of its era – and arguably the entry in the “Final Fantasy” series that first cemented Square as the developer of RPGs. So, without further ado, let us journey back to the days of the Super Nintendo and “Final Fantasy III!”

Those who argue the relevance and importance of retro games, preferring mainstream modern games, are always quick to point out the amazing graphics or the elements of a particular blockbuster title that put it above the rest, foolishly forgetting that these elements they believe are so grand would have never happened if not for our forefathers in gaming – “Final Fantasy III” is definitely one of them.

Sadly, in this era of gaming, truly breathtaking, well-composed, and perfectly placed soundtracks are all too often overlooked, which is a shame. “Final Fantasy III” had music for every kind of gamer, every kind of music lover in general and, yes, those who enjoyed certain aspects and scenes in the game more than others.

If a good soundtrack is like a sound foundation for a game, then brick by brick, piece by piece, Square outdid themselves with the soundtrack to “Final Fantasy III,” without question. Whether you like the many pieces of “Dancing Mad,” a little bit of opera music in your life, or even the heroic tunes of Locke, this is without question a remarkable feat in the realm of video game music, not just for that period of time, but even today!

While its predecessors were both limited by the 8-bit NES hardware as well as early previews of what developers thought the SNES could do, “Final Fantasy III” took a lot of the things we had come to expect for a “Final Fantasy” game and enhanced them in every way possible. Yes, we were still looking at some smaller sprites, but they carried a bit more detail with them, and the bosses and spells were truly awesome to behold for the time.

It is also obviously worth mentioning that “Final Fantasy III” made ample use of the tried and true staple of the SNES, Mode 7 graphics, mimicking what many thought 3D should look like while truly just shoving a whole bunch of pixels at your face at one time, but hey, we were kids, so we clapped and were jubilant nonetheless. The varying environments and scenes in between battles are all well-done and created in a way that truly takes the player on a journey, immersing them in a truly compelling story.

While many classic RPGs, this game included, have plenty of grinding and leveling up your party in order to tackle certain portions of the game, especially some tough as nails bosses, what sets “Final Fantasy III” apart from so many of its contemporaries is just a truly amazing, action-packed story with many twists and turns, the true emergence and showcasing of side quests, and not to mention (but spoiler alert) there’s an opera scene and the world ends!

“Final Fantasy III,” without question, has some of the greatest battles, enemies, and cast of characters ever seen in a “Final Fantasy” game up to that point, and even since in some ways. Before spells, summons, and other tools of the trade in “Final Fantasy” battle systems became dazzling displays of graphics, they were beautiful in their own right but, most of all, effective and easy to use. Making your way through “Final Fantasy III” is a learning experience, but the keyword here is “experience.” Great RPGs in general, this one included, are not games, they are experiences that can only truly be appreciated by those who grew up with or fell in love with the genre. With branching, enduring, and compelling stories that intertwine so effortlessly, you can’t go wrong with playing “Final Fantasy III” if these are the kinds of games you’re into.

While so many “Final Fantasy” entries in the long and illustrious franchise history have soft spots in the hearts of gamers, it would be some time before another “Final Fantasy” game would pull at the heartstrings and set the mainstream gaming world on fire. While that’s well and good, one has to wonder if the reception would have been quite as grand if not for the wheels that were already turning by the time this particular entry hit store shelves. The SNES and “Final Fantasy III” definitely had a symbiotic relationship, with each piece of video game history benefitting from the other, and this is a trend we will continue with next time here on Turn to Channel 3 as our “Fantastical February” rolls on… Why, you ask?

Because, next time, we challenge the mighty Sephiroth in “Final Fantasy VII” on the PlayStation 1!

It’s getting cold out there, so bundle up, pour yourself a warm drink, and hunker down because below zero temperatures are no excuse not to game on!