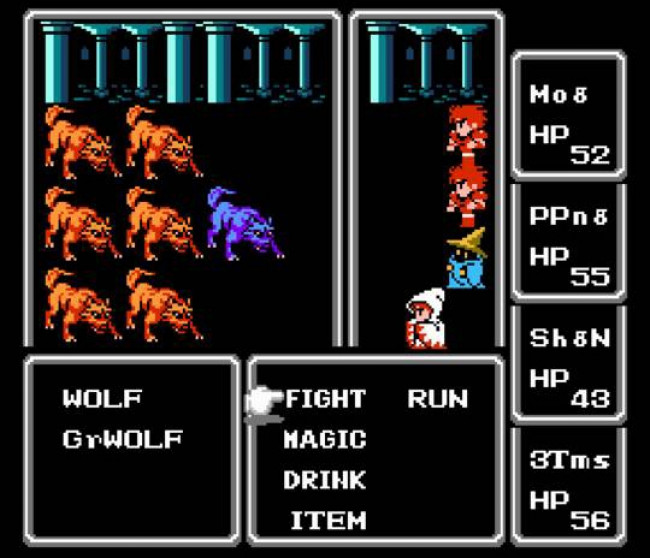 Video games experience their own forms of “Big Bangs,” and while one can undoubtedly credit the original “Super Mario Bros.” on the Nintendo Entertainment System for a resurgence in video games, there’s definitely room to pay tribute to those games that took those original elements and made the gaming experience and the industry as a whole that much better. Such is the case with today’s topic here on Turn to Channel 3, known to the masses as “Final Fantasy.” Yes, friends, we are doing a month of “Final Fantasy” titles – a “Fantastical February,” if you will – and we’re starting with the franchise’s humble beginnings.

“Final Fantasy” was created by a company known as Square (which is now Square Enix), hedging all its bets on the hope that this one game would bring them the fortune and notoriety that had eluded them up to that point. With “Dragon Warrior” on the NES laying the groundwork and tabletop RPGs serving as the grandfathers of the whole deal, “Final Fantasy” wouldn’t just change the original formula – it would bring this genre of gaming into the mainstream. But how does “Final Fantasy” stack up in 2016, nearly 30 years from its initial release? Well, that’s what we’re here to find out, Light Warriors!

It is easy – too easy, in fact – to look at “Final Fantasy” games during the prime days of the franchise and refer to some of them as the greatest masterpieces of RPG soundtracks in the genre, but what many people, including those who have followed said franchise since its inception, forget is that some of those staple tunes began here. Songs such as those you hear during battle, the victory tune, and even the title music all had their debuts here on the NES, and while the direction of the music, like the stories within, have changed from the ones found here, one thing hasn’t – the solid use of what is available to compose some truly amazing music, and yes, I can still say that about 8-bit music.

Soundtracks are important in any genre, on any console, in any game, but none perhaps as much as in RPGs, because you’re not just setting the tone for the game, but the story woven within, the characters you meet, and the situations you find them in. RPGs are all about personality, charm, and aspects that grab you that can’t be found in other genres all the time, especially when “Final Fantasy” debuted in the late ‘80s. This is a compelling soundtrack that belongs among the best on the NES console.

Keep in mind, other than “Dragon Warrior,” no other game or company attempted to craft a world that was so often left to the imagination of the player within the realm of tabletop games. While this may not seem like a daunting task in 2016 in comparison to the blockbuster budgets present in games now, it was a huge undertaking at the time, and Square created characters that, yes, while not possessing long names (it’s pretty much a running gag at this point that early “Final Fantasy” titles didn’t allow you to give your characters long names), still had quite a bit of charm and personality just the same.

In addition, “Final Fantasy” introduced the idea of a party of characters in RPGs, with each character having their own strengths and weaknesses, adding an element of strategy to the RPG. Many of the environments you come across may seem bland today, but they were still detailed enough to appear quite impressive for the time, with even the attacks and definitely the spells used looking pretty solid in 8-bit graphics.

One of the many moments in my day where I feel like an old man (I assure you, they happen far more than I’d care to admit) usually involves my rant on how games today, especially for children, take the poor kid by the hand, show them what to do, where to go, and beat them over the skull with the premise and general idea of the game. Of course, this has me waxing nostalgia with statements that might as well just be me grumbling in between phrases like “back in my day…” and “walking to school uphill in the snow” (both ways!) when what I am truly getting at is that “Final Fantasy,” while having pretty straightforward gameplay as far as the battles go, still throws in some little quests and tasks you must do, along with just slashing your way through enemies to save the kingdom.

Chances are, back then, unless you had the ultra handy (and ultra awesome) Nintendo Power strategy guide, you were left wondering just what it is you had to do which, while terrible at the time, really teaches you a better appreciation for what you grew up with. “Final Fantasy” lulls you in with what seems simplistic for the time, but it becomes increasingly difficult as you play, like any good RPG stalwart of the past.

What was once a struggling company’s only hope has ballooned into this staple, this fixture, this brand within RPGs and gaming itself, creating some of the most complete gaming experiences ever while also leaving us with moments where we were scratching our heads, wondering what developers were thinking. That being said, I find “Final Fantasy” a much-needed pilgrimage to the past for those who are loyal followers of the franchise.

I’m a big advocate for learning to appreciate what it is you have, and when you see the jaw-dropping graphics of, say, the “Final Fantasy VII” remake that is to come, it will make you thank your lucky stars (or Clouds, or even Sephiroths!) that a company no one thought could make it found a way to make what was to be their final fantasy in the gaming world just the first of many more to come.

So, where does one go after the debut of “Final Fantasy?” Why, to the first of many series favorites – “Final Fantasy III” on the SNES!

Until then, remember, February can sometimes be a cold, dark, depressing thing, so lighten things up with some games, because even with less days to work with, it is still a great month to game on!