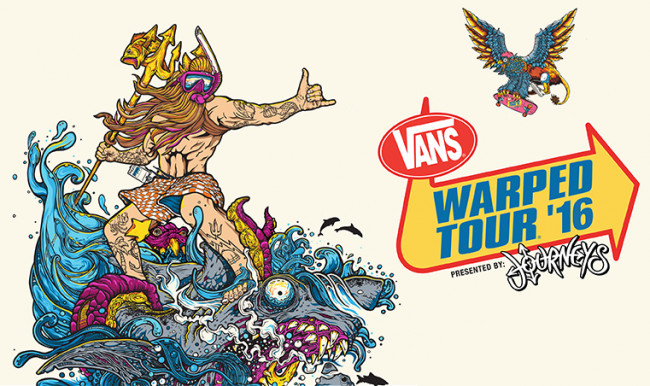 The complete lineup for the 2016 Vans Warped Tour, presented by Journeys, has finally been revealed.

With a lineup that in many ways signals a return to the tour’s roots, the 22nd edition of Warped Tour welcomes back several fan favorites, including New Found Glory, Tonight Alive, Less Than Jake, Yellowcard, We the Kings, Sleeping with Sirens, Falling in Reverse, Four Year Strong, Reel Big Fish, and Pepper, to name a few.

The new Monster Energy Party Zone will present festival-goers with two stages of heavy music from bands such as Scranton’s own Motionless In White, Atreyu, Every Time I Die, The Color Morale, Chelsea Grin, and many more.

In keeping with its longstanding tradition of bringing music fans the best of newer, up-and-coming acts, this year also includes bands like State Champs, Like Pacific, In Hearts Wake, Capsize, and From Ashes to New, plus much more.

The 41-date trek launches in Dallas, Texas on June 24 and concludes on August 13 in Portland, Oregon, stopping at The Pavilion at Montage Mountain in Scranton on Monday, July 11.

Tickets are now on sale and can be purchased at vanswarpedtour.com, ticketmaster.com and all Ticketmaster outlets, The Pavilion at Montage Mountain box office (1000 Montage Mountain Rd., Scranton), or charge by phone at 1-800-745-3000.

“Who would have thought that we would be still bringing you the Vans Warped Tour in 2016? Each year, I look forward to the summer and the chance to tour with so many old friends and hopefully some new ones,” says tour founder Kevin Lyman.

Jim Estepa, president and CEO of Journeys, adds, “As our partnership with Vans Warped Tour grows, we are thrilled to make the jump forward to naming both of the main stages this summer. The visibility, brand growth, and full integration that we’ve been able to build into the program with the Warped team has been not only practically beneficial, but also an incredibly fun relationship to build. Over the years that we’ve worked together, we’ve grown our promotional presence, grown the offerings that we can make to our employees, grown our retail partnerships to include ticket sales in multiple markets, and now grown to be the name partners of the main stages. It feels like a natural next step for us, and we are excited to see what the future brings!”

As part of its ongoing mission to help those in need and encourage positive social change, the Warped Tour’s charitable organization Unite the United will be launching a charity auction to aid Los Angeles band The Ghost Inside in their efforts to recover from a devastating bus collision that occurred while out on tour last November. The auction will kick off on May 19 at ebay.com/unitetheunited.

The Vans Warped Tour is well-known as America’s longest running touring music festival of the summer. Since 1995, the tour has been a showcase for both established and up-and-coming talent across a wide range of eclectic sub-genres.

The tour has also cemented its place in history by bringing alternative rock and skate culture from the underground to the forefront of global youth culture, while at the same time helping those in need through nonprofit and eco initiatives.

See photos from the 2015 Warped Tour in Scranton here.