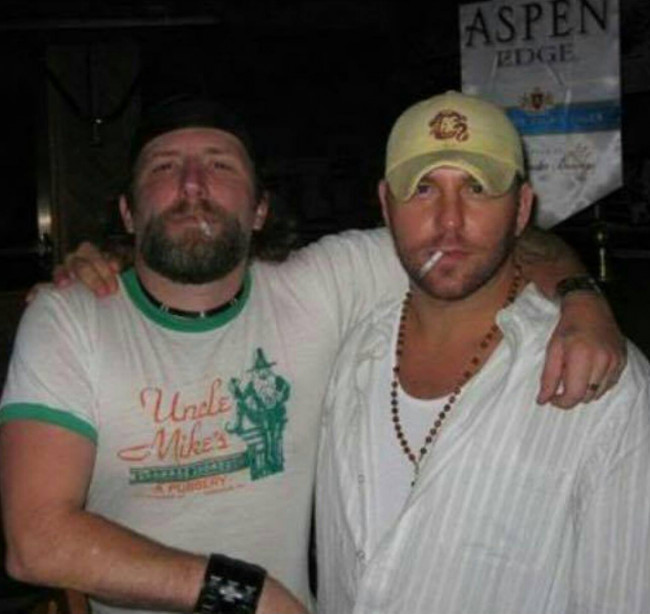 Yeah, it’s a Polack name. And, like most everyone reading this, I’m a mutt. A half-breed, if you will. As my grandfather used to force me to say when asked why I wore a green carnation on St. Patrick’s Day sporting a Yonko last name, “Well, me little old mudder was Irish.” So, I feel qualified to expound further.

Today is an odd day for me. You see, I was supposed to start writing this column several weeks ago. However, on Valentine’s Day, just a bit over a month ago, my beloved cousin Shane Mullally passed away suddenly. I haven’t quite been right since, and today is a particularly difficult day for me.

Shane and I were raised for all intents and purposes like brothers. We always considered ourselves to be just that, and no one had better say any different; there wasn’t ever anyone closer with either of us than we were with each other. St. Patrick’s Day was a big day for us two (we were commonly referred to as the Mullally boys, despite my last name not being Mullally, as discussed above).

Parade Day in Scranton (generally not on March 17, but the Saturday before) was a different kind of celebration; we would often overindulge and partake in the revelry with the rest of the local micks and one-day-only shamrock wearers – far be it from us to interfere with tradition. That said, however, St. Patrick’s Day proper was a horse of a different color.

The two of us generally spent the day together alone. We would indulge in what we called our “epic strolls” – long, slow walks over a period of eight to 10 hours, covering most of Scranton’s alleyways and railroad tracks, sometimes even a large chunk of Lackawanna County. During these “epic strolls,” we would discuss everything. Everything! But on St. Patrick’s Day, the gabbing tended more towards Irish-centric topics.

Topics included, but were not limited to, the history of the IRA, the Westies, U2’s validity or lack thereof (depending wholly upon album era and Bono’s concurrent sunglasses) and, of course, our own rich, colorful Irish heritage (for instance, it’s been rumored that we were asked to leave Ireland due to some sort of horse thieving incident).

But our most sacred tradition was to simply sit down together and watch Phil Joanou’s Irish mob masterpiece “State of Grace.”

Ed Harris, Sean Penn, Gary Oldman, John C. Reilly, Robin Wright… let me hasten this along – find a copy of this film and watch it. If you’re Irish American to any reasonable extent, you’ll “get” it.

I tried to watch it by myself today. Around 15 minutes in, I had to shut it off. I reflected upon Shane for the first time since he passed away. I poured over how much he meant to me and why until, finally, it hit me just how deeply and urgently I miss him. I don’t think I was prepared for that sinking in. The gravity of it all is simply overwhelming.

As an Irishman (or partial Irishman, as the case may be), I could very well have spent the next few minutes, hours, weeks, or even the rest of my life feeling sorry for myself and lamenting my loss. But, exercising a lesser-known Irish quality – utter joyfulness in the face of adversity – I decided to look back fondly and be wholly grateful. After all, I had spent more time with him than just about anyone else on the planet, the way I figure. That’s a seriously grand gift to have been afforded to the likes of me, here.

In the passing of weeks since Shaney has moved on to greener pastures, he has, of course, been deified. But his angelic qualities (hmm, them fucks) were never what endeared him to me. Rather, his human qualities, his flaws, those were what we had in common. That is where my love for him is rooted.

His tendency to fly off the handle and immediately be contrite; his occasional overindulgence in the grog; his proclivity towards enjoying only the most depraved of activities (in the best possible way); his sneering down his nose at anyone whose opinion varied from his own, deeming them intellectually inferior because they couldn’t see it his way; his inability to keep a confidence (and the perplexing persistence of my continued decisions to entrust him with mine), as well as his absolute loyalty to those he loved; his ability to find humor in the most dire of circumstances; him finding it impossible to not be 100 percent truthful with his criticisms; his undeniable, irresistible charm and the way he used it to get his own way; his taste in music, which fluctuated between brilliant and appalling; and last, but not least, the four-plus decades of constant, unpredictable knock-down, drag-out, vicious, violent, and instantaneously forgotten the second they were over fist fights between he and I. These will forever remain some of the things that most endeared him to me.

He was a cad. He was a scoundrel. He was a gentleman and a scholar. He was a drunk and a brawler. He was totally reliable and completely undependable. He read every scrap of text he could get his mitts on. He was the funniest, smartest, most sensitive and intuitive person I’ve ever been graced to be in the presence of. He was a joy to behold were you in his favors and a terror to be endured should you cross him. His command of the English language made him a valuable ally or a venerable foe, and it was on you to decide which one you were going to get.

He was the most glorious of glorious bastards, and I will love him with all my heart until the day that I join him again. And you can make bank that I’ll throw down with any man who agrees with the bad or disagrees with the good listed above who isn’t family!

You see, on our side of the Mullally clan, we have a saying. It goes like this: “Yeah, he’s an asshole. But he’s our asshole.”

I miss you, asshole.

I apologize for this maudlin first installment. It has little to do with what I am supposed to be doing here, and I doubt highly that it will recur. But, as for the time being, I humbly beg your Indulgence, just this once.

I leave you with one of our favorite Irish blessings: