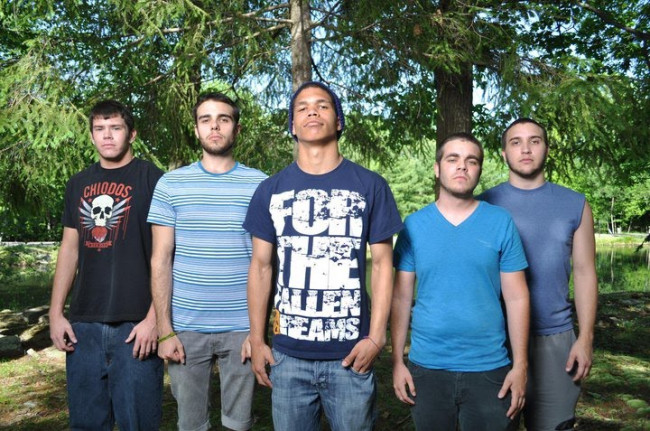 During their time as an active metalcore band, One Last Time opened for legends such as Terror and played the Vans Warped Tour. They also merged multiple genre influences to create a sound all their own and went through various lineup changes.

The Scranton group will be reuniting for one night only at the 2016 Electric City Music Conference in September. ECMC co-founder Joe Caviston recently caught up with the band to talk shop and see what they had in store for the reunion show in an exclusive interview for NEPA Scene.

NEPA SCENE: Can you give us a short history (to the best of your memory) of the formation of One Last Time?

KENNY WATKINS: My friend Jerry and I got together and wanted to start a band. Jerry rounded up people from his college and from past musical projects. Mark came to listen to a jam session and wanted to join, which was pretty cool because he was leaving a reputable local band to be in ours. We went back and forth, deciding if we should be a pop punk band or a metal band. We ended up deciding on metal and never looked back from there.

NS: Mark, can you talk a bit about leaving your previous band and the transition into One Last Time?

MARK SOLOMON: The band that Kenny is referring to was called Aesthetic. Aesthetic was around for a long time, in many incarnations with many members, and disbanded years ago. Many people may not know of the band specifically, but you may know some of its former members from current acts like Dance Hall Devils, Behind the Grey, Drew Breeze, Graces Downfall, and M-80. Aesthetic was a metalcore band, and after doing that for so long, I wanted nothing to do with playing heavy music. But, like Kenny said, I happened to sit in on a jam session with (what would become) One Last Time and realized that, while I didn’t know what direction things were going, I knew they were very talented guys.

NS: You mentioned the initial debate over being a pop punk or metal band. Would you say both genres influenced the band?

KW: We wanted to stray from pop punk because it wasn’t us. We felt more flexible to do what we wanted – metal.

MS: I’d say that both genres influenced the band. It mostly showed in the fact that we always wanted strong melodies, no matter how heavy or aggressive the band was.

NS: You guys came on the scene at the height of the “heavy music boom.” How do you think that influenced the band’s run?

KW: It influenced it for a while. Then, I remember personally not liking the direction we were taking with songs like “S.P.U.” and other tracks that were never released. The “Message to the World” EP, I felt, was us straying away from the cliché heavy side and taking a more unique melodic tone, while retaining an aggressive nature to the music.

NS: It seemed like the local metal/hardcore scene was enormous at that time. What do you attribute that to, and who were your favorite local acts to play with?

KW: I loved the culture a lot. It always felt like home at a hardcore or metal show. My favorite bands to play with were Bring the Heat, Not Til Death, Cut the Tension, and Existence.

MS: Being an older guy in and out of the heavier music scenes, I’ve noticed there’s always an ebb and flow that can be attributed to venues opening and closing. There are always a lot of bands attempting to get out there, but they don’t always having a place to play, especially the younger kids. When we were playing a lot, not only were there quite a few great venues (yes, Eleanor Rigby’s comes to mind, Joe), but there were also a lot of quality local bands and big touring bands coming through the area. All of that momentum snowballed.

NS: If I remember correctly, you guys had a chance to open for some heavy hitting nationals in your day. Do any stand out to you as the most memorable?

KW: Terror was my favorite band to open for, by far.

MS: Playing the Scranton date of Warped Tour was a lot of fun. I always enjoyed the larger festivals that had a crazy mix of genres. But, I agree that opening for Terror was probably my favorite supporting show.

SHANE BUTLER: I agree on the Terror show.

NS: Is there any particular reason behind the Terror show having such significance?

KW: It was the first time we played an out of genre show, and we got a lot of respect. We were by far the black sheep on the bill and we were still welcomed with open arms. It showed me a lot about how we had progressed as a band and that we could grab multiple crowds, not just the metal fans.

MS: On paper, we were totally out of place on that show. Everyone else on the bill was traditional hardcore, and we were big fans of the other bands on the bill. Suburban Scum and Strength for a Reason were on that show and, to be honest, I was kind of afraid of getting booed off the stage because we had singing parts. As it turned out, it went really well and we got to enjoy bands we love afterward.

KW: Warped Tour was definitely up there, though.

NS: Time for the awkward question. What caused you guys to call it quits?

KW: Honest to God, I was in a very different place in life and mentality. I grew very self-centered and, as time went on, morale was greatly diminished. I started kicking people out [of the band] until the only one left was me. There were other variables, like money and just life taking a bigger grasp on us than we expected. I ended up calling it a day all together because we lost the joy and fun we once had. It is a very unfortunate thing looking back, although it needed to happen to teach me not to act like that in a band again.

NS: If you could give a young band one piece of advice, what would it be?

KW: Teamwork, teamwork, teamwork. You are only as good as your weakest link in the band. Don’t always be looking for the most talented musicians or the people you think will make your band “cool.” Be a band that has a business mindset to carry out you goals and hold everyone accountable. The music business is one of the hardest businesses to get into. If you’re not on the same page, division can easily destroy everything from the ground up.

MS: My piece of advice would be to know when it’s time to be serious and time to have a lot of fun. No matter what, you’re going to have to make sacrifices and miss events for gigs. Practice your ass off, take too much time for not enough money, and put in your dues. That’s all part of the deal, no matter what your musical goals are, but don’t forget to actually enjoy the hell out of what you’re doing as much as you can to balance that out and make it all worth it.

SB: If you’re a starting band, don’t forget why you’re doing it: for the love of music. It tends to be run more like a business at a certain point, and sometimes it will run the band into the ground. Teamwork is everything. Don’t let egos get in the way of the writing.

DERIN SPECTOR: Agreed. Just knowing you’re all on the same page in terms of passionately pursuing this musical avenue is a plus but, unfortunately, people and their interests grow apart over time.

NS: It has been a while since the last time you performed together. What can your fans expect from the reunion show?

SB: I think the reunion show will bring people back to a simpler time in their life. Shows tend to let you forget about the “real world” for a minute, especially ones like this. When I went to the Putrefied reunion, I don’t think I’ve smiled that much in a while.

MS: We’re going to fist pump, jump over each other singing along, and get real sweaty.

The Electric City Music Conference returns for its third year on Thursday, Sept. 15 through Saturday, Sept. 17. Artists, lineups, and venue information will be announced in the coming months.