We’ve got a little gypsy brewing dankness from those good folks over at Søle Artisan Ales, a nomadic brewer shipping out of Pittston, with their Double IPA Good Good! How good is it? Watch and learn! 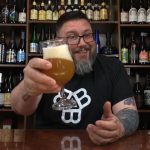