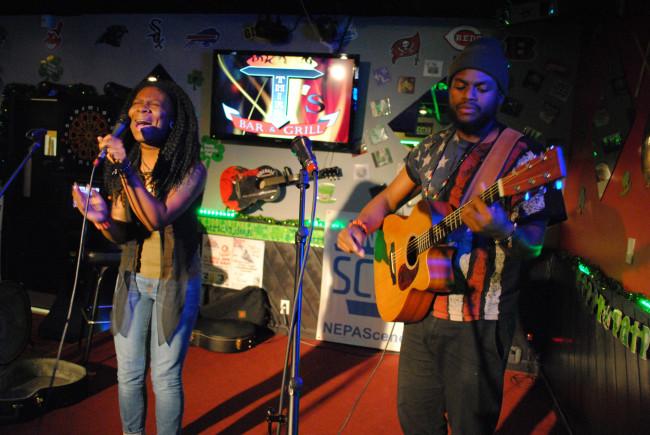 Every week of NEPA Scene’s Got Talent, our free open mic and talent competition at Thirst T’s Bar & Grill in Olyphant, we feature a quick Q&A with the latest audience vote winner, which was Nicholas DeSouza from Stroudsburg and Elonda “Vibez” Crowell from Paterson, New Jersey on March 15.

Their victory was particularly special because, for the first time in the history of the event, they tied with another performer, Patrick Schwartz, so rather than break the deadlock and choose one ourselves, we decided to declare both acts the winners.

The weekly winner receives $50 in cash, courtesy of Fireball Cinnamon Whisky, and the headlining slot for the following Tuesday, and all other performers are encouraged to compete again as often as they’d like or simply show off their talents for fun. The event is sponsored by Coors Light; LT Verrastro, Inc.; Fireball Cinnamon Whisky; Fidelity Bank; Laugh Out Lepka’s Comedy; and Thirst T’s.

After 12 weeks, the 12 winners (now 13 winners) will compete in the Finals Showcase on May 31 in front of a panel of judges for the grand prize – $250 cash courtesy of Laugh Out Lepka’s Comedy; a $100 gift card from Fidelity Bank; a summer backyard prize package with a fire pit, wooden deck chair, grill, and cooler from Coors Light and LT Verrastro; a headlining slot at the 2016 Electric City Music Conference; and a guest spot on an episode of the NEPA Scene Podcast. The second place winner will receive $100 cash.

We asked DeSouza, 23, and Crowell, 21, about winning Week 3 with a soulful last-minute performance of “Crazy” by Gnarls Barkley, “Appletree” by Erykah Badu, and a song improvised on the spot.

NEPA SCENE: How did you first hear about NEPA Scene’s Got Talent, and what made you decide to perform last week?

ND: Both of us have been performing since birth and have been working toward goal that led us to be together. I started performing music as a child in Bed-Stuy at age 12 and had been playing for the New York City open mic scene. When I was 17, I moved to Stroudsburg, where I owned a band called The Society and played for several other scenes, including the Scranton scene.

ELONDA CROWELL: I starting performing at a young age in the performing arts church I attended in Paterson, New Jersey. Ever since then, all I know is performing and music, music and performing. I live, eat, and breathe it.

NS: How long have you been performing together?

EC: It feels like a lifetime, but only three months numerically.

NS: Have you written or recorded any original music, either together or separately?

ND: We’ve both written for our own personal interests as well as for others.

NS: Freestyling isn’t easy, but you both pulled it off well. Where did you learn those skills?

NS: How did you choose the covers you performed last week? Do they have any particular meaning to you?

ND: We decided on stage. Each song we do represents a perception of our view on the world, ourselves, or the connection with another, be it a group or an individual.

NS: There’s a lot of emotion in your performances. Is the performance and presentation just as important to you as the music itself?

EC: The stage is our altar, a sacred place in which our true selves can shine bright like the star light in the night. She can build you up and break you down. Just like breathing, each step in the motion is just as essential as the last – the building blocks for our presentation.

ND: Shocking because we had no intentions of performing, just supporting a funny guy.

EC: We gave it back to the universe. And gas to get home.

EC: To see the mass of artists bring people together for a night of bliss.

ND: I like the diversity of comics, poets, and musicians. I think there should be more artist development around to help people with the general direction of where they might want to end up.

ND: Wednesday, April 13 at Sarah Street Grill (550 Quaker Alley, Stroudsburg). Inquire with us about a time.

For more information on Season 3 of NEPA Scene’s Got Talent, which is always free and open to anyone, click here.