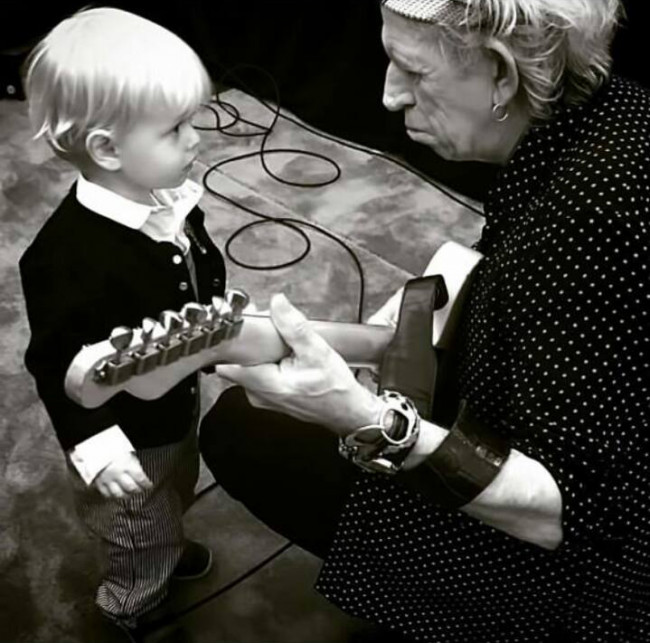 Last weekend, my good pal Tom Flannery sent me a photograph of Keith Richards and a small child (pictured above). I sent him a text to tell him how much I loved that picture. Tom and I are finishing up his latest record as we speak, so we talk back and forth often these days.

Tom and I are both bloggers, so he made the suggestion that we both write about this Keith shot as our next entry. Now, Tom is a playwright, a badass songwriter, and he can write dialog like no one I know. A real pro. But I agreed to put my words next to his on the same subject. I told him I could write 10,000 words on that photo. I’m not going to do that, but hopefully I can at least keep up here.

When you get a minute, check out his entry here.

As silly as it sounds, the first thing that came to mind when I looked at that photograph was a card I got from my wife and kids several years ago for Father’s Day. On the card was a father walking with his son who had a blanket wrapped around his neck. The inside read, “Not all heroes wear capes.”

I love that card.

I look at that picture and wonder what’s going through that kid’s head. I mean, that’s like talking to a living statue, a superhero. It’s like staring down a guy who fought in the Civil War. I later found out that the boy is Mick Jagger’s grandson, so that just adds to it. He’s probably thinking, “Grandpa has some scary ass friends.”

In 2005, my wife Kelly and I bought an old 1940s storefront with the intention of putting a bakery in it, which we did. A full-sized home was attached to the back of the building, so we lived there. Still do. What we didn’t plan on came later – eventually, I got the bright idea of moving my studio operations into the basement.

This actually worked out really well logistically, except for the fact that the entire Northeastern Pennsylvania music scene gained about 1500 pounds collectively from all the baked goods I brought down into the studio.

And, oh yeah, the noise.

My wife still points out the dents in the pots and pans that we rattled off the walls (guitar players, you know who you are). My kids always said that their life had a soundtrack – a dull, persistent growl going on below their feet while they did their homework, ate dinner, and watched TV.

I remember reading an interview with Jakob Dylan once where he talked about growing up as Bob Dylan’s son. Jakob said, “I didn’t know who any of these people were, but I knew if dad was playing with them, they must be good.” In a much more humble sense, I hope my kids realize how good the musicians I work with are.

My kids know a lot of the people who wrote and played parts of their soundtrack. My musician friends know my girls’ names and the names of their pets too. They come to parties at the house and drop by on the holidays and stop in to say hello after sessions are done.

Not everyone gets to meet the people who wrote the songs of their lives. But every person has a soundtrack. That is for damn sure.

And that is where Keith Richards enters my story today.

You can put me in a car and drive across America and I won’t think twice about how an automobile works. Play me one rock and roll song and I want to know the genealogy of every lick. To me, Keith Richards was the connector who put that all together for me. He (and John Lennon) connected me to the blues, R&B, country music, and the rest of the British Invasion bands. That was where it started for me. And it’s been that way literally since the day I was born.

I’m 50 years old. I was born in 1965. Hell of a year, 1965. Malcolm X was murdered. The march on Selma happened. My father was off fighting in Vietnam and the Dominican Republic. Vince Lombardi was the coach of the great Green Bay Packers.

I was born on the same day that “Satisfaction” was released as a single in the United States. I like to think that, somewhere in that hospital, someone had a radio on… and the most famous rock riff in history was the first musical sound I heard. I’m going to go with that.

Some of my earliest musical memories I have are of going to square dances in my hometown. I grew up in North Central Pennsylvania, but it might as well have been Northern Kentucky. They taught us how to square dance in gym class. I bet I could still do it.

Anyway, there was a band that would play in town during these dances, the McNett Brothers, Bob and Dean. They would be up there in checked shirts, bolo ties, and cowboy hats. I can still hear them playing that hardcore twang. But that was my parents’ music.

Keith taught me that country music was cool. “Country Honk,” “Dead Flowers,” “Far Away Eyes,” and “You Got the Silver.” I started listening more closely, and once I started digging, I realized that Bob McNett, the dude that was playing the square dance in front of the Rexall, was an original member of Hank Williams’ Drifting Cowboys. Now how cool was that?

I used to listen to Johnny Cash records with my grandmother. She was a huge fan from the beginning. All her friends told her he couldn’t sing, but she didn’t care. He reminded her of her brother Doyle, who had been murdered before I was born. I have his picture on my steps. I see it.

“Grandma, what is cocaine?”

I still have her piles of newsletters from the Johnny Cash fan club.

When Keith Richards sang “Love in Vain,” I noticed the name Robert Johnson on the album. Not long after that, I had a song playing in my bedroom with a guy wailing away about having a hellhound on his trail. Then came Johnny Lee Hooker, Chuck Berry, Howlin’ Wolf and, of course, B.B. King.

My father and I used to go see B.B. play whenever he was in the area. My dad wasn’t a musician, and he didn’t know much about the blues, but he related to B.B. King. B.B. sang:

“I bought you a brand new Ford / You said I want a Cadillac / I bought you a $10 dinner / You said thanks for the snack / I let you come live in my penthouse / You said it was just a shack / I gave you seven children / Now you want to give them back.”

My father would laugh like he was watching Al Bundy on “Married with Children. “That poor son of a bitch,” he would say while laughing his ass off.

One time, we went to see B.B. and we got into a meet and greet on his tour bus. I was pretty nervous. I mean, what do you say to a guy who helped you find your life’s passion? We sat down, me on one side of B.B. and my dad on the other. Before I could say a word, my father said, “B.B., I love that commercial where you prick your finger.” I sat there silent, listening to the King of the Blues and my father talk about their diabetes. I hardly said a word. He signed my dad’s hat and we left. B.B. and my dad are gone now. I still have the hat.

Sometimes on an off night, Kelly and I sit down and listen to music for hours. We’ve been doing it for years. The “Sticky Fingers” album is in the rotation. So are some old country, blues, and soul… and dozens of artists that were influenced by those styles. A lot of the music I personally recorded gets mixed in too. The soundtrack from under our feet mixes nicely with all the household names. Like a late night snack of Coca-Cola and homemade pumpkin pie.

I could go on for another 8,504 words, but everybody has stories like these. I think you get the point.

Everybody has a soundtrack. And a real person writes it, records it, and introduces it to the world. What an honor it is to be a musician.

I have never met Keith Richards. If I did, I would thank him for introducing me to mine.