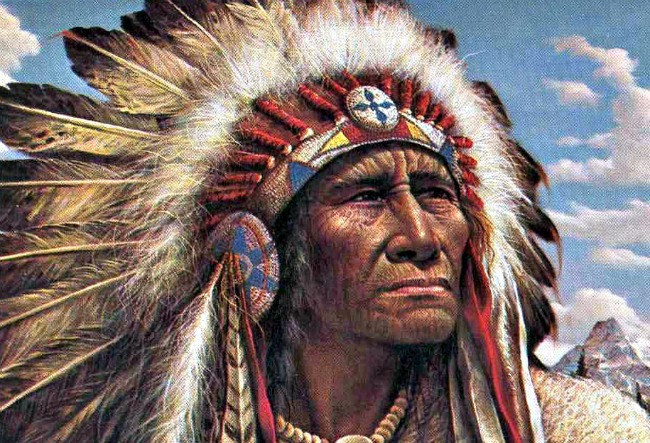 In many Native American cultures, there was a custom called a “potlatch” ceremony. A potlatch was an event where a chief would give away all his possessions and wealth to members of the tribe. Sometimes, certain valuable items were even destroyed. The purpose of this was twofold.

One, by accepting the gifts, the members of the tribe granted the chief his power. And the chief rose in social standing each time he held a potlatch. Basically, “Yeah, man, we accept your gift and we approve of your position. Keep doing what you are doing. We’re all good here. Can’t wait ‘til the next party.” Secondly, by giving away all his stuff, the chief proved that his power did not come from his possessions – it came from him (his wisdom, his influence, and his leadership). And it came from the people who continued to support him.

Now, the dude was penniless (or “stuffless,” as chiefs didn’t use pennies), but he would walk away from the shindig more powerful and respected than ever. Then he immediately started building up a new stockpile of stuff, only to give it away again. Yeah, these chiefs were pretty badass.

Cut to America 2016, where we have prospective chiefs arguing about the size of their willies and the billions of dollars they have (and you don’t have, by the way). Can you imagine the potlatch custom in this environment?

Don’t worry, the white people outlawed potlatches as “un-Christian” and “un-American” long ago. We are safe now…

In a musical sense, we now have a rapper who blows millions of dollars and then asks the tribe for more money so he can fill their world with more beautiful sounds. Generous guy, this new music chief.

There is a point to all my babble here. The point is that, in the long run, respect, love, and admiration are granted, not demanded or purchased. And they are granted by giving something away – by giving away something of yours to make someone else’s life a little richer.

Now, musicians don’t like to hear the word “free.” Free means money and time spent making a recording that someone just listens to on YouTube for nothing. Free means doing a gig for “exposure.” The “E” word, surpassed only by the “O” word: “opportunity.” Free sucks. Free puts people out of business.

All this is true, but read on…

I’m going to use myself as an example. Around the year 2000, my compadres Paul Smith and Ron Simasek got together and started recording. No expectations really. The band was called The Cellarbirds, and the resulting album was “Perfect Smile.” We were crazy proud of the record (still are), and when it was done, we decided to put some money behind it. We found national distribution, hired a radio promoter, and got started.

Within months, we had airplay scattered all over the country. We were doing some gigs, too, a few clubs and a few cool opening slots around the Northeast. But we were also spending money… and that was running out.

Then we got a lucky break. A big station in Indianapolis wanted to add our tune. Also, they wanted us to fly out and do a show. The hope was that we could use this station as a selling point for other big market stations that were close to adding the record. And, yeah, we wanted to sell some records.

We went out there and did a great gig. The station was pounding the single 24 times a week. Our distributor put us in kiosks with price and positioning through all the big chains in Indy. We did interviews and a ton of press.

The radio station took us out to dinner and was asking us how our new label was treating us. We said, “Oh, they are small, but hungry.” Our label was hungry all right; we were all sitting at the table.

Then we flew back home and waited for the next week’s Soundscan numbers to come out.

Then they came. There was a little bump, but basically a small change in sales. I was disappointed, to say the least.

I called the radio promoter. “We were all over the radio and our sales barely budged.”

“We played to a couple thousand people.”

He mumbled, “One gig isn’t going to send your sales through the roof.”

“We were all over the big chain stores.”

He was getting more annoyed now. He replied, “Price and positioning doesn’t guarantee sales.”

Finally, I said, “If being all over the record stores, playing to thousands, and getting played on the radio every 20 minutes for a week doesn’t sell records in a town, what does?”

Then I got one of the best pieces of advice in my music career. Our promoter Jon said, “Look, this record is a gem. But if you are spending your last dollar on this, I’d say don’t waste your money. But, if you are looking to build the brand of The Cellarbirds, this is how it’s done.”

I stopped promoting the record within a few weeks. We had the resources to play to the 50-yard line, but not the end zone. Time to punt.

The error in our ways was not in the music; it was in our estimation of what it took to excite people about the music. We were visible, but faceless. What we should have done was concentrate on a much smaller circle (the Northeast, for example, instead of the whole country) and connect with people on a deeper level. In whatever way possible… and over a longer span of time.

And doing that doesn’t necessarily cost a lot of money. But it does require giving something away.

Whether it be playing free gigs or giving away the music itself, let the people have some stuff. If you are lucky, they will grant you the position of being the architect of “their jam.” And, ultimately, that’s really good for business too.

Things have changed a lot since we did that record. The sales we did get on “Perfect Smile” would be a raving success by today’s standards. But many of the same philosophies still hold. At the end of the day, that project was not ill-fated. The jangly sound we created on that record caught the ear of a large ad agency. We did a cover of “Keep on the Sunny Side” with K8 that ran as the worldwide campaign ad for Days Inn… for 6 years. If we are keeping score, that was worth way more financially than the record itself. Also, a solo artist John Blair hired The Cellarbirds for a cover of the Velvet Underground’s “Sunday Morning” for a compilation. The resulting recording was endorsed by Lou Reed himself. John has even told me that Lou was doing a live version that sounded like our arrangement. Also, the title track, “Perfect Smile,” was recently included in the independent film “All in Time.” It has been 15 years, but I have a feeling that record isn’t done yet.

Yeah, we lost the forest in the trees, but the moral is that the real value we created with that record was the music itself. That was what connected. And that cost next to nothing, comparatively. We did what we loved and gave it to the world; that is what drew the right people to it.

There are bigger success stories for sure. But the concept is the same – build something great, give it away, and the people will gather. Then repeat.

Whether it be a great live show, recording, or whatever, if you have fans, you have a career. If you have a tribe to give something away to, you are a successful chief. And if it’s money you are worried about, capitalism loves someone who can attract a crowd.

I’m not suggesting that all music should be free or that it is wrong to get paid. Not by a long shot. I just think it’s a tenuous way to keep score these days, especially in the early stages of a project. It’s kind of backwards. Instead of worrying so much about making the cash register sing, just worry about making great art. Then run that up the flagpole and see who salutes. If enough people salute, the cash register (and the guy who owns it) will too… eventually.

I hear musicians complain about not getting paid for their work. They say, “When a guy buys a beer, he tips the server a dollar for pouring it. But when I ask the same guy to pay a dollar for a download of a song that took me two weeks to make, he complains about it.”

This sucks, no doubt. But the difference is that your boy forgets about the bartender’s pouring skills the minute he gets the beer. He might listen to your tune for the rest of his life. And see you live a dozen times. And play your song at his wedding. And tell dozens of friends about you. A free download is a small price to pay for all that.

The bartender is out of luck until the guy needs another drink.

It’s a long road, but try and keep that in mind.

I’m going to leave you with a quote from the book “Tribes” by Seth Godin:

“If your organization requires success before commitment, it will never have either. Part of leadership (a big part of it, actually) is the ability to stick with the dream for a long time. Long enough that even the critics realize that you’re going to get there one way or another… so they follow.”

By the way, you can download The Cellarbirds’ record here. For free, of course.

So whether you are an Indian or a chief, keep the wisdom of the potlatch in mind. You’ll be glad you did.

And, remember, karma doesn’t always have to be a bitch. Give her what she wants and she’s quite generous, actually.

YEAH, YEAH, YEAH, ALI: RSVP etiquette – 5 things NOT to do when you’re invited to an event