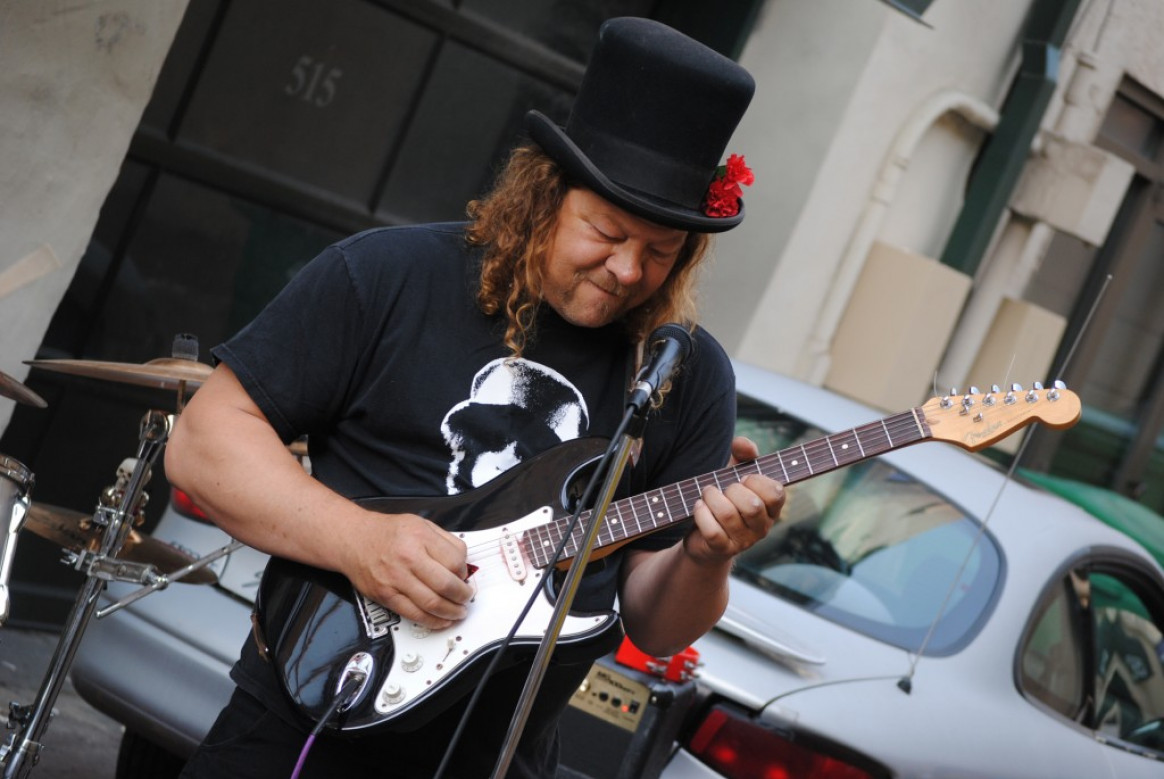 Walter Prezelski, better known throughout the Northeastern Pennsylvania music scene simply as Walter Prez, was the definition of a true original.

If that wasn’t apparent in his towering stature, long hair, black shirt with checkered pants, and iconic top hat complete with a bright red flower on the side, it was clear in his distinctive voice on the soulful rock albums he left behind after passing away unexpectedly at the age of 50 on Feb. 11.

The Scranton singer/songwriter, guitarist, and frontman of Walter Prez and the Awesome was a local legend, always following his own path and inspiring countless other musicians to do the same, so it’s only fitting that Jay Luke, one of his many musical friends, has organized a memorial show for him at one of his favorite places to perform and listen to others.

“One for Walt: A Night to Remember the Music and Legend of Walter Prez,” featuring performances by Luke, Fred Emmett, Paul Martin, The Disorders, d’ED & BURY’d, Terry Childers, Chuck Silsby, Bradley Parks, Sucker, and The KLAP, will be held on Friday, March 18 at 7 p.m. at the Irish Wolf Pub (503 Linden St., Scranton), where Luke first met this “Soldier of the Awesome.” Proceeds from the evening will benefit children fighting cancer at Janet Weis Children’s Hospital in Danville, as kids were near and dear to this gentle giant’s heart.

We reminisced with the 37-year-old Throop resident about Prez’s tunes, personality, and lasting legacy before the concert. 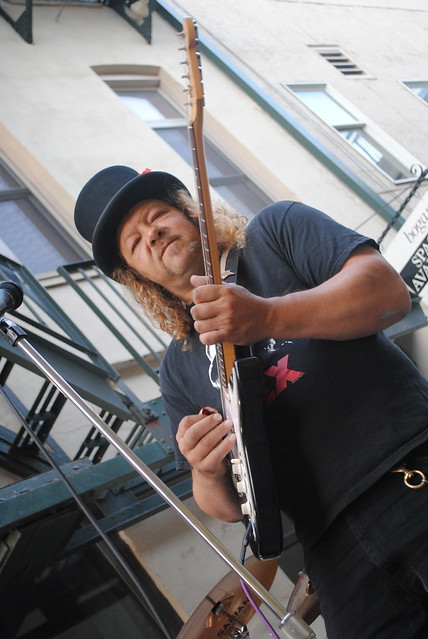 NEPA SCENE: Do you remember the first time you met Walt?

JAY LUKE: The first time I met Walter was at an open mic night. I think it was in 2005. My band, The MESS, had been trying to play in the Scranton area and I figured I’d check it out. The place was the Judge and Jury (now the Irish Wolf Pub). That night, I remember seeing this huge guy walk in, and he just exuded rock ‘n’ roll from the very first glance. He played with such passion and sounded like no one else I’d ever heard. I came home from that night and, until I die, I will never forget it. He left such an impression on me.

NS: How would you describe Walt? What was he like?

JL: Well, as I said, I was taken aback first seeing him; I didn’t know what to expect. He seemed like he was capable of clobbering you with his enormous hands, but the truth was so opposite. He was the kindest man I’d ever known. He supported every single artist he could. He bought everyone’s CDs, shirts, and merch. He was everything good about the “scene.” I can’t even fathom the amount of local artists’ albums that must have been found by going through his belongings after he passed. I truly cannot say enough good things about him.

NS: What are some of your favorite memories of him?

JL: I have so many fond memories of Walter. We have performed so many shows together. I guested on many of his albums. One memory that stands out was during an open mic night; I heard someone drunkenly yell out “Stairway to Heaven!” likely thinking he’d never give that a go. Well, they were dead wrong. He played the entire song on his acoustic guitar, solos and all, and as if it wasn’t badass enough, he followed it up with Black Sabbath’s “Heaven and Hell,” solos and all. It was just amazing.

Another golden memory I still laugh about was during a night recording at WVIA Studios. When he was through with his own tunes, he asked if I’d like to record Johnny Thunders’ song “There’s a Little Bit of Whore in Every Little Girl.” To say it was hilarious is an understatement. There we were, sitting with the props of “Sesame Street” around us, singing these lyrics. I think everyone in the building was laughing. He had such a sense of humor.

NS: What do you think is something that many people didn’t know about Walt?

JL: I think most people assumed Walt was rock ‘n’ roll all the time. While that may be true, he was also a quiet guy who loved tending to his garden, adored his family and little nephew, and absolutely loved to help children. The reason we are raising money at his memorial is to help children battling cancer.

NS: Let’s talk about his music. How would you describe his sound?

JL: Walt’s sound was completely original. No one could copy him, and he tried to copy no one. His voice was as unique as his guitar playing. He always walked his own path and never once gave a second thought about following any trend. He was such a hero to me for that.

NS: What kinds of things did he write about in his music?

JL: I think what I loved about him most was how he only drew from real experiences. Each song was a personal story and a window into his life – sometimes good, sometimes bad. He wasn’t shy about a thing. He let it all out when he wrote – straight from the heart, always.

NS: What kind of insights did he share with you about his music?

JL: We would talk for hours about our mutual influences and shows we’d seen. We bonded over the New York Dolls, KISS, Motörhead, and Van Halen, as well as many bands no one had ever heard of. I miss those talks.

NS: What struck you about his performances?

JL: Seeing Walter was just like witnessing something true, real, and right from the soul. He felt every word, and he made you feel them too.

NS: What was performing and recording with him like?

JL: I mentioned some instances earlier, but every session with him was just fun. He’d always have a rough idea and let whoever was performing on the album do their own thing. It was very organic.

NS: He was a big advocate for other artists in the local scene.

JL: He would often come out to see three or four bands play, even if they were in separate counties in the same night. He’d buy your shirt, your album, your pin. You couldn’t have asked for a better friend in the local music scene than Walt. He was the best.

NS: Walt also enjoyed photography and drawing. Why do you think he was so artistic in so many ways?

JL: I was surprised when he passed just how many people posted his drawings as their profile photos. When he was attending gigs, he would bring his sketch pad and go at it. His catalog was way bigger than I had thought.

Walt was naturally observant of people, and I think he was genuinely interested in who people were and wanted to try to capture them. That might be another reason he believed in the local art and music scene; he was truly interested in people and their art.

NS: In interviews and general conversations, he seemed to be very thoughtful and philosophical. Did he talk to you about those types of things?

JL: We used to talk about everything. He was a very honest guy. If someone had hurt him, he would let me know and, most likely, he’d write a song about it. He was fearless as far as that went. If you needed someone to turn to, he was always there.

But he would enjoy discussing just about any topic. He was truly interested in people’s thoughts and words, which is rare these days.

NS: You wrote a song for Walt. Can you talk about that a bit?

JL: I was so sad learning he’d passed that I wanted to honor him in a special way. I’d been recording my solo album and was about to go in for another studio session. I got out all my Walt albums and scanned his song titles. My idea was to create a story about Walt using his own song titles. It’s one of my favorite tracks that will be on my solo album. I titled it “One for Walt” and got Walt’s former band members: Slug on bass and Anthony Turco on lead guitar. I sang and played rhythm guitar.

The bonus is one of Walt’s favorite drummers, Carl Canady of The Rods, rocks the drums on it. Carl wrote one of the last songs Ronnie James Dio ever sang on, so it would definitely have made Walt smile, I’m sure. I can’t wait until it’s released. I think people will really like it.

NS: He was a regular at the open mic you host at the Irish Wolf Pub, and they left his favorite drink out for him at the next event after he passed. What was that night like?

JL: For me, that was sadder than attending his viewing. All night long, I’d turn my head to look out at the street, waiting for his vehicle to pull up and see his top hat come in with his guitar in hand. He rarely, if ever, missed open mic in all the years I have been hosting. And everyone there that night cried. It finally hit us that we would no longer see our friend there again.

NS: What made you decide to put this memorial show together?

JL: I felt that a guy so original never got his due while he was alive. It’s sad that the statement “everyone loves you when you’re dead” is so true, but it took him passing away for many people to take notice of how important he was. I wanted to make sure he had a sendoff he deserved.

I got swarmed by so many people that wanted to perform in the memorial show that I was a bit bummed that I had to turn people away; the night filled up so fast. I hope that everyone will stop in to pay respect to a true original.

NS: How did the lineup for this show come together?

JL: The performers for the evening all either used to perform with Walt or were longtime close friends with Walt. I think he would be really pleased to see this group of performers on the bill. We all loved him.

NS: How did you choose the charity that will benefit from this concert?

JL: When we went to Walt’s viewing and spoke to his family, they expressed no interest in accepting any of the proceeds from the show. They told us to do something with the proceeds that Walt would have done, and that was to use the money to help children. We chose to donate to the ongoing battle of children fighting cancer, so the proceeds will go to Janet Weis Children’s Hospital.

JL: I’d just like to thank everyone who expressed interest and asked to help. I really hope we get a good turnout. Come laugh, come cry, come rock. We will be playing sets of live music with Walt’s albums spinning in between sets and people sharing memories. Come out and have “One for Walt.”