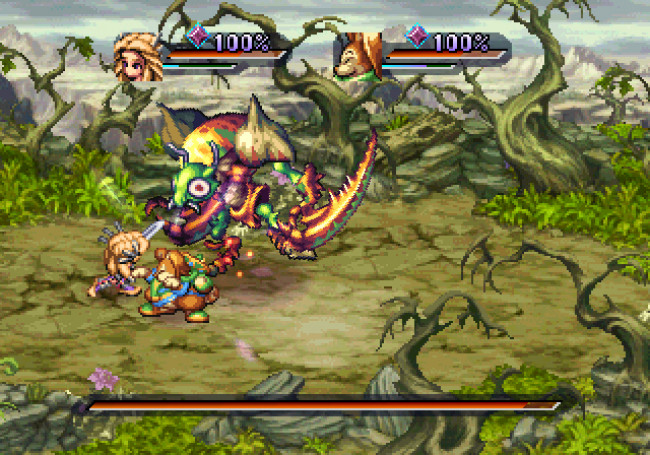 As in all forms of entertainment, a blossoming video game franchise struggles with the possibility of being labeled a “one-hit wonder” of sorts, with developers only being able to “capture lightning in a bottle” once before the franchise fades into obscurity. The greatest source of this struggle seems to stem from the transition from one console to another.

For every famed video game mascot or established franchise that say, made it big, or even bigger, on the Nintendo 64 or beyond, there are those whose fame and reputation was tarnished past the days of 2D stardom. So you can imagine the anticipation and anxiety as the “Secret of Mana,” one of the most popular titles on the Super Nintendo, was going to somehow make its way onto a PlayStation console.

Now, keep in mind, we’re not saying this was to be “Secret of Mana: The PlayStation Edition” or something like that, but if you were a gamer at this point in time, any title with the word “Mana” in it certainly had big shoes to fill. Today on Turn to Channel 3, we take a look at “Legend of Mana” on the original PlayStation console!

Within the realm of RPGs, especially on the PS1, which boasts many superb examples of the genre, I think it is pretty safe to say that “Legend of Mana” has one of the best and yet underrated soundtracks on the console. With music that is elegant and ethereal, as well as intense and emotional, the world of “Legend of Mana” is beautifully accompanied by some truly amazing tracks.

In addition, the sound effects present bring you into the world you’re becoming accustomed to by putting just that little bit of spice into the events, big or small, that your character becomes a part of. This is especially important in fleshing out the many different characters you encounter, giving them some distinct and sometimes hilarious personalities.

The artwork in “Legend of Mana” looks like something out of a children’s storybook or, perhaps, a long forgotten medieval fairy tale. There are times when you see something that literally looks like it was painted on by hand. While there are also times when the action gets so close up it becomes grainy and pixelated, for the most part, you’re transported into a world that is both mystical and fun in appearance, and that’s just the right fit for this game.

The best way to properly express this experience would be that, while the SNES title was trying to keep itself a secret, “Legend of Mana” bursts forth with color and charm on the artistic side of things. Even the maps of the towns you visit look great!

“Legend of Mana” is a fun game to play, adhering to the established “Mana” style of action RPG, with elements of timing as well as precise planning of items on a map, branching storylines, and some truly epic side quests, bosses, and added elements like creating creatures to assist you in battle. There’s a lot packed into this game, which is bittersweet in a way because, as much as there is for you to do, you can often get confused regarding what you have to do next. While this definitely has a bit of a downside to it, it also encourages exploration, talking to various characters you meet and doing things in a fashion that isn’t always distinctly linear.

While grinding is important, I don’t feel it is as important as it would be in other PS1 RPGs. Your main character, whichever you choose, is about dead equal as far as strengths and weaknesses go.

The truth about “Legend of Mana” is that, unlike its predecessor, it really isn’t about your main character at all, but the story and the various characters you must assist in your journey. They are the real stars of this show, and that’s actually a breath of fresh air when you really stop to think about it. There’s nothing wrong about creating an iconic RPG star, or even a nefarious villain that goes down in RPG history as one of the most feared, but there’s a simple, whimsical bliss about “Legend of Mana” that really can’t be described; it must be experienced to fully understand.

I hope you enjoyed this review, and I hope you’re enjoying this beautiful weather we’re having in Northeastern Pennsylvania right now. Go out, have fun, and enjoy yourself.

Next week, we look at “Theme Park,” a game that wandered into my life out of nowhere as we continue looking at PlayStation games all this month.

Enjoy the sunshine, but also make time to game on!