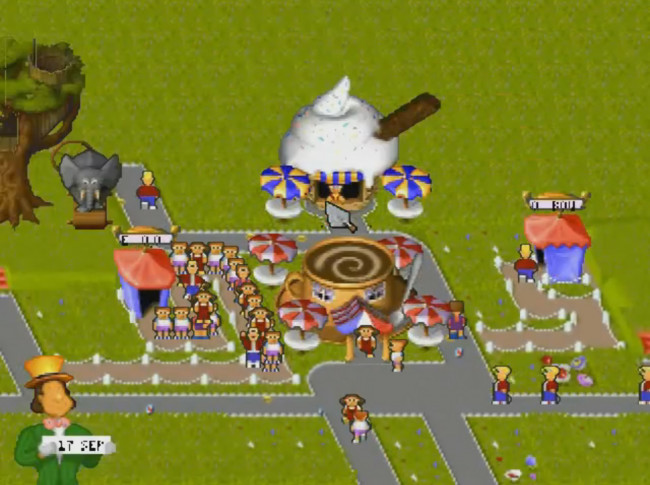 One of the many reasons I decided to feature games on the original PlayStation console this month is because there were so many games to choose from, and I feel that, like the original Nintendo console, that is what made the PlayStation such a mainstream success, ushering in a whole new generation of gamers.

However, because there were so many games, for every “Final Fantasy VII,” “Twisted Metal,” and “Crash Bandicoot,” we were also “blessed” with some games that appealed to a very niche audience, leaving the core PlayStation demographic scratching their heads as to why a game like today’s topic was even made.

Is having a console library with something for everyone really a bad thing? I don’t believe so, and yet, at nearly 35 years of age, I still wonder why this game appealed to me in the first place. Today on Turn to Channel 3, we take a sharp turn down a road of weird as we review “Theme Park!”

What’s difficult to determine if “Theme Park” truly has a full soundtrack because there isn’t a lot of actual music involved – at least not enough to constitute a full song in most cases. Yes, there’s music at the beginning and, yes, each ride has its own little jingle, but that being said, there isn’t anything that jumps out at you past the stereotypical jingles and sounds you’d hear at a theme park. I mean, sure, the game is called “Theme Park,” but this game came into the lives of gamers before “RollerCoaster Tycoon” rolled in, took the ball, and ran with it.

In 1995, there were games with solid soundtracks, some of which were brand new kinds of games, or at least a different style, so why “Theme Park,” a game that was doing something few other games on the PS1 were doing, couldn’t come up with a half decent soundtrack still baffles me.

One other thing – the sound effects, while great the first few times, can become very grating due to the repetition of it all.

The problem with the graphics in “Theme Park” is that, while bright and full of color most of the time, they are often so small you need to squint to fully grasp what it is you’re looking at. This is especially true (and especially frustrating!) when you’re trying to read the buttons you must push as you go through the many menus.

I’d also like to add that every park has the same start, the same green grass, regardless of what country you have a park in; it’s not just silly, but lazy on the part of developers. This is especially odd because the game, and others like it, are built largely on humor – British humor, in fact – so you’d think developers would want people to enjoy the “Monty Python”-esque idea of a theme park in the middle of the desert, or in some barren wasteland in Siberia, but you get none of that, which is quite disappointing.

I really do enjoy playing “Theme Park,” but the problem with it, like many classic simulation games, is that the fun isn’t in playing it straight through the fair and proper way, but in putting in a cheat code for unlimited money and all rides, shops, and employees unlocked, which kind of sounds familiar in a way, doesn’t it?

The rides are cool, although some break down more so than others, and even though seeing some of them in a demonstration with full motion video is kind of cool, what isn’t cool is how many times you hear what sounds like a child gagging, which I guess means kids are not happy at the park.

“Theme Park,” in some ways is still quite fun, but it can get boring rather quickly.

All in all, “Theme Park” is an average game with moments of greatness that are for all the wrong reasons, like when hooligans come into your park and rough up your mascots before security throws them out or when you build a roller coaster so dangerous that it throws customers off and the doom of a lawsuit floats around in your head.

If I can compare the “fun” someone can have with “Theme Park” over two decades after its original release, it would be the equivalent of removing the ladder in a swimming pool in “The Sims” or making a box, putting a Sim in it, having them cook with poor cooking skills, and not adding a door in the box. “Theme Park” is a great game for individuals with twisted minds. Other than that, it is more of a nostalgia piece at this point.

Speaking of twisted, next time on Turn to Channel 3, we ride along with the demented clown Sweet Tooth in “Twisted Metal 2!”

Until then, hunker down because spring is nearly here, which is another great time to game on!