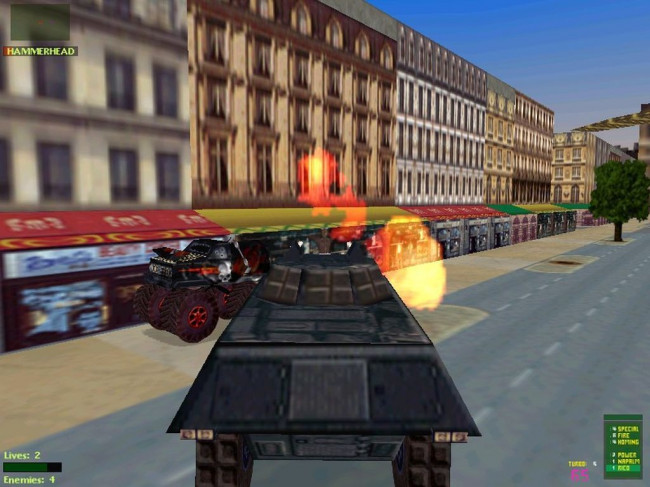 The general belief with sequels to video games is that they fix a lot of the issues gamers may have experienced in the original, but this isn’t always the case. Oftentimes, developers continue on the same path, simply branching out stories, adding a few subtle or necessary features, but keeping the core gameplay exactly the same.

Early on in the days of Sony’s emergence on the console gaming scene, simplistic and yet addicting games were what brought gamers through the door, and today we’re going to get as simple and yet exciting as they come (at least to some folks), as this week we look at “Twisted Metal 2” on the original PlayStation!

“Twisted Metal 2,” also known as “Twisted Metal: World Tour,” has a soundtrack full of great rock tunes, most of which are totally stereotypical rip-offs of music we Americans believe we’d hear at some of these locations around the world, but that aside, I really loved most of the music I encountered here. In truth, though, that really isn’t what you play “Twisted Metal 2” for anyway, now is it?

No, it is for the sound effects of weapons, tires screeching, and people getting blown to bits, and it’s all pulled off rather flawlessly, I must say. While the soundtrack doesn’t have a ton of depth, does it really need to?

I will go on record and say that no, the graphics in “Twisted Metal 2” haven’t aged well but, truthfully, most games for the original PlayStation console haven’t all these years later. What once looked state of the art is now reduced to grainy and sometimes blurry images, but there’s still a lovable, cheesy charm to the sometimes hideous-looking chunky polygonal graphics of “Twisted Metal 2.”

The environments you blast your way through still look pretty good, though, as do the combatants, and that’s always a good thing to say in 2016. Keep in mind, kids, sometimes the most engrossing games don’t always have the best-looking graphics.

That brings me to the point of gameplay. In the same way that “Road Rash” titles are still a blast to play, there’s enough in “Twisted Metal 2” to keep you entertained for quite some time. The levels really are fun, and learning the various weaponry for your combatants is also a balance of fun and strategy at times. In the end, it really is just about blasting away your opponents without being taken out first, and that’s still just as much fun now as it was during the peak of “Twisted Metal’s” success.

There isn’t much of a story to this game, but what is there is both creepy and cool at the same time. Who thought a psychotic clown driving an ice cream truck could make so many gamers happy?

“Twisted Metal,” as a franchise, took elements from “Road Rash” and destruction derby and really flipped it on its head with over-the-top characters, the ability to blow up international monuments, and strong encouragement to gun down your enemies and watch them burst into flames. You know – good old wholesome family fun. If you’re looking for a PlayStation title that is big on nonsensical, malicious destruction, then it truly doesn’t get much better than “Twisted Metal 2.”

Well, I hope you enjoyed this review. Have a great Easter as we prepare to look at our final PlayStation game for the month – a title known to hack and slash fans as “MediEvil!”

Until then, in between the food, candy, and colorful Easter eggs, be sure to make time to game on!