This week, we have some West Coast-born Double IPA goodness from those fine folks over at Heretic Brewing in California – Evil Cousin! 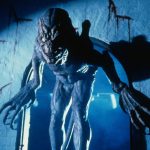