We’re hopping into my own little wayback machine with some vintage Massive Beer Reviews!

I have a backlog of random reviews that I did over the past couple of years that need a tendin’ to, so first up, here’s some American barleywine goodness I filmed back in June of last year – Victory’s Old Horizontal! 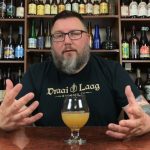