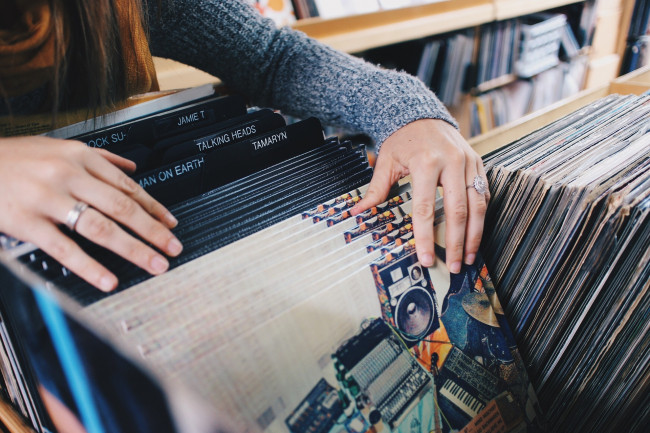 For the past eight years, the third Saturday in April has made music lovers feel like kids in a candy store.

This Saturday, April 16 will be no different as Record Store Day once again brings hundreds of limited edition vinyl records to independent record stores nationwide.

“There will intentionally be fewer titles this year,” said Gallery of Sound owner Joe Nardone Jr. “Last year, with about 450 releases, there was maybe too much – way more than anyone could buy or sell in one day.

“They have really raised the bar on what is an official Record Store Day release this time,” he continued. “They tightened it up a little bit, which I think is good for everybody.”

This year’s list includes about 350 titles from artists in all genres, including Bob Dylan, Johnny Cash, John Coltrane, The Flaming Lips, Gwar, Lil Wayne, the Sex Pistols, and Five Finger Death Punch.
Artists such as Madisen Ward and the Mama Bear, The Sonics, Langhorne Slim & the Law, and Stephan Jenkins of Third Eye Blind will release live recordings made in record stores.

There will also be a highly-anticipated Record Store Day Disney Cruiser turntable made available for the first time, and records geared toward younger listeners by artists, such as The Weeknd, Justin Bieber, and Twenty One Pilots, plus a Disney compilation and a Hello Kitty picture disc.

Metallica, the official ambassadors of Record Store Day 2016, will honor the victims of last year’s tragedy in Paris with the release of “Liberté, Égalité, Fraternité, Metallica! – Live at Le Bataclan, Paris, France – June 11th, 2003.” All proceeds from that release (reported to be 10,000 CDs) will go to charity.

“We love how RSD caters specifically to independent brick and mortar stores that have survived,” said Musical Energi owner Jay Notartomaso. “It’s fun to have unique items that are available only to independent small businesses. It makes us feel special because we are.”

Notartomaso, whose store will have music spun by DJs Nate and Matt all afternoon and evening, plus a live performance by Mock Sun at 7 p.m., credits Record Store Day with helping his store grow.

“At the beginning in our old location, these were the only new releases we had,” he said. “But now we have thousands of new releases and reissues, as well as hundreds of thousands of used records, CDs, DVDs, and cassette tapes in stock. We probably do as much sales in the used or existing items as we do with the special releases that day.”

The Mundy Street location of Gallery of Sound will feature live music from national recording artists Young and Heartless from Harrisburg, plus local favorites Skip Monday, Aaron Fink and the Fury, Dustin Douglas and the Electric Gentlemen, Charles Havira with Kris Kehr, and Nick Driscoll. Live music begins at noon, and in-between sets will feature RSD vinyl spun by Nardone and his sons.

Nardone said the hottest item, though, might be one that was added at the last minute.

“Jack White is always a big proponent of Record Store Day, and this year he is releasing ‘The Peel Sessions’ by The White Stripes,” he said. “There’s one red record and one white record and it’s never been out before, or at least not on vinyl.

“Hopefully that should get here in time.”

For a complete list of participating stores and titles available, see recordstoreday.com.