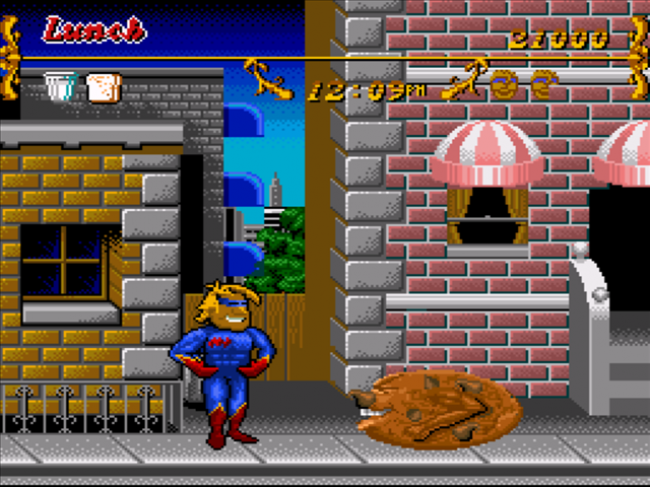 Some people believe that reviewing classic video games is both fun and easy, and while I won’t argue that I do enjoy reviewing games here on NEPA Scene, to say it is an easy job would be completely incorrect. I carefully lay out a schedule for myself, and sometimes I’m happy with the results, but sometimes I just wonder why I chose a game that either a) seemingly everyone has already talked about or b) chose the list of games I just did for April.

Of course, I remember that every April, in honor of April Fool’s Day, I pay homage to some games that, well, may still be giving some folks nightmares. No, not in a “Holy crap, it’s a zombie in my face!” kind of way, but more of a “Why did someone create this foul creature of a game?” kind of way. April is “No, this is really bad” month here on Turn to Channel 3!

As in last year’s inaugural month of some truly horrid games, we begin with a title that perhaps, in its early stages, had a lot of good intentions, but that’s the thing with good intentions in gaming – usually bad developers take something that is meant for good and twist it to become more vile than Voldemort and Sauron combined. If you don’t believe me, trust me, by the end of this review, you will, as we begin this regrettable month with “Captain Novolin,” a Super Nintendo game that was all about trying to teach folks about the dangers and proper care of diabetes.

I’m sorry, “diabeetus,” for those of you who speak Wilford Brimley. Yes, kiddies, today Uncle Nick takes you on a journey – a creepy journey with an equally creepy protagonist and a promise that, damn it, by the end of this game, you’re going to know so much about diabetes (or what this game believes you should know) that you’re either going to jump right into the medical profession or seek therapy for some of the bizarre things you see playing this title. Are you ready? Well, don’t say I didn’t warn you.

Imagine some of the cheesiest, most grating synthesized music in an SNES game and then make it loop from level to level, seemingly without end. Repetition is the name of the game with “Captain Novolin,” and the soundtrack is certainly no different, with less than half a dozen songs for you to do anything but enjoy.

The sound effects are pretty bad too, with jumping enemies (more on them in just a bit) and literally no audio for the main character, enemies, or any of the non-playable characters you encounter. While I’m fairly certain all of these would be just as annoying as the rest of “Captain Novolin,” there’s this tiny part of myself that always wished the Captain had a Dudley Do-Right kind of voice because, well, it wouldn’t save the game, but it would at least give you another element to laugh at, and that’s kind of a good thing, right?

While gamers poke fun at how strange Captain Novolin is, in truth, there’s more to be said about some of the creepy looking enemies you encounter, all of which are based on things diabetics are supposed to either stay away from or consume in moderation to keep their blood sugar in check. All of this is strange enough on paper, but giving them all human, demon, or even a hybrid human/demon faces just raises the creepy factor that much more.

Most of all, if you’re a child seeing this, your imagination has to be telling you, “Is this how diabetics see the world?” If you’re shivering at the thought of all of this, trust me, you’re not alone. I even told my good friend Aaron, “I have so much respect for you surviving the giant bouncing donuts and ice cream sundaes in motor boats this long.”

As I said, “Captain Novolin” is very repetitious, relying on beating you over the head with the premise of educating people about diabetes and teaching those who have it how to take care of themselves; you know, when they’re not dodging evil cans of soda with arms and legs. The environments don’t change much, and what’s worst of all is that Captain Novolin seems to start every conversation with, “Hi, I’m diabetic,” or “I have diabetes. What should I know about (insert a random situation, like mountain climbing or driving a speedboat)?” This really makes me wonder two very important things:

1. Was diabetes taboo in the ‘90s? Did people have to tell others about it as if they had an STD or hepatitis?

2. How much does diabetes affect one’s ability to drive a speedboat?

Did I also mention that this game could also give those same aforementioned children nightmares involving giant anthropomorphic sweets killing them if they don’t keep their diabetes in check? Because, hey, even Captain Novolin, who is an expert on the subject (or is by 1990s standards) can be knocked out cold by a rebel jelly donut.

Like games such as “Bible Adventures,” the actual message behind “Captain Novolin” is lost among all the ‘90s cheese, lack of entertainment and, oh yeah, the fact that video games should never be about diabetes. Seriously, when actual diabetics feel worse about themselves after playing a game like this, that tells you something. Mission furthest thing from accomplished, Captain.

Join me next time as we head back to the 1980s to take on the war on drugs. “Wally Bear and the NO! Gang” is the next atrocity to remind you that yes, sometimes video games are bad – very, very bad.

Until then, remember that even bad games shouldn’t scare you away from making time to game on!