TURN TO CHANNEL 3: Kryptonite is the least of gamers’ problems in ‘Superman’ for Nintendo 64 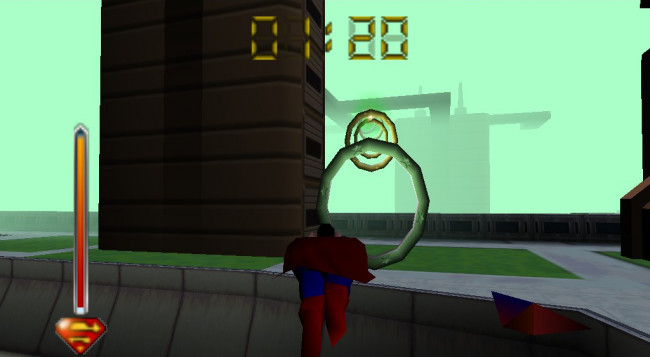 I think one of the biggest misconceptions we often had as children was that making video games was easy. This would especially come into play when we’d impatiently wait for the next entry in a game series. How could it possibly take so long to make a video game? Obviously, many years later, we have a better understanding of the struggles, both in modern gaming as well as those titles from the past we grew up with. All of this aside, I think there will always be this part of us that looks at a game that seemed easy to execute on paper and still wonder how it became so atrocious. The adage that spawned so many Internet memes instantly comes to mind. You had one job, video game developers – one job!

However, this is thankfully, and yes, mercifully, the very last of my reviews for the month of April, which means we won’t be looking at some truly dreadful and awful games until next year. But like every cheesy action movie ever made, we have one last arduous task to complete, and oh boy is it a beauty – and by that, I mean it’s awful. Ladies and gentlemen, put the children to bed, because this could get ugly. Today, we look at “Superman” on the Nintendo 64.

Even in the realm of video games, one built on fiction and bombastic ideas, there can be what is the equivalent of canned laughter, where something is blatantly fake and forced it is sickening, and “Superman” is chock full of what sounds like stock audio in the soundtrack. Nothing seems orchestrated, composed, or developed at all. Listening to “Superman’s” N64 soundtrack and then listening to, say, “Jet Force Gemini’s” soundtrack is like listening to a loop of dog farts, and after you’ve realized what you’re listening to, you pop in the greatest works of John Williams. Naïve people won’t catch the forced offerings you’d expect in a “Superman” soundtrack; let me assure you, it’s there in all its splendid “glory.”

The less said about any voiceovers and sound effects the better. Couldn’t they have found an avid 7-year-old fan of “Superman” to run this by first? Good Lord, I’d rather listen to a demo tune on an old Casio keyboard than this.

Look, I’m not here to say anything that hasn’t been said in regards to highly polygonal graphics during this era because they were running rampant, especially on the Nintendo 64. However, when you can see through Superman, there’s a problem. When seemingly every environment looks the same, there’s a big problem. When you can get stuck under a bridge or next to a poorly designed building, thus glitching the game and, at times, making it where you can’t even continue on, that’s the biggest problem of all.

As I was flying around an area, I realized that I’d rather be looking at those unfinished hidden sections on “Grand Theft Auto III” on the PS2 than this horrendous crap in front of me. Remember that 7-year-old I just said they needed to run the audio by? He could also draw a better game… with crayons.

All right, so now that we’ve skipped around the elephant and tiptoed to make sure it was still sleeping, let’s kick the jerk and get this party of awfulness started.

One of the biggest conundrums of our time, and surely one of the biggest mysteries in gaming, is how “Superman” was treated so poorly in many licensed games in stark contrast to how well Batman was taken care of all these years. The answer, partially, comes from those companies that held the license and, yes, the developers behind the games. It’s too easy to just point at this game and wonder what went wrong, to laugh at making Superman fly through rings, toss cars, and then do it all over again. Many gamers probably thought this was a prototype at the time, patiently waiting for a better game to come but, alas, it never came. One also has to wonder if, due to the ridiculous restrictions sent forth by the licensers, this was simply an ultimate F-U by those involved, the result of their frustrations.

This game is not fun. It wasn’t fun then, it isn’t now, and it won’t be in 2075 when a race of alien cockroaches rule the world and uncover this stinker in a bathroom of an old 7-Eleven. Speaking of uncovering things, playing that landfill discovery, “E.T.” on the Atari 2600, sounds absurdly appealing right about now. Even if you manage to make it through a set of rings, the illogical lack of time you get to do your next task will send you back to the rings. Is this how cops on those shows like “Law & Order” get the criminals to crack?

The biggest problem with “Superman” on the Nintendo 64, past the horrid graphics, stock music, and gaming experiences that feel more like work and less like fun, is that it didn’t have to be this way. If you go on YouTube, you can find video of the beta version of this game, what was supposed to be before the iron fists of Warner Bros. and DC Comics came crashing down with time constraints and weird policies, like not being keen on seeing Superman fighting “real” people despite the game being built on the storyline of Lex Luthor creating a virtual world of Metropolis, so no real people would actually be harmed. Did we mention that this is a video game and these are not real people anyway?

Oh, and let’s also throw in the fact that developers were told to limit the use of Superman’s powers, which is the equivalent of taking away all of Batman’s weapons and parking the Batmobile. The game was delayed by six months due to all of this and, in the end, less than 10 percent of the original design of the game was implemented in the final product. While Eric Caen, the producer of the game, felt that the original design was “too ambitious compared to what the N64 could deliver,” I think he would agree with the rest of the gaming world that says the beta version still would have been better than the garbage created in the end.

While an attempt was made to redesign the game for the PlayStation, even getting approval from Sony, the license from Warner Bros. had expired and Titus, the original developers of the game, were unable to secure a new one, causing the title to be scrapped in 2000. The bottom line here, kids, is that had Warner Bros. and DC Comics been adults instead of a bunch of big babies, we wouldn’t be talking about this atrocity to our super senses all these years later. That’s the worst part of “Superman” on the N64 – it could have been a terrific game.

Well, we made it through another month of terrible games. Next month is one I look forward to. Your favorite scribe turns 35, so I look at some games near and dear to my heart. Until then, thanks for sticking with me through this month and, remember, even horrible games are no excuse not to game on!