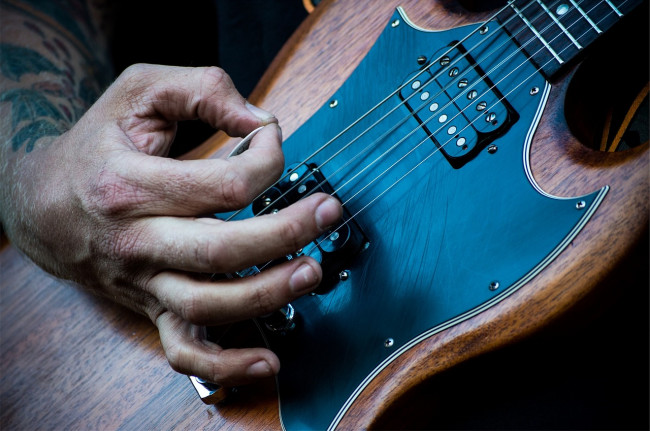 I am not a late bloomer. I had a beard in eighth grade – true story. It would seem, however, that after 30+ years of playing music for a living, I’m finally getting the hang of it. Here’s what the haps be…

I’m taking lessons for the first time ever.

Well, in reality, I had one or two lessons in grade school, but the nun who taught me was super mean and kept saying stuff about how if I didn’t practice more, Jesus would cry and shit, so I bagged it. From that point until very recently, I learned everything by ear.

There is a disappearing art to learning by ear, and although I am only now finding out the actual mechanics of it all, I developed my ear in a way that is prone to being overlooked in the advent of tablature and chords to a bazillion songs available to us all with only a few seconds of typing invested. The hardest part is finding out the name of the song (and, of course, Shazam does that, which is so awesome!).

But I do wonder if my ability to emote, to play with feel would have been curtailed or at least stunted had I not been forced to learn songs by playing the record or cassette, wearing a goddamn dead spot in the solo or snapping the tape from the jackrabbit fast-forward and rewind button slamming over and over in order to learn songs.

I use the Ultimate Guitar Tab app religiously now, and I know I would have when I was a kid, were it available. You’d be insane not to take advantage of such an astounding resource. Granted, there are some dead wrong tabs, but if you know anything about anything, you’ll hear it when you try to play it and move on to another version… which brings me full circle. Would I be able to hear that if I hadn’t labored for days or weeks over a solo by playing parts of it, lifting the needle, trying to find it on the fretboard, then bringing the arm back a few grooves, dropping it down and listening again, ad nauseam?

Tab is sort of like reading the synopsis of a movie. Yeah, you get the plot basics, but you can’t see the actors really nailing the performance. Learning a song by reading it is very fax-machine-esque in my tiny, but universally correct opinion, and you’re prone to play it with as much life and spunk as the sheet of paper you read it on. Now, if you’ve heard the song and have a good idea of how it goes but need to learn it with a quickness, tab is pure gold. However, if you’re trying to learn how to play guitar and not simply snagging the guitar parts of one song, it can be a double-edged sword.

Trying to figure out nuances that draw you to a piece of music in the first place is where I believe you start to find your own feel for playing, and the beginnings of your personal style are within those first realizations, those original “Aha!” moments. Straight technical repetition of notes is necessary for dexterity, but it ain’t terribly musical. Without delving into heavy critical listening in order to decipher just how the hell that guy is making you so sad or happy or whatever, you wind up as antiseptic as a hospital bedpan. Don’t believe me? Just try and listen to an entire album by Michael Angelo Batio, with his double guitar “dweedly dweedly weeeew weeew” horseshit. Dude has never bent a note in his life. Zero emotion. He probably didn’t even cry when James Caan died in “Brian’s Song.”

The soulless shredder ilk of the late ‘80s are living proof that all work and no play makes Jack an arrogant dick who plays unlistenable dreck. You cannot simply read rock ‘n’ roll, I’m sorry. You need to eat, sleep, and breathe that shit, unless you want to be plain flash with no soul.

Quite simply, only freaks like Les Paul, Chet Atkins, Eddie Van Halen and Roy Clark can jam a gazillion notes in each bar and still make you feel sumthin. They were born that way; you can’t read how to do that shit. There are a million lousy clones out there proving me right this very moment.

Feel free to disagree with me on this point if you’d like. You will, of course, be wrong, but feel free.

Now, the other side of this is that not studying the actual craft at all is stunting as well, and was my particular mistake. I, personally, hadn’t grown in any measurably steady way as a player in decades. Yes, I would pick things up from friends; when you’re a musician, all or most of your friends tend to be as well – something about the odd hours and a shared passion so intense it alienates non-playing folk quite a bit.

Every once in a while, something would catch my ear, and I’d stumble around the fretboard until I could ape a reasonable facsimile, but I was otherwise in a state of arrested development as far as my ability to play was concerned.

And as much feel as I’d acquired over the years by playing by ear, I was still unable to communicate as succinctly as I needed to, because I simply didn’t have the structural know-how. I was like a coal crackin’ valley hainahspeaker in Congress – “Well, youse guy, da ting here is dat weez gtsta pass allah deez lahs…” It was fucking frustrating, for me and the Speaker of the House.

…but I’m kinda lazy. So I just treaded water. And I sucked.

Serendipitously, however, the office next door to my attunements shop became occupied by none other than my old friend and monster player Neil Nicastro, where he set up shop teaching – you guessed it – guitar (and piano, something that has eluded me for decades. Another column, perhaps.). We’ve been bouncing around the scene forever, and I even tracked some vocals on one of his solo LPs back in the day, so it was a treat to have him as my new neighbor. Plus, I knew I could continue playing Sabbath on my stereo and hear some Django ripping from his room and it’d all be awesome. Probably not so awesome if an accountant moved in.

Well, I fix guitars, and Neil had a few that needed some work. I had decided I wanted to not suck anymore, so we worked out a gentleman’s agreement and exchanged services. It hasn’t been all that long, maybe a few months but, to me, it is like somebody finally taught me all the verbs in the English language and I was never aware that verbs existed! I can finally communicate!

Of course, it’s a little easier for me to learn more quickly because I’ve been playing a long time, and it’s easier for Neil to teach me for the same reason, so I am developing at an accelerated rate compared to a novice, but I still wish I hadn’t put it off for so many years.

It’s amazing to finally have the confidence and know-how I’d always wanted but wasn’t sure I could ever get. And I’m only starting! You can learn music forever and not even scratch the surface! It’s a lifetime of new discovery! Name one other thing that continues to give forever once you pick it up. Besides, like, herpes. But nobody actually wants herpes.

I’ve also been writing and rehearsing with a band again for the first time in over a decade, and I was really freaked going into it. I wasn’t sure I was actually even any good, but with rising confidence after a few lessons (and many hours of practicing those lessons! It ain’t like osmosis, y’all!), I have realized that I am, indeed, worthy and I’m only going to continue to get better.

This is massive stuff to a guy who’s been out of the game since the two thousand oughts and has something to prove to a new generation of listeners, although I’m kinda thinking it’ll be a lot of the same listeners as years ago, probably. And if that’s the case, the only hot chicks in the place will be there to pick up their dads because they can’t drive real good at night anymore, but… what the fuck was I talking about? Oh yeah! I will be playing, and I will be better!

Nobody’ll be let down, nobody’s fond memories of shoe-puking youthful debauchery will be marred by me not being able to live up to their expectations. I won’t be that guy people go to see and say, “Oh, that’s a shame.” I’ll be better than they remember. Ungh!

I found the balance I was looking for. My younger self was askeered to knuckle under and practice, because what if I practiced like mad and still sucked anyway? The safer bet was to be mediocre, but never risk failure. What a dumbass.

I simply have nothing to lose and everything to gain at this point. Lessons combined with a lifetime of experience can only make for great things down the road. I can’t wait to get there, and I am loving the journey!

So, if you’ll indulge me, I’d like to impart a bit of… wisdom is a strong word… let me simply call it advice: never underestimate what you’re capable of, in any endeavor! There’s already plenty of folks taking care of that task for you. Your job is to kick ass, so focus on ass kicking and damn the torpedoes!

Hit the books, but listen too! If you’re not finding the right notes in that progression your favorite player is shredding, by all means, go to the video tape… or app, whatever.

If you can’t seem to figure out the timing of the tab you’re learning, make sure you have a copy of it to listen to so you can fit the pieces together and make it work!

There are many paths to the same destination. The wise traveler takes them all, one at a time.