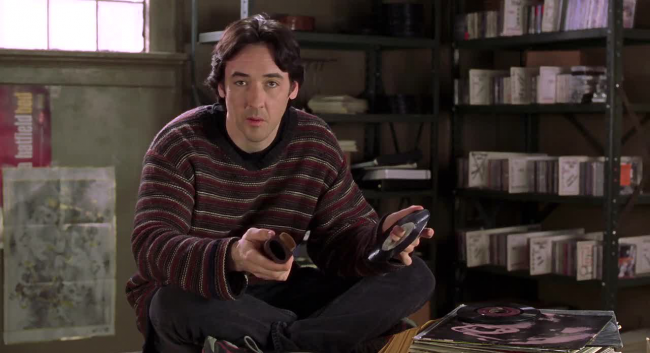 I was absent last week because bicycle. Now I’m not absent. Thank you for your indulgence and junk.

My topic this week is the lowly Top Five list.

Don’t be fooled, dear readers. The lists of which I speak are the snobbiest of snob snobbery, the “bend you over and spank ya ass cuz yo mama didn’t learn ya nuthin’ ‘bout nuthin’ ‘bout rock ‘n’ roll and she dress you funny anyhow and you so stoopit ‘bout music, she had ta stuff yo pockets with pork chops to git the dogs to play with ya, so sit there and shut up ‘cuz we about to take yo narrow ass to school” variety of list.

Now, I don’t know how many of all y’all compile them, but myself and my most excellent friends, especially the illustrious Michael Nordberg, who also holds the distinction of the single most musical person I have ever known, are obsessive about them.

Inspired partially by the film “High Fidelity,” the similarities between the film’s music snob characters and ourselves not being lost upon us, nor anyone who has ever met us and heard us opine ad infinitum about our personal analysis of every single note we’ve ever heard, we’d always made some sort of “favorites” lists amongst our friends for years in one fashion or another, so seeing the movie just solidified the format – Top Five.

Now, don’t misunderstand; it’s not as simple as, “What are your five favorite songs?” Oh no, no no. Never underestimate a music snob’s propensity for the pedantic.

For example, could you list for me, in ascending order from least to most favorite, your Top Five best disco B-sides from 1978 to 1981? Perhaps the Top Five best songs to play while having sex in a car? Top Five songs that represent, yet do not mention, the summer? Top Five songs whose title is an unconventional girl’s name, but is not “My Sharona?”

In all seriousness, however, these are just a few of unlimited possibilities for Top Five listing format parameters. They can be based wholly on subjective, personal preferences, as well as a basis in science, such as Top Five songs featuring tones inaudible to human ears.

Anything, and I mean anything goes. The more obscure or convoluted, the better.

Lists can be based on associations, as well. Weather, date of release, currently out of print, format availability (i.e. cassette, 8-track, LP, EP, CD, soundtrack, single only, B-side, only available in [insert random country here], available domestically, but only on imported CD with Japanese text in the liner notes and only via airmail with a signed check and SASE)… the possibilities are truly unlimited, as is the joy and satisfaction of compiling a damn good list.

When you’re playing Top Five with someone whose musical tastes you respect and admire, issuing a list that elicits an “Oooo! Good one!” or an “Aw, man! I shoulda thought of that one!” can be as satisfying a victory as any Olympic medal (or, at the very least, a really good bowel movement).

There’s also the joyful anticipation. Waiting for your comrade to compile his list (a task which can literally take hours, dependent on the complexity ascribed to the list), a skilled Top Fiver can draw out the delivery of those five answers and prolong the anticipatory aural agitation to near fatal degree.

Well, nothing, really. It’s just one of my favorite fucking things in the world to do.

Mike took a gig in New York State a while back, so I don’t see him as often as I’d like these days, but we do, randomly, text each other a Top Five format and eagerly await the response – proof that Top Fives are so much fun that they’re worth a little extra effort.

When Mike and yours truly worked at the same music store, the sometimes month-long stretches of little-to-no foot traffic lent itself fantabulously to our list-making addiction, and we took full advantage of any opportunity to indulge, often resulting in the grave annoyance of the rare customers, due to being blatantly ignored in our all-consuming pursuit of the perfect Top Five.

I learned more about the musical tastes of the people I played Top Five with in one carefully thought-out list than a complete overview of their record collection would afford, especially if they set the parameters for the list format themselves, because creating the list question is a uniquely personal skill.

I learned a ton about music, too – things any individual’s myopic musical tastes would never lead them to discover on their own.

Top Five listing can segue into Top Five lists of music you go home and find, because the list made you privy to a formerly unknown source of auditory awesomeness. Musical as well as lay friendships and collaborations can, nay, will be strengthened by participation in Top Five listing.

And, of course, a sunny day, atop a high bluff with a friend, overlooking the forest and valley below, the sun warming your face as you inhale deeply whatever it is you’re currently inhaling there atop the high bluff with your friend, although already awesome, it can only benefit from the inclusion of a frivolously complex and pretentious Top Five list.

I truly wanted to share this utterly compelling and flat-out fun pastime with all y’all, because I’m convinced you’ll all derive as much joy from this activity as I do.

Give it a go. Whaddya got to lose? Plus, the sky’s the limit as to what you can ask! Your only limit is your own imagination. Get weird! You have my permission (not that you need my permission, but in case you need somebody to blame, should things get out of control, there’s yer out).

Hell, I’m so sure that you and your’n are gonna love Top Five listing as much as I do, or more, that I’m willing to offer a premium starter list on the house for y’all!

Top Five songs that are as satisfying to listen to as you’re going to sleep as they are while you’re getting out of bed. Any genre, but between the years 1945 and 1953 – go!

Now, if you really want to be a dick, lemme tell youse about the Top 10…