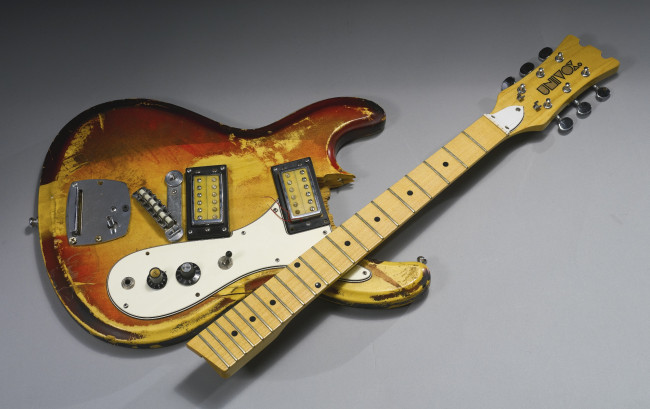 My father had many sayings, little quotes he would go to at certain times. One was, “Bret, if you don’t straighten up, we are both going to the hospital – to get my foot out of your ass.” That was one of his favorites… and one of his most feared.

My mother had a few, too. Sometimes when I wanted something I wasn’t going to get, she would say, “Well, you know what they say in Canada?”

“No mom, what do they say in Canada?”

As a young kid, I could only surmise that that phrase was used in many other countries as well. But my pre-teen mind couldn’t deny that, yes, people from the Great White North probably said such a thing quite often. So I accepted it as true.

But my father had another saying that was also commonly used. It was, “Don’t do as I do; do as I say.”

Dads are great at giving out good advice, but they aren’t always the best at following it themselves.

I am no exception.

I have a black bag that I carry to gigs. In it, I have microphones, guitar cables, stomp boxes, adapters, duct tape, etc. – pretty much anything I need to do a gig at any moment. I keep it in my car at all times next to the jumper cables.

Way down in the bottom of that bag is a microphone cable. There are other cables closer to the top that I use every gig, but down in there is one extra special emergency cable. I don’t use it that much but, every once in a while, I have to.

The problem with this cable is that it is an older style cable with connectors that you don’t see that often anymore, and it is missing a set screw. It works, but it’s not too trustworthy. I am always taping it up. I could have probably bought three mic cables for the money I have spent on duct tape to hold that cable together over the years. And, sometimes, a harp player jumps up at my microphone and grabs it and it stops working. It’s a pain in the ass. It has happened several times. I should just get rid of that damn cable, but for some reason, I keep hanging onto it. In my mind, it’s still worth something.

A few days ago, I decided I was going to find a set screw for that cable, so I dug through all the other gear I should have gotten rid of long ago and eventually found one. Cable fixed. Total time expended: 15 minutes.

Now, over time, that cable cost me time, headaches, and money. Mild annoyances, but still… and it all took about 15 minutes to fix. It would have taken even less time to get rid of it and put another in its place.

Now, I look back at my last two months of columns and I talk a lot of picking, choosing, creating space, and prioritizing what you need and don’t need to be spending your time on. But I won’t get rid of that damn cable.

I am indeed my father’s son.

So, my column this week is about broken things. Things you put off fixing or just won’t let go of for whatever reason. There are examples, like my mic cable, where just a little TLC can bring about positive change. But, whether it’s gear, songs, or people, I’m here to tell you that some things just don’t want to be fixed.

And these are the things that will nickel and dime your life away.

As far as gear, I love old stuff. My 40+ year old Fender Twin is a beast. I’ll play it for as long as it makes a sound, but some things just have to go. I had a Rickenbacker 12-string that I loved, but it wouldn’t stay in tune. After every take in the studio, I had to tune it. It took weeks off my life. Eventually, I sold it. My life is better for it. A little less jangly, but better.

I have recorded songs for people that they just wouldn’t finish. They kept reworking and adding things and spending money on an average track. They would have been better off writing one or two new tunes. Or 10.

As the slightly disgusting saying goes, “You cannot polish a turd.” But this is nothing to fret over. To quote a famous children’s book, “Everyone Poops.”

Finish the song and move on.

Broken people are the trickiest – and the most deadly.

To quote the late, great Tupac Shakur: “I gotta stop treating people like I owe them something.”

Sage advice, for sure.

I have worked with many bands that are one guy short of complete awesomeness. Oftentimes, the band hangs on to the guy just out of loyalty. The dude might not give a rat’s ass about the gig, but still they stay loyal, and it weighs everyone down. It’s a tragedy, really.

There are others out there. Go find them. Loyalty is admirable, but not if it destroys you over nothing.

Ironically, sometimes the key to victory is surrender.

So take some inventory of your surroundings and get rid of the broken things. Give up on them. The time has come to move on and make room for the new.

I will if you will. I promise.

I’ll leave you with an old IKEA commercial directed by Spike Jonze:

Here’s to the future, ladies and gents.

STRENGTH & FOCUS: I tried that… and it didn’t work!