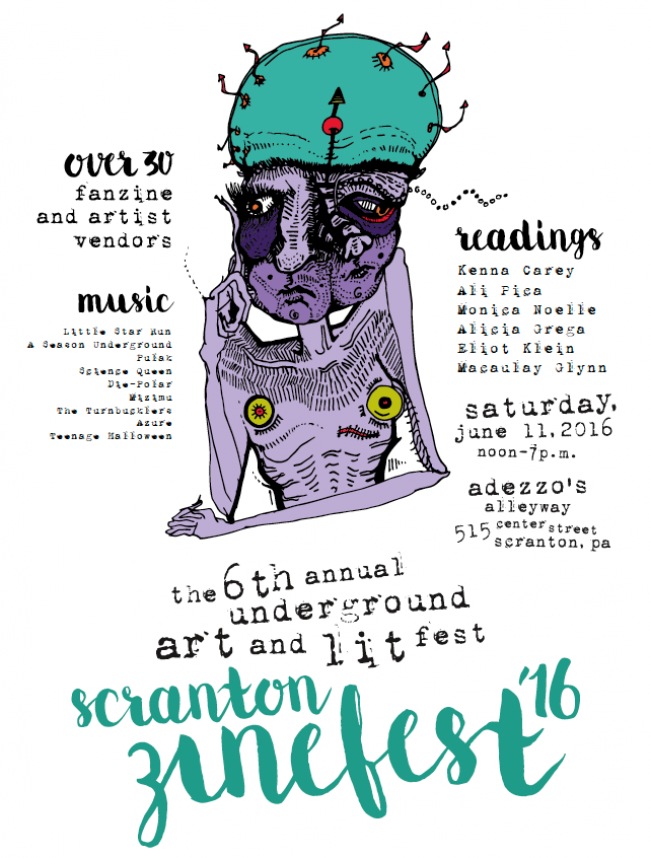 The Scranton Zine Fest is an underground arts and literature festival and celebration of groundbreaking visual artists and writers. More specifically, the festival is a gathering of zine makers, zine distros, artistic press publications, and letterpress artists, complete with live poetry readings, music performances, and food under one roof for the public to enjoy – free of charge.

The sixth annual Zine Fest, featuring over 30 vendors from several states, will be held in the alleyway of Adezzo (515 Center St., Scranton) in downtown Scranton on Saturday, June 11 from noon-7 p.m.

Zine festivals are a great place to learn something new, get inspired, discuss, interact, meet friends, connect with local writers and artists, and get involved with various forms of accessible media. The Scranton Zine Fest is an expansive festival filled with creative minds. The time and energy put into developing such a radical idea in the blooming artist-community of the Electric City showcased a groundbreaking move in light of how we converse and exchange ideas.

The initial concept for the festival stemmed from Ruthless Zine, an arts and activism publication first created in November 2008. Ruthless Zine was created in response to the lack of literary outlets for the teenage crowd in Scranton. Its content touched on local musicians and artists as well as different acts of radicalism.

During this time, a number of local independent businesses graciously welcomed the zine in their venue, promoting a sense of interdependency and community. Ruthless Zine (2008-present), along with its respective umbrella organization, Ruthless Youth (now defunct), was a predominant effort of the young adults of Scranton. Ruthless Zine provided a community platform for an exchange of open ideas. Members of the community would send in social commentary on subjects of social observation, change, and activism. Their literature would then be printed and distributed. Thus, there was a large mixture of different opinions in one zine.

Similarly, Ruthless Youth helped with community involvement by holding meetings discussing ways to change the intellectual landscape of the downtown area in order to make geared more toward a younger adult crowd instead of a “21-and-over” crowd. In accord with the zine’s objective of expressing the opinions of the locals, the members of the Scranton Zine Fest seek to bring an array of different literary publications to the city for people to enjoy in addition to inspiring those to create their own zine.

In short, the Scranton Zine Fest is an outlet and networking tool for writers to exchange a variety of interests and to celebrate another aspect of Scranton’s thriving artist base. The festival is an top-notch stop on the map of notable East Coast zine festivals in Richmond; Brooklyn; New York City; Washington, D.C.; and Philadelphia.

Now in its sixth year, the Scranton Zine Fest is working harder than ever to showcase the abundant arts and literature in Lackawanna County and beyond, striving to bring in interesting artists from all over the United States for an overall aesthetic experience.