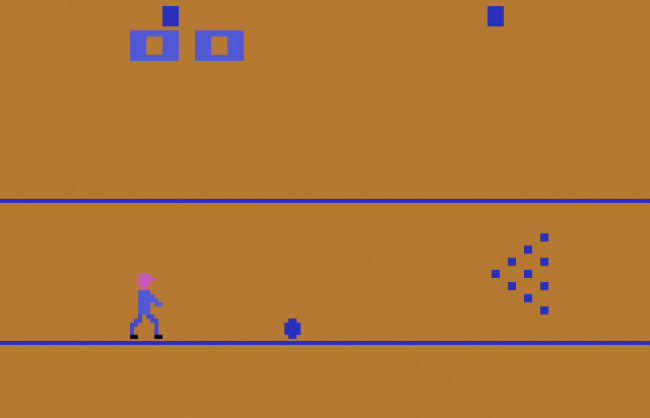 In truth, I’m not sure I can ever make it up to all of you after that month of terrible games we just saw, but I’m going to try my best. I’m not really much of a self-serving person, but May just so happens to be the month I was born. I turned 35 this past Sunday, so as is tradition for Turn to Channel 3, May is “Nick’s Favorites” month. The games showcased this month will all be titles with a special place in my heart, my childhood, and the memories surrounding them that have shaped my life as a gamer. I sincerely hope you enjoy these titles, and perhaps we have some shared memories?

Today, I begin with the game that started it all for me, the very first game I played at the tender age of just 5-years-old with my father, who passed away on April 23 of last year. It’s pretty safe to say, had my father not taken the time to show me the ins and outs of video games at that time, I probably wouldn’t be as big of a fan of them as I am. The question is, does “Bowling” for the Atari 2600 do more than elicit fond memories of nostalgia? Can one enjoy playing this title today, over 30 years from its debut?

Despite my endearment and personal attachment to this title, I can’t sugarcoat the truth – “Bowling” is an exceptionally basic title, if only in the soundtrack. “Bowling” only contains the steady roll of the bowling ball, the ball hitting the pins and, yes, two little sound bites you get as a reward for getting a spare or a strike. This was an era where substance was far more important than all the bells and whistles we’ve come to expect in today’s gaming, but in the late ‘70s and early ‘80s, you truly couldn’t have found a better sounding game than “Bowling.”

A common theme throughout this review will be the fact that “Bowling” on the Atari 2600 gave you everything you wanted and nothing you didn’t because, let’s face it, there wasn’t a whole lot to work with at the time.

You have a bowler who looks like Mr. Game and Watch, for those “Super Smash Bros.” fans reading along, the pins, and that’s truly it. I will say, and highly recommend, a hack of this game called “Cosmic Bowling,” which certainly has a bit more color and style to suit those who find ordinary “Bowling” bland and unappealing. Speaking of “Cosmic Bowling,” this didn’t exist during the peak of the Atari 2600’s success and, thus, all we had was plain old vanilla bowling (and we were grateful, too, darn kids – stay off my lawn!).

As the cliché saying goes, however, never judge a book by its cover or, in this case, a fun game just on the fact that it has little to no soundtrack and very plain graphics. What many modern gamers forget is that there was once a time when it didn’t matter how many achievements you unlocked or trophies you obtained, just that ever-elusive high score. When video games seemed to have an endless ceiling of ideas, keep in mind that many games were simply based on those activities we enjoyed throughout the year, despite how mundane they may appear in 2016. Bowling was – and still is – a fun family game, and the Atari 2600 adaptation is truly no different. I don’t say this because it is still one of my favorite stories to tell in my shop, how my father taught me the wonders of video games, but because “Bowling” is still a game that we can all enjoy in its simplistic bliss today.

Chances are you either are or know someone in your life who is the pits at bowling, but you know what? You can pop this cartridge into your Atari 2600 and none of that matters. All that matters is you, your friends, and your family are enjoying a nice game that truly hasn’t gone out of style.

I always find simple joy in seeing parents educating their kids on the games they grew up with, teaching them a better appreciation for the technology and entertainment they have now. The Atari 2600 and its library of great titles, including “Bowling,” is a terrific place to start, even if you didn’t own a console during childhood. Sometimes it isn’t about flashy graphics and orchestrated soundtracks – sometimes it’s about learning the ropes by simply pushing a button and rolling a programmed bowling ball in hopes of getting a strike.

Next time on Turn to Channel 3, we join our Heroes in a Half Shell to take a look at “Teenage Mutant Ninja Turtles II: The Arcade Game” on the NES!

Until then, don’t let this rain get you down because, hey, that gives you plenty of free time to game on!