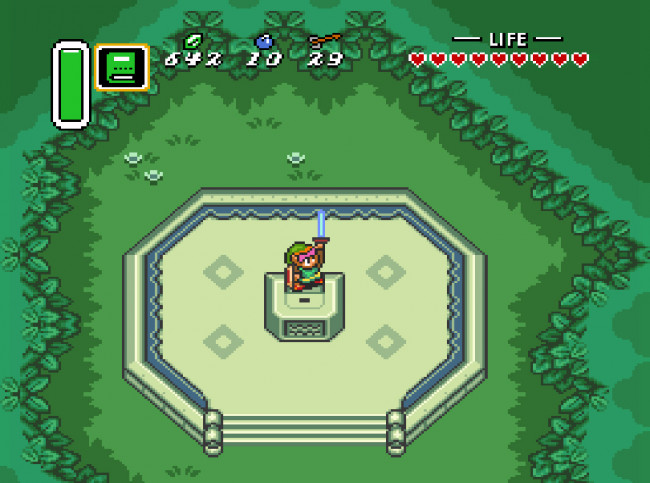 So it’s confession time here on Turn to Channel 3. Today’s topic marks the last time in the franchise’s illustrious history that I played an entry from start to finish. To many diehard fans, this is blasphemy considering what was next to come, but today we’re looking at another title that fascinated me in a way that never truly left me, and it continues to engage gamers many years later. Now let’s journey back to the land of Hyrule, Super Nintendo style, with “The Legend of Zelda: A Link to the Past!”

Oh, and if anyone feels like smashing pots or even throwing chickens during this review, feel free, just please take it outside, OK?

“The Legend of Zelda: A Link to the Past” (SNES)

Whenever someone makes a list of some of the best soundtracks on the SNES, there’s always a solid representation of tunes from this game, and for good reason. At the time, the developers and masterminds behind the “Zelda” franchise were really hitting their stride, firing on all cylinders, and the beautifully composed music to accompany your adventure through Hyrule is just one example of this.

Variety is said to be the spice of life, and this is definitely true of a lot of the Nintendo franchises over the years, as seemingly every new entry has something for every taste in video game music. “A Link to the Past” has charming village music and enlightening ethereal tunes, as well as some dark, ominous, and brooding music that gets your adrenaline pumping for the next challenge that lies ahead. “The Legend of Zelda” series has succeeded for so long for many reasons, but I’d say somewhere at the top of the list has to be the steady stream of excellent music that truly makes you feel like you’re on an epic adventure which, of course, is exactly how you should feel when guiding Link through many a perilous task!

“A Link to the Past” was certainly a leap ahead from what we had seen on his earlier outings on the NES but, that being said, the game, at times, is overlooked by younger games because it doesn’t have that masterful look and 3D charm of the N64 behemoths that often occupy the top portions of many diehard Zelda fans’ lists of the best “Zelda” games of all time.

That being said, “A Link to the Past” continues the theme of variety by combining some bright, exuberant colors with others that are darker and more menacing in contrast, and it helps facilitate the importance of Link’s many tasks. Yes, the basic concept of good vs. evil is as old as the sun in the realm of video games, but few can truly capture that feeling like the graphic artwork presented. If you don’t feel this style of graphics continues to draw gamers in, consider the fact that indie developers are finding success in the more retro-style bit graphics in this genre of gaming as an alternative to the flashy, over-the-top style that has been developed in recent years.

If anyone believes there’s not a special place in the gaming heavens for this game, consider this – this title was given a reboot of sorts with “The Legend of Zelda: A Link Between Worlds” on the 3DS in 2013, and this is because, quite frankly, I think diehard fans of this game were tired of “big brothers” “Ocarina of Time” and “Majora’s Mask” stealing all the glory.

Above all, “A Link to the Past” is a terrific game that, in many ways, is timeless. Journeying through Hyrule, as well as the alternate Dark World, collecting weapons and items, finding hidden secrets – all of it is just as fun as it was in the 1990s, and that’s saying a lot in a world where video games seem to constantly want to reinvent themselves, despite the fact that most gamers still enjoy games like these from their childhood. “A Link to the Past” is a prime example of what encouraging gamers to explore – combined with a superb soundtrack, great storyline, and tons of adventure – will get you. There’s a lot to discover in this game, and sometimes the dangers can be quite frustrating, but this has always been a game that rewards you for your hard work and dedication.

This is consistently a game that most fans of the SNES say you can’t go without in your collection for many reasons but, most of all, “A Link to the Past” harkens back to a time when simple gaming pleasures met epic adventures, and really, in a world where many times you just don’t feel like being an adult, is that such a bad thing?

I hope you enjoyed this review. We finish off the month next week with a look at a game that certainly brought many gamers to the arcades back in the day. Next time, we go back to Springfield and play “The Simpsons” arcade game!

Until then, hang tight, the unofficial start of summer is coming, but even then, after the cookout grub and cool refreshing drinks, it would be still be wise to make time to game on!