TURN TO CHANNEL 3: ‘The Simpsons’ perfectly captured the joy of the co-op arcade experience 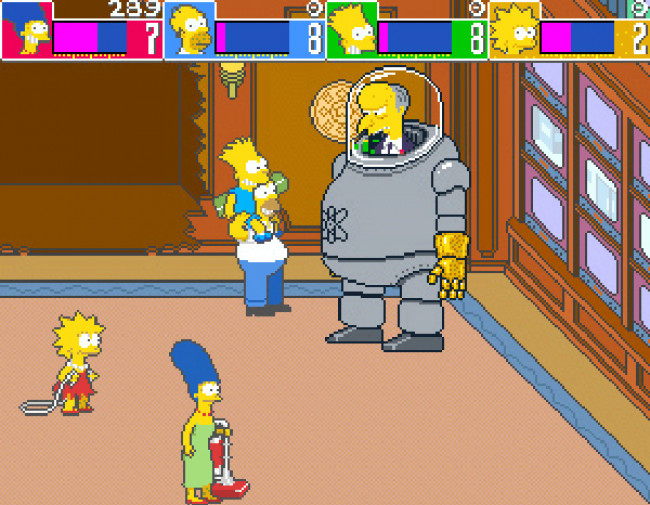 So how does one cap off a month of games that they are fond of? Well, after a lot of deliberating when coming up with the list of titles for May, I settled on more than just a game, but a memory, and one I feel I share with a lot of gamers. To this very day, many adults who grew up with what is now a billiard hall in Dickson City, Top Dog, have been wanting a resurgence on the arcade front, and while you can head to Binghamton’s fine Robot City Games for some great arcade titles (including this one, I believe), it was a lot of fun to think about those memories of Top Dog and the birthday parties I had there. There’s nothing quite like Top Dog, and there’s nothing quite like our topic for today – “The Simpsons,” one of the most notable arcade titles of its generation!

So, without further ado, let us head back to Springfield and everyone’s favorite family as they do their best to retrieve Maggie from the vile clutches of Mr. Burns and Smithers!

As will be a reoccurring theme throughout this review, it is extremely important to note that Konami, a certified expert in arcade games, especially in the ‘90s when this game reigned supreme, was behind this title. When someone thinks of Konami at this stage of the game (and the same could be said for Capcom), they think of stellar soundtracks filled with great tunes to keep you pumping quarters into the machine, and that’s spot-on with “The Simpsons.”

The soundtrack has music that both encompass the television show and some of Konami’s best work for the era. The sound effects, especially the voice acting of the main characters, are also very well done. I do wish they could have used a better touch on Smithers and Mr. Burns in spots, and the bosses have generic voices for the most part too, but I feel that the soundtrack for this game is very well-rounded.

While that distinct art style of “The Simpsons” universe is present here, I still feel like it was another fine example of taking what was there and giving that Konami touch to it. The levels are bright, colorful and, at times, seemingly taken right from the television show. Enemies are large, active, and plentiful, and I loved how aspects of the graphics can be interacted with as you play, which was probably a revolutionary concept for the time. I can imagine what the meeting must have been like when someone said, “Let them throw just about anything, even a dog or a cat!”

The cut scenes in the game are also pretty darn impressive for the time period as well, but that just shows you how Konami has a knack for taking an established license and not just treating it with kid gloves, but enhancing what’s there while still paying tribute to not totally upset the fan demographic already established.

A few years ago, I was at Redondo Beach Pier in California, where one of the most amazing things happened to me – I got to go to Fun Factory, a huge arcade that seems to have stepped out of the late ‘80s and early ‘90s with tons of great arcade games from “Pong” to “NBA Jam;” heck, it even has a Tilt-A-Whirl ride in the middle of it! Well there, in all its glory, was a “Simpsons” arcade cabinet, and just as I did in 1991, I gravitated towards it instantly – and for good reason. “The Simpsons” is still an absolute blast to play, and while it is most enjoyable playing co-op with friends (that’s right, kids, there was a time when co-op play meant saving up enough quarters to play with two or three of your friends and not getting cursed at in German by someone across the world as you look like telemarketers with your goofy headsets), I still found it a blast to play solo as well.

With a variety of weapons, characters with their own distinct strengths and weaknesses, cool bonus stages, and even a wacky dream level, “The Simpsons” did more than just play to its target demographic – it brought in gamers who could have cared less about the television show and just enjoyed a great beat ‘em up.

Is the plot corny? Well, yes, but it’s the ‘90s, man, and we were all about that fine cheddar back then!

While the PlayStation Network did have a digital release of this at one point, I’m unsure if it is still available, which is a shame because it had a lot of cool features while not making the game in HD or whatever other nonsense developers feel a classic like this needs. In the end, the best ways to play this title would be to either track down a cabinet somewhere (again, I believe Robot City in Binghamton has this, but I could be wrong) or download a MAME emulator to your computer, a whole bunch of BIOs files, and this ROM, but you’ll need a powerful computer to truly enjoy it. Either way, you owe it to yourself and your inner child to play this game again. “The Simpsons,” like many arcade favorites of days gone by, brings us back to simpler times in life.

You know, like when “Don’t have a cow, man!” or “Eat my shorts!” were a part of popular lexicon. Oh, and when someone thought “Do the Bartman” would have caught on like “Walk Like an Egyptian” or “The Electric Slide.” It didn’t, of course, but it didn’t matter to us as long as we had plenty of quarters to enjoy this fine arcade game.

Well, that does it for me this month. Next month we begin our “Summer of Games” with some titles that tie into fun in the sun and outdoor activities or, in some cases, what games some of us were playing instead of going outside!

Until then, nice weather has finally arrived, and while I’m all for a cool drink on a nice day, I’m also for making time to game on!