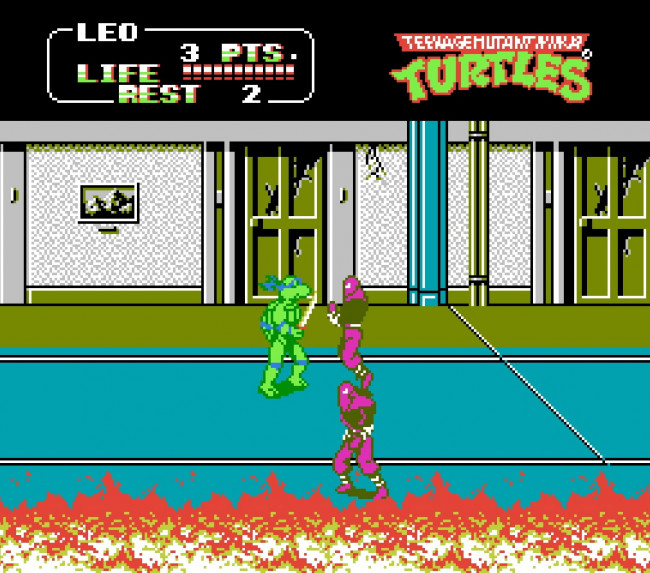 Adulthood, sadly, has a way of often crushing those lasting memories you have of days gone by unless, of course, you find a way to bury them so far back that nothing can touch it; thankfully I’ve been able to do that with a lot of my fondest gaming memories.

Today, we’re going to discuss the struggles and successes of one gaming developer that took an iconic franchise (especially for the time) and somehow managed to shoehorn as much of its arcade beginnings into an NES cartridge. Now, friends, we surf the sewers back to a time when our Heroes in a Half Shell ruled the world and kids wanted another Nintendo game showcasing how awesome they were back then. “Teenage Mutant Ninja Turtles II: The Arcade Game” on the Nintendo Entertainment System is our topic today during this month of my favorite games on Turn to Channel 3!

A game tasked with emulating an arcade game will always fall flat because, at that time, it just wasn’t technologically possible, but with that being said, “TMNT II” still comes pretty damn close to doing so. What is most important, much like in every TMNT game before it as well as those to follow, is the amount of variety in the music and sound effects. Keep in mind that games like this targeted the demographic that enjoyed the comics and cartoon show, so they had to deliver an action-packed list of tunes to grab their attention and sound effects that could stand next to what they would see and hear in the cartoons, and this game does a solid job of that.

Could some of the music have a crisper, clearer tone to it at times? Certainly, but I didn’t find any flaws totally taking away from the masterful job Konami did at bringing the sounds of the actual arcade game to the home console.

Graphically, if “TMNT II” suffers from anything, it would be the fact that it tries too hard to be its arcade brethren with technology that is limited on that front, which causes enemies to appear grainy and, most of all, suffer from a slow down or cutting issue at times, where they blur or flicker when too many of them are on screen at once. That aside, while some early levels may seem bland in the color department, overall the graphics are pretty awesome, with the Turtles looking great, enemies varying in color and attack, and bosses looking large and in charge when doing battle with our heroes.

The best aspect of these graphics is something I didn’t touch on yet, which is how “TMNT II” wasn’t just an attempt at bringing the arcade home, but also to erase what many critics felt was a subpar debut of the Heroes in a Half Shell on the NES. I think the folks at Konami accomplished the latter graphically without question.

If the fact that playing games like these are just a blast and you’re still not grateful that you can now play with more than one Turtle at a time, Konami takes one step further by adding new levels and bosses to the original arcade game format, creating Tora, a dog-like “blizzard beast” and Shogun, a robotic samurai, for two new levels, as well as extending many of the original arcade levels. Developers weren’t pulling any punches here – this was a title that had to get gamers over the bad taste left in their mouths by the first TMNT game, and it more than made up for it.

When you look at the overall canon of titles on the NES, SNES, and Sega Genesis featuring our fearless heroes, it is easy to take a title like this for granted, but “TMNT II: The Arcade Game” was a pivotal point in the history of TMNT on home consoles, as well as indication of what current technology at that point was able to do with an arcade title in the right hands.

In 2016, this is a game that so many retro gamers search for, and debates are still on as to whether this or the follow-up, “TMNT III: The Manhattan Project” is the better TMNT game on the NES console. Whichever side of that argument you’re on, you truly can’t go wrong with what Konami was doing with the TMNT license in these and the days to come during the growing success Nintendo was having in the gaming industry.

Well, that does it for me. Join me next time was we take a look at a game that enchanted so many SNES fans – “The Legend of Zelda: A Link to the Past” will be the topic of discussion next time on Turn to Channel 3!

Until then, grab some pizza with your bros and game on!