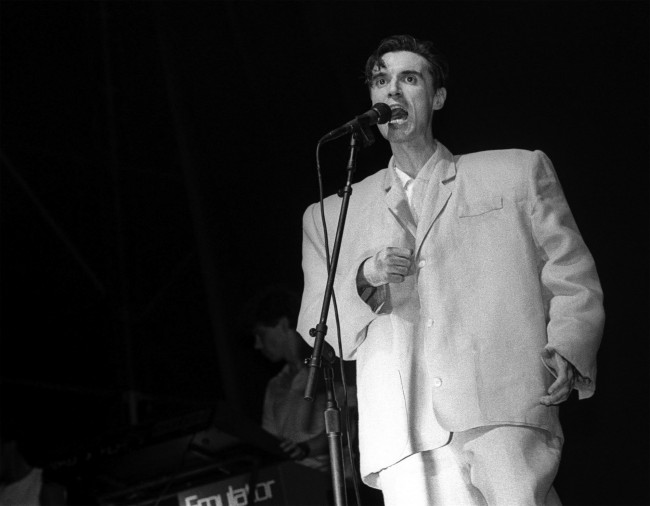 When I was a kid, I loved The Beatles. The very first song I can remember hearing was “Come Together.” I remember running around the coffee table at my grandparents’ house when my aunt Maureen, who was only 12 when I was born and thus treated me much like a little brother, would play the 45 on the big old tube amplified hi-fi console.

I loved The Beatles passionately into my tween years and to this very day, as well as the Bee Gees (both pre and post disco) and KISS, who’s “Alive II” was the very first record I ever bought for myself (The Beatles’ “Help!” was next… on 8-track). But I distinctly remember an intense dislike for both Led Zeppelin and The Doors. The former because their songs were too long – I can literally picture when, where, and to whom I actually uttered those words – and the latter because I found them overwhelmingly boring.

I found Steely Dan to be too mellow, and when I saw the Talking Heads on “Saturday Night Live” in ‘79 performing “Artists Only,” they were totally baffling to me; all I was left with was a nagging confusion as to why that guy didn’t ever blink.

Fast forward to 1981 and a camping trip with my dad. We intended to camp on the beach in New England, but the weather refused to accommodate, so we decided to go see a movie. After driving around aimlessly (something he and I both still love more than most other things one can waste a day doing), we found a theater and popped inside to watch the new hit, “Raiders of the Lost Ark.” This began a tradition of seeing Indiana Jones movies that has continued to this day, with us watching “The Kingdom of the Crystal Skull” together over the phone from separate continents. But I digress…

As we left the movies, the storm had become a full-blown hurricane. This, of course, made driving around even more fun, so we set an absolutely non-linear course back to where we assumed the campgrounds might possibly, maybe, have been.

As the lightning lit up the road ahead like an instant of noon sunlight and the rain pounded on the roof of the tiny, early ‘80s compact pickup truck (it was baby blue metal flake. Small flake…) we tuned in the radio and listened together without speaking. It was at this moment that The Doors were transformed in my consciousness from a huge drag into the most illustratively artistic rock ‘n’ roll I had heard up to that point when “Riders on the Storm” began to play.

Ray Manzarek’s bassline plodded out exactly what sitting in the cab of that truck felt like. Then his right hand played the rain… and, of course, there was thunder coming from both inside and outside of that truck. Things had gotten very vivid, very quickly.

Seven minutes and 10 seconds later, I was a different person. As we arrived to where our tent used to be, we put on the high beams and ran into the rain to chase it, along with the poles, cords, and stakes as they blew down the beach, finally catching them and laughing, soaked to the bone, as we climbed into the bed of the truck and closed the cap’s hatch against the storm.

When we woke up the next day, the sun was shining and I was a diehard Doors fan. Not to mention me and my dad had a new bond that drew us closer together than ever before. Jim Morrison, Harrison Ford, and a Nor’easter combined to make one of the best damned memories in my big, round head.

A few years later, with my greasy sideburns, Pro-Keds high-tops, and Levi’s so tight you could tell my religion, I was a burgeoning metalhead. I had already learned the joys of Alice Cooper via his “The Nightmare” TV special in ‘75. That guy makes a massive impression on a 7-year-old with a penchant for Boris Karloff and Vincent Price. You can ask my kid – he thinks Alice and Gene Simmons should rule the world… which they kinda already do.

But I had yet to grasp Zeppelin… until an accidental rendezvous with musical destiny.

Once upon a time, there were two radio shows on a now unfortunately average classic rock station, which at the time was a cutting edge AOR station that helped form my musical identity. One was called, if memory serves, “The 4 O’Clock Album Feature,” although the time could be incorrect; I seem to remember it broadcasting either very late at night or very early in the morning. It was dark when it aired, I know that much.

The other was “For Headphones Only.” I am certain about that title. I mention both only because I can’t recall which of the two the Zeppelin broadcasts that changed my ears forever aired on. However, I do recall it being well past midnight and they played the entire album, both sides, uninterrupted.

I lay on the floor of my room at the foot of my bed with my serious Koss isolation can strapped tightly to my ears. The greenish glow of my Realistic component stereo radio dial light lit only the area two feet in front of it, and I kept my head out of the light, scanning the stations (because back then there were different songs being played. FM was a relatively new thing, virtually no commercials and a chance to hear a full album in context, as opposed to the lousy cash-in single-oriented format of AM stations in the ‘50s and ‘60s… and 21st century radio in general).

An unearthly scream and a plodding, pounding, diabolically syncopated rhythm. It terrified and attracted me with the same allure of fast women and slow horses that I would experience within a few short years.

The “Immigrant Song.” I could hear strange nuances, small augmentations of the melody from verse to verse and layer upon layer of guitar, each more angry and vicious than the one beneath. I lay in the darkness, terrified. I couldn’t stop listening, but I was certain there was a malevolent presence in the room that I couldn’t hear approaching because of the headphones. I couldn’t decide which was a priority, my life or hearing the rest of this record, so I remained frozen in fear for 43 minutes and four seconds.

The next morning, I accosted everyone I knew by demanding they listen to “Zeppelin III” through headphones, and I continue to demand it to this very day.

I was older still, somewhere between 17 and 20 when Fagan and Becker carved their niche into my brain.

I had always found “Dirty Work” and “Reelin’ in the Years” pleasant enough, and “Hey Nineteen” made a mild impression the year it was released while listening to my Lloyd transistor radio one morning as I got ready for school.

Then, one day after smoking too much grass out of a makeshift bowl fashioned from an apple and some tinfoil in the basement of my best friend’s house (a friend who shall be identified only as “El Diablo” took a bite of the apple in the dark every time it was his turn in the rotation, eventually leading to a great deal of confusion, consternation, and maniacal cackling on the part of El D himself), we all piled into someone’s mom’s “borrowed” 1978 silver Chevrolet Nova (known as “The Shark”).

At this point, we began our daily “we played hooky again and nobody knows where we are so we’re taking this car and driving around in the country until our parents get home from work, at which point we will discuss out story in order to be able to properly corroborate each other’s alibi should we be interrogated” cruise.

During one of the many stoned lulls in conversation that usually began as follows – Dude 1: ”What?” … Dude 2: “What?” – it happened. The opening riff, just one note, rapidly repeated, of “Black Friday” pumped out of the genuine GM radio.

I was horribly confused. Isn’t this music for uptight grownups in turtlenecks? Why can’t I stop tapping my foot?

Then it dawned on me what those seemingly nerdly grownups and I had in common. I wondered if anyone ever ate their bowl, too. And, thus, Steely Dan finally made sense.

Finally, we come to the Talking Heads.

As I stated, they baffled me. “These people are having a collective seizure” was the only conclusion I could draw as an 11-year-old whose mom was bitchin’ enough to let him stay up late on Saturdays so he could see Mr. Bill tortured and killed by the deceptively kind-voiced Mr. Hands every week (she actually insisted I watch the premier episode four years earlier because she correctly surmised it was a historical event in the world of popular culture. People who have had “SNL” there for their entire lives unfortunately have no concept of how incredibly subversive a concept it was in 1975).

For years, the memory of that televised performance perplexed me. I was totally creeped out and turned off, but I couldn’t figure out exactly what it was that bugged me, so I would briefly obsess whenever it came to mind.

Then, in my 16th year, I had strep throat. It was near the end of the school year and unseasonably hot. I was stuck inside and not entirely upset about it, as I had zilch energy and felt like ass, so I lay in bed, that weird drifting to and fro sort of twilight sleep wafting over me every few hours.

I had my trusty nightstand radio at the ready, as always. I can even recall the station it was tuned to – WVMW 91.5, Marywood College (it wasn’t at 91.7 yet, nor was it a university).

During one of the above mentioned weird sleep states, I could hear someone really beating the hell out of what sounded like a Strat through the clean channel of an amp. They were strumming, hard, on a minor chord, and it was a strange mix of menacing and cheerful. My fever made it even more difficult to understand…

“I can’t seem to face up to the facts”… this is that guy that doesn’t blink. He has the strangest voice…

“Psycho killer, qu’est-ce que c’est”… Did he say “psycho killer?” And was that random French in an otherwise English sentence?

I shot up in bed. I get this guy. He channels his insecurities and neurosis into songs that evoke those exact emotions in the listener! Then he is purged of them and we are saddled with them! He… he’s a fucking genius!

The next week, I demanded I be driven to see “Stop Making Sense” at the Viewmont Mall. I sat through it four times on one ticket, ducking down in my seat between showings (not that any of the teenaged ushers actually gave a shit, but it made me feel dangerous).

It’s funny; I’ve never grown out of a single band, album, or genre of music.

But I keep growing into them.