Ben Kronberg is a stand-up comedian and musician from New York. He combines clever one-liners and witty observations with catchy songs that he performs while playing instruments like the guitar, Casio keyboard, and iPhone. Much of his material has been inspired by girlfriends, who are now incidentally ex-girlfriends.

Since his breakout performance at the 2007 HBO Aspen Comedy Festival, Kronberg has performed on “Last Comic Standing,” “Jimmy Kimmel Live,” “John Oliver’s New York Stand-Up Show,” “Last Call with Carson Daly,” and in his own half hour special on Comedy Central. Comedy Central also named him as one of the “Comics to Watch.”

Kronberg is the star of the popular web series “Ted & Gracie,” about a woman who is engaged to a serial killer and has no idea, and is known from films such as “Steve Coogan Hates Twitter,” “Escape from Brooklyn,” and “Vera.”

Nick Lavallee is a comedian from New Hampshire who was voted best comedian in 2010, 2011, 2014, 2015, and 2016 by Readers of New Hampshire’s Hippo Press. His latest album, “The Other Dude,” consists of musical comedy, stand-up, and accompanying videos on the DVD, and his earlier albums debuted in the Top 50 of iTunes Comedy charts.

Lavallee has appeared alongside Sally Struthers in “I Love You, Sally Struthers,” and his online content has been featured on the front pages of Funny or Die, Rooftop Comedy, and the Boston Comedy Examiner.

Lavallee has performed opening spots for such national headliners as Comedy Central’s Bo Burnham and Maine’s King of Comedy Bob Marley. In 2012, Lavallee solidified himself as a national act by appearing the Laugh Factory in Las Vegas and Hollywood upon the personal request of the club’s owner, Jamie Masada.

Russell Austin is a local comic from Jim Thorpe who loves playing dive bars and talking to drunks. He is known for his high-energy act and has played all over Northeastern, Central, and Southern Pennsylvania.

Erich Drexler is a regular at the Bethlehem Steel Stacks Improv Comedy Power Hour show. He is a very high-energy comic with solid, self-deprecating humor. He is also a regular host of The Keys’ open mic.

Elliott Elliott has been doing stand-up for many years and has hosted a ton of events in that time. His material is a mix of self-deprecating and observational humor. Elliott is a regular guest and sometimes host of the podcast “A Compelling Unknown Force, which is available on iTunes and Podbean. 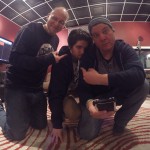