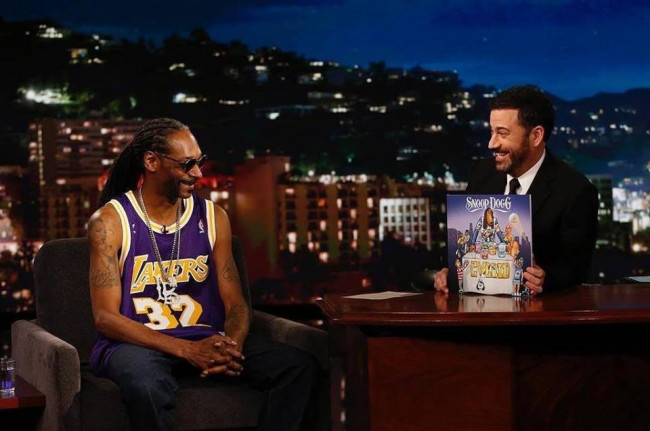 Originally from Pittsburgh, the 36-year-old local illustrator and graphic designer has collaborated with Snoop and Tha Dogg Pound before, creating the artwork for the California rapper’s “Throw Your Dubs Up” mixtape in 2011, and he has also worked with Biz Markie; DJ Jazzy Jeff; former Jay-Z labelmate and prodigy Freeway, along with Jay-Z’s tour DJ and studio engineer Young Guru; The Lady of Rage; Neil Walker of the New York Mets; Les Gold from truTV’s “Hardcore Pawn;” and Pittsburgh’s Randyland, among other clients.

After the “Coolaid” artwork debuted nationally on “Jimmy Kimmel Live” on Thursday, June 2, we caught up with Roach to get the dizzle on his striking art style, how this opportunity came about, what Snoop Dogg and Joe Cool are like to work with, and what projects he has been up to locally.

NEPA SCENE: How did you get started as an artist?

JUSTIN ROACH: Well, I’m a self-taught illustrator and designer and, really, most of my life, I’ve just been very much into the arts and drawing. I really didn’t have a computer growing up, so everything I created was all free-hand drawings and illustrations. I’ve always been very quiet about my art, but a friend of mine opened my drawing book one day and really took an interest in my work. He had a friend that owned a popular website in Philadelphia and they needed a logo for the site, and he approached me to do the work. I drew it up freehand and he loved it, but he also suggested that, going forward, I should invest in a computer and try to learn some of the digital programs to become more marketable.

So, to make a long story longer, I bought a used computer from my cousin for $150 and it had a stripped-down version of Photoshop on it. I sat for a few years and just taught myself the ins and outs of the program, along with Illustrator, and slowly learned from there.

NS: Being self-taught, how did you learn to illustrate?

JR: I think the ability to draw was always there from a young age, so it really became more about learning the programs to turn my drawings into something more clean and marketable. I’ve always, from my youngest days, been fascinated with art and, oddly enough, graffiti. I always loved the colors of graffiti when I was young, so I focused so much energy on bright colors and clean line work. Once I began to learn Illustrator and Photoshop, all these ideas and drawings started to really come to life.

NS: How would you describe your artistic style and the type of illustrations you do?

JR: I would say my style is more cartoon-ish/illustrative with a definite urban and graffiti influence to a lot of it. Most of the illustrations I do now are commission-based, so they vary depending on the clients, but a good deal of them are musicians. I’d like to think my style is fairly recognizable, for better or worse.

On a more local note, I’ve been illustrating a ton of storefronts of Scranton businesses for this great little initiative we are doing for my day job at Wayne Bank, and it’s a different look for me, but I’ve been having a blast doing them all.

NS: You’ve worked with Snoop before. How did you first get hired to work for him?

Joe and I spoke and he was a big fan of my art style, and I am a big fan of Joe’s work and was heavily influenced by his style as a teenager. Working with Joe was equally as cool for me as it was working with Snoop. Joe needed some line work and coloring done on a lot of new sketches he was doing, and he recruited me to handle the bulk of the work on a now-defunct skateboard line that Snoop was behind called DPG Skate. This lead to several other projects I did, both with Joe and some solo for Snoop. 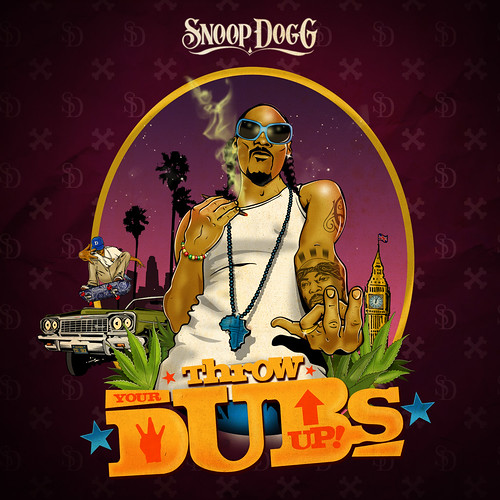 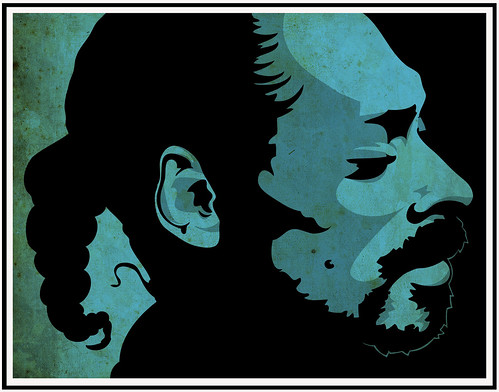 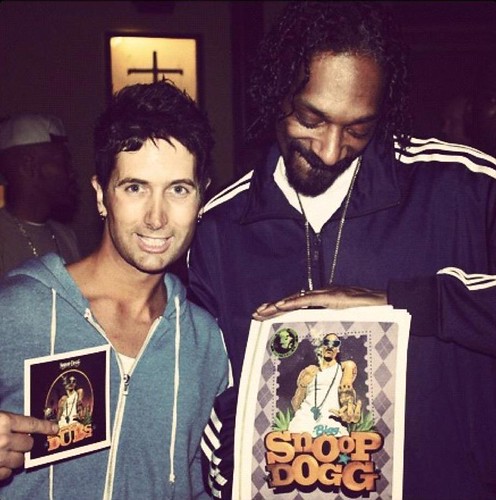 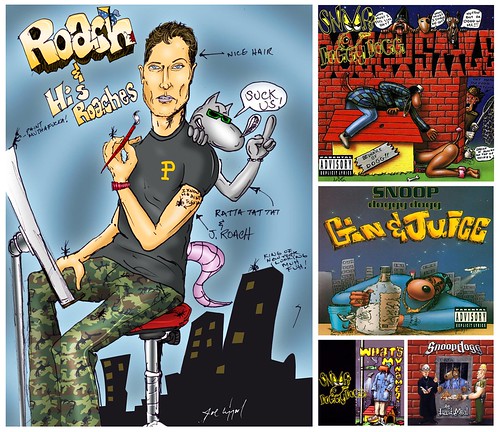 NS: What were they like to work with and eventually meet in person?

JR: Both Snoop and Joe Cool have been wonderful to work with. Snoop, for obvious reasons, is just such a well-known and universally-liked celebrity and is really one of the more popular entertainers of our time. Because he is so heavily followed on many social media accounts, working with him really boosts my exposure. Joe is always a treat to work with as well, as he is one of the funnier people I’ve ever met and always so gracious and complimentary of me.

When I met them both in person, they couldn’t have been nicer. It’s really wild to see the following that Snoop gets in public, but to be able to talk with him for a bit and have him compliment my work face to face was a total validation moment for me.

NS: How did you end up doing this new piece for him?

JR: Joe Cool and I were talking for a while here and there about reuniting on a few new pieces, and he sent me a text about two weeks ago and asked if I would jump onboard with him for the new Snoop record. This was a big album for Snoop, since it’s his first rap album in over five years and a “return to gangsta rap,” as he’s billing it. He’s working with top producers and guests for this one, so it was a no-brainer for me to get involved once the offer was extended.

NS: What went into this new album cover for you artistically?

JR: This one was pretty cut and dry. A few phone calls back and forth with Joe and Snoop’s management team and a few scans and e-mails later, we were able to knock out the cover in about a week or so. Joe sends me his drawings and sketches, and then he will call to discuss any changes as well as color schemes that he and Snoop have in mind. They are fairly open to colors, but they’ll have a few suggestions here and there that I run with. I always want as much input from Joe and Snoop as possible since it’s their vision.

NS: What was their reaction when you sent them the final product?

JR: Joe is always so appreciative and complimentary. He was a fan of the final product, and I believe Snoop’s reaction, according to Joe, was “Sick!” I did a couple variations for them to look at and they agreed on the one that was shown on “Kimmel.”

NS: What was it like seeing your work on “Jimmy Kimmel Live” the other night?

JR: That’s a feeling that never gets old. The money end of the business is nice, but as an artist, and I’m sure almost everyone out there would agree, the recognition and the positive feedback part is priceless. It’s always a really gratifying feeling to see your work on a stage that large. Sometimes I can’t believe it, and other times I know how long and hard I’ve worked at this stuff, so it’s rewarding. There’s always a certain amount of luck in the ingredients, as there is talent and dedication. I consider myself very lucky and honored.

NS: You also received a personal video message from Snoop.

JR: Oh yeah! The little personal drop from Snoop was awesome – just something to file away in my own personal portfolio when I’m having a bad day. It’s nice to read back through old e-mails or messages like that to stay motivated.

NS: Are there any projects you are working on currently?

JR: I’m currently in the process of finishing up the interior comic for the Snoop album at the moment, and once that is wrapped up, I have a few album cover projects lined up with this record label in Amsterdam that I do a lot cover work for called Elite Fleet. I’m also very possibly working locally on Pat McGlynn‘s new Blinded Passenger album if the Snoop project wraps up soon, and that will be fun because Pat’s projects are always top quality. I also just wrapped up a few pieces for the crew at Loyalty Barbershop in Scranton, and those guys are a treat to work with as well. They are top quality from top to bottom, so to work with such an aesthetically-focused group is always a blast.

NS: Is there anything else you’d like to add?

JR: I just really appreciate the support locally that has come from this. I was pleasantly surprised when I returned to Scranton after many years away at how encouraging and blooming the local arts scene has become. There’s so many people here with a ton of passion for the arts, and it’s incredible to see the growth. Many thanks to all of them for providing an outlet, and for NEPA Scene, as well. Keep up the great work. Oh, and get “Coolaid” in July!