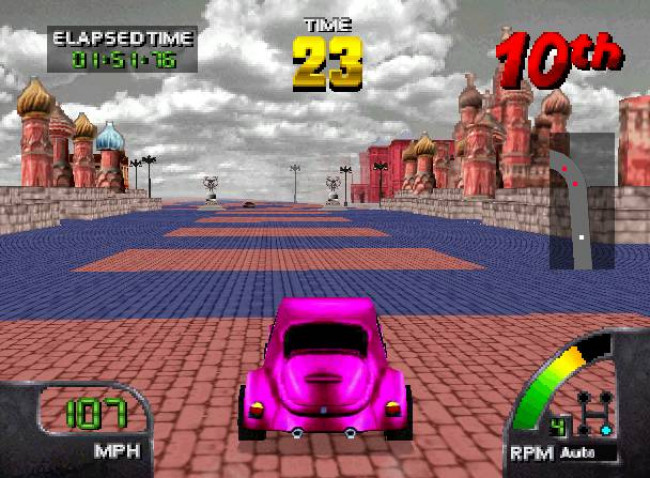 Yes, friends, arcade cabinets are still magical things. They take us back to our childhoods, eliciting memories of summer popsicles, birthday parties, and tokens upon tokens of fun. Taking nothing away from the standalone cabinets of classics like “The Simpsons,” “Teenage Mutant Ninja Turtles,” and “WWF WrestleFest,” I have a special place in my heart for the racing titles of yesteryear, if for no other reason than the all-encompassing feeling of sitting in a driver’s seat and racing against a friend (or foe, for that matter).

Today on Turn to Channel 3, we take a look at one of these titles that made its way into the home console world – “Cruis’n World” on the Nintendo 64!

What immediately hits me about this game is how delightfully annoying the title track is. It is one of my many guilty pleasures in retro gaming. I used to have it playing on seemingly constant loop in the early days of my store’s operations, and my fiancée would beg me to change the game in the N64 we had playing. The overall soundtrack of the game, while riddled with stereotypical songs developers feel you’d hear in these many global locations, is still cheeky and charming enough to be considered enduring after all these years. Whether you prefer ‘90s Euro house, generic grunge music, or what seemingly every American believed music in China sounded like in those days, there’s something here for you.

The sound effects are pretty good, with the voice tracks for “checkpoint” and others fitting in well with the squeal of tires, the burning rubber and, yes, even with stereotypical Egyptian music.

As with many games that were originally arcade hits, the Nintendo 64 port of this racer pales in comparison to the original as far as graphics are concerned. It can get strange when, as you race, buildings, trees, and other objects on the sides of the road seem to manifest out of nowhere, but the cars all look great, the tracks themselves flow quite well visually and, despite the sometimes blocky-looking visuals off the track, they are still smooth enough that you know what you’re looking at.

In an era where polygons were served by developers to gamers like a bowl of cereal on a Saturday morning, “Cruis’n World” doesn’t fall into the same traps, and that’s saying something.

Whether it’s within the driver’s seat of the arcade cabinet or at home with friends on the N64, this is still a blast to play. “Cruisn’ World” not only gives you a stellar racing experience with some great tracks, but it also allows you the opportunity to play with vehicles varying from sports cars to New York City taxi cabs to even a school bus! This adds another aspect to the replay value of the game.

While getting mixed reviews from critics at the time, I personally felt the silent delay of the game until 1998 gave developers more time to make this as good as possible, and I feel that they did their absolute best to recreate an arcade smash hit on a home console.

Smack dab in the middle of the more traditional racers of the time and still removed from titles like “Twisted Metal,” it would have been easy to have missed this one in the late ‘90s. However, it is the fact that the “Cruis’n” series carved its own niche into the racing genre that I feel helps it stand apart from the pack. Whether you prefer the original “Cruis’n USA” or “Cruis’n Exotica,” this game completes the series and definitely stands toe-to-toe with the other two quite well.

Well, that completes another month here on Turn to Channel 3. Next month, as the fireworks go off, we turn up the heat with some action-packed games, so stay tuned for that!

Fire up the grill, light that Roman candle, but don’t forget to make time to pick up your controller of choice and game on!