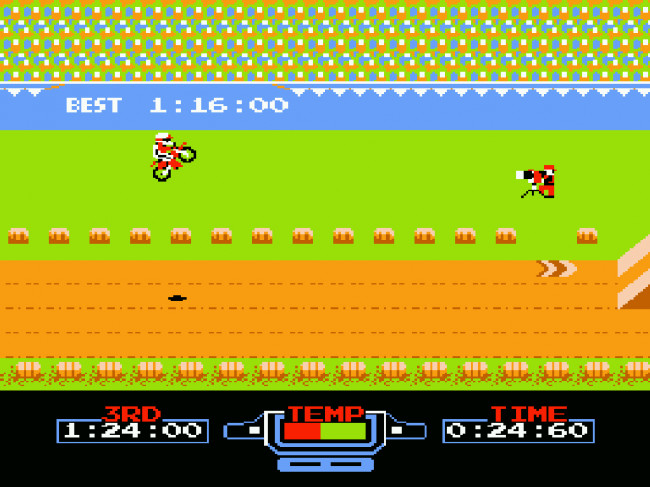 June is here and it’s finally starting to feel like it, so what’s a retro game-loving guy like myself to do? Why, look at some games that remind him of spring and summer, of course! You know, those days when he probably should have been outside but was instead enjoying some great games inside to take him away from those public school days.

Today, we play a game that is so popular, it often comes up in conversation when discussing some of the most memorable, yet perhaps lesser-known titles on the original Nintendo Entertainment System. Let’s hop on our motorbikes and ride the tracks with “Excitebike!”

While “Excitebike” doesn’t have a vast soundtrack by any means, it is a great example of how early NES titles made the most of the simplest sound bites and ditties, if you will. Yes, it has title screen music and it’s simple and goofy, but it’s also easily recognizable to anyone who grew up with it and the beloved NES console.

Obviously, the sound effects play a huge role, too, in painting the picture of racing bikes, big jumps, and even getting stuck in the mud and having your engine overheat. Again, there’s not a whole lot there, but in just a few short songs and a handful of sound effects, Nintendo was able to convey their message to the masses, and that’s pretty darn impressive.

There’s not a whole lot to look at with “Excitebike” – simple tracks with differing colors now and again, your racer along with a few others, and photographers and trophies pretty much make up what you’re viewing as you play. These are very small sprites on these huge (in comparison) tracks that just reaffirm the technological advances for the time. An Atari 2600 couldn’t pull something like this off, which is yet another reason why the NES was the right choice to bring the video game industry out of the tar pits.

Nintendo made a name for itself early on by creating games that maybe didn’t have a ton of depth to them, and most weren’t the flashiest-looking games either, but they had enough substance to differentiate them from the pack. Like any other game in the NES library, “Excitebike” has a style and flair all its own, and that plays a huge role in how much gamers remember it.

I can still recall renting this game from the former Montage Video at the Keyser Oak Plaza in Scranton and having an absolute blast with it as my brother and I sat by a bunch of box fans to keep cool on summer days. Yes, “Excitebike” is still such a blast to play with friends or solo, but what is often overlooked is the game’s ability to let you, yes you, create tracks of your own! Were there any games in the U.S. in 1985 that allowed you to do something like this? I certainly don’t recall any, adding another layer to the appreciation gamers still have for this title. It was ahead of its time in that aspect, and you can’t argue greatness when a game tells you, “Oh yeah, and I have this, too!”

With a reasonable asking price, replay value galore, and a design mode to create your ultimate “Excitebike” track, it is truly a no-brainer when deciding if this belongs in any serious NES collector’s private stash. Times may change, but games like “Excitebike” are still delighting gamers who grew up with it, as well as bringing in new fans who weren’t around to experience its first go around the track. Pick this one up if you have the opportunity.

Well, that begins our month here on Turn to Channel 3. I hope you enjoyed our look back at “Excitebike.” Next time, we remain here in the realm of the NES console and take a look at “California Games,” one of the more unique multiplayer games on the console.

Until then, go out, enjoy the sun, put on some sunscreen (a song during my high school graduation days told me of its importance), but always find time to game on!