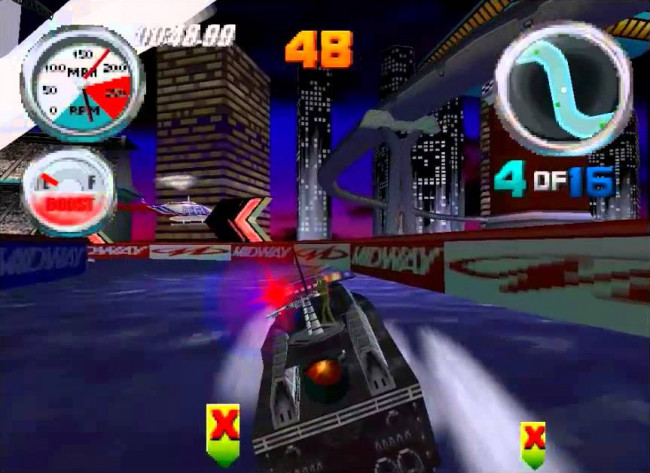 Well, it’s officially summer as I write this fine article to you, the loyal fans of Turn to Channel 3, and when I think of a great game that exemplifies summer fun in all its pixels, today’s topic is a fine example.

On tap today, we have “Hydro Thunder” for the Nintendo 64, a game that entranced so many arcade goers at the time of its debut, they were unsure that such a success could be duplicated on the home console market. Did “Hydro Thunder” succeed yet again, and how does it hold up all these years later? Well, let’s hit the waters and find out!

“Hydro Thunder” possesses quite possibly one of the most epic and yet underrated soundtracks on the N64, and here’s why. While the grand, almost movie soundtrack-style music really gets your adrenaline pumping as you ride those waves to glory, a lot of it sounds alike, relying on a heavy dose of percussion, which isn’t a bad thing, but the repetitive nature of some of the tunes can be noticeable in some aspects. That aside, I still felt that, despite a heavy reliance of percussion, the soundtrack has music that encompasses all the great levels you make your way through, as well as some solid title and menu music to boot.

While the announcer may be grating for some and the sound effects perhaps not as grandiose as one would hope for a game like this, it’s still a great game that was very well composed for the time.

Yes, like many games on the N64 at the time, jagged polygons would again rear their ugly heads, but nowhere near as glaringly as many other games of the time period. As technology in arcade games advanced, the difficulty in converting these titles to home consoles increased drastically, so “Hydro Thunder” does suffer from this like many others. However, I still found many of the levels absolutely breathtaking, with huge jumps that were both beautiful to look at as well as giving me that same feeling you’d get on a roller coaster or even on a steep hill in a car.

Admittedly, later levels seemed to lack the detail and overall artistry of others, but I still felt the roster of levels in this game were all pretty good. The boats themselves, which I’ll get more into when discussing gameplay, were also extremely well done, especially on the menu and loading screens.

Like many Midway titles, “Hydro Thunder” is chock full of replay value. Levels and boats can be unlocked as bonuses, and they range from castles and official Hydro Thunder speedways to fishing boats and tiny replicas of the Titanic, so the tried and true tradition of “NBA Jam”-style secrets in games continues here. While I found the idea of flipping boats while going fast boring in comparison to giving you a weapon to sink or even slow down the boats, the races were all very exciting, and I’ve always enjoyed racing games with checkpoints. “Hydro Thunder” allows you to use boosts when they are obtained, and each boat you choose has their advantages and disadvantages, which add an element of strategy as to which boat is best on each level.

Sometimes, I feel like the years of having your favorite fighter, team, or in this case boat to somehow usurp an arcade-style dominance are long gone, and they need to come back. “Hydro Thunder,” like Pepperidge Farm, clearly remembers.

“Hydro Thunder Hurricane,” the sequel to the original, was released on the Xbox 360 in 2010, and that was the last time we could zip around the open waters on some sweet rocket boats. That’s a real shame, because in an industry hell bent on beating us over the head with some super serious plots and lifelike characters, “Hydro Thunder” represents a time where simple gaming bliss with friends wasn’t expected, it was almost required for developers. We live in a gaming world where headsets and online play are seemingly all that matters; Hydro Thunder reminds us that nothing truly replaces loading up on caffeine (or alcohol, I’m not judging), snacks, and fun times with friends, face to face.

Well, that does it for me. Join me next time as we finish another month of great games with one last N64 title in June, “Cruis’n World!”

Until then, keep that grill going, get a tall glass of iced tea ready, and keep a classic game handy to game on!