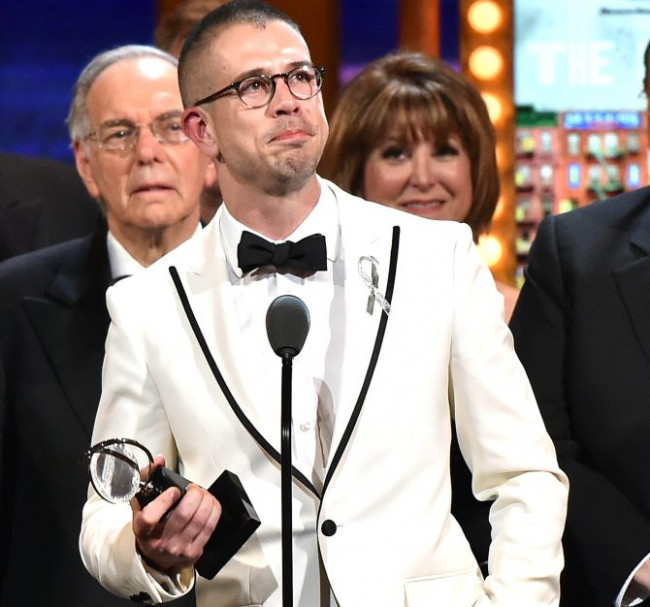 Playwright Stephen Karam, who called Scranton home for many years until he moved to Manhattan to pursue his dreams, was living those dreams last night as he accepted the Tony Award for “Best Play” for “The Humans.”

The family drama he penned, which already earned the Obie Award for Playwriting, Drama Critics Circle Award, Outer Critics Circle Award, Drama League Award, and was a finalist for the 2016 Pulitzer Prize, was nominated for six Tonys that night and won four, including “Best Performance by an Actor in a Featured Role in a Play,” “Best Performance by an Actress in a Featured Role in a Play,” and “Best Scenic Design of a Play.”

Broadcast live from the Beacon Theatre in New York, Karam thanked “all of Northeastern Pennsylvania” in his quick speech that evening and told anyone struggling with a dayjob “in order to make work that comes from your heart and your gut” to “keep the faith:”

“The Humans,” described below, premiered in 2014 at the American Theater Company in Chicago before opening off-Broadway last year. It made the jump to Broadway on Feb. 18 this year at the Helen Hayes Theatre, where it continued to receive rave reviews:

Breaking with tradition, Erik Blake has brought his Pennsylvania family to celebrate Thanksgiving at his daughter’s apartment in lower Manhattan. Unfolding over a single scene, this “delirious tragicomedy” (Chicago Sun-Times) by acclaimed young playwright Stephen Karam “infuses the traditional kitchen-sink family drama with qualities of horror in his portentous and penetrating work of psychological unease” (Variety), creating an indelible family portrait.

He spoke at the University of Scranton in 2012, saying, “No matter how long I live in New York, Scranton will always be home.” Watch the full interview below: