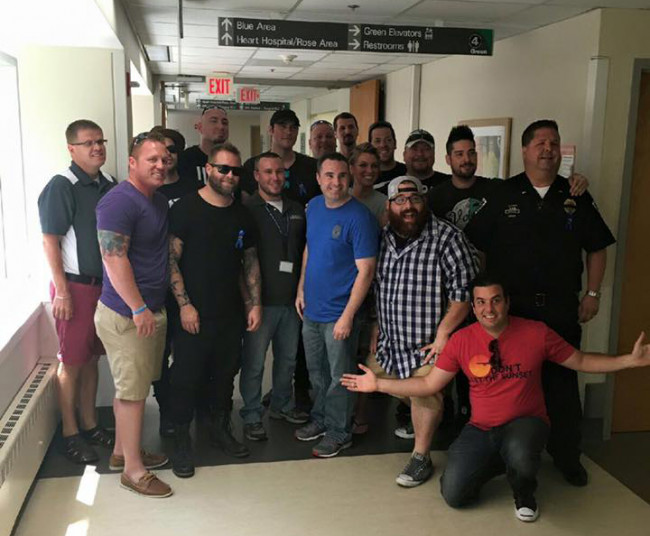 With all the recent violence going on across the country, small acts of kindness can go a long way to lift people’s spirits.

On July 8, 31-year-old St. Louis, Missouri Police Officer Michael Flamion was making a routine traffic stop when he was shot in the neck from behind while returning to his patrol vehicle for a records check, according to CBS News. He remains in stable but critical condition, paralyzed from the neck down and requiring long-term medical care that will affect him and his loved ones for the rest of their lives.

Suspect Antonio Taylor, who was on probation for a weapons violation, was later arrested after fleeing the scene. He was charged with first-degree assault of a law enforcement officer, armed criminal action, and unlawful possession of a weapon, according to the St. Louis Post-Dispatch.

Flamion served as an officer for nine years and was praised by the Ballwin Police Department for his hard work and friendly attitude.

“Officer Flamion is highly regarded by everyone in the department. His sense of humor and professional demeanor make him a centerpiece of our department. Mike is an outstanding officer whom the citizens of Ballwin should be proud to call their own,” the department wrote on its Facebook page.

“Officer Flamion has committed himself to keeping the communities he has served safe during his time in law enforcement. In return, the community has shown Officer Flamion, his family, and the entire Ballwin Police family an amazing amount of support and compassion. We are overwhelmed by the communities’ response and we thank you from the bottom of our collective heart. Our heartfelt thoughts are with Officer Flamion and his family during this difficult time. As we continue to provide professional service to the community, we ask for your continued support.”

While touring through St. Louis on July 17, Wilkes-Barre rock band Breaking Benjamin showed their support by visiting Flamion in the hospital after a local radio station told them about the situation.

Flamion is a big fan of their music, so the band played three songs for the officer in his hospital room, gave him a signed guitar and merchandise, and “spent quality time with him to let him know just how much his life matters and how wonderful he is,” according to tour manager John Phillips.

“This was probably one of the more intense things I have seen to this date since I have been a tour manager,” Phillips said on Facebook. “This nonsense has to stop. Last I knew, we were all human.”

Guitarist Jasen Rauch later wore a ribbon in tribute to Flamion and posted a message showing his strong support for police officers and members of the military on Instagram:

I'm honored to wear this pin tonight for Officer Mike out of the St. Louis area who was shot on the 9th while on duty. My heart also goes out to all the officers becoming victims of senseless acts of violence in the last few months. It's hard to even watch the news anymore. What they do takes such sacrifice and for such little reward and recognition. I'm a strong supporter of not only our soldiers, but our first responders and men in blue. If you feel this is me taking a political stance, then unfollow me. If you don't support our police, unfollow me.

“St. Louis, we love you so much and we stand with our brothers in blue!” the band wrote on their Facebook page, dedicating a song to him and law enforcement during their concert at the Hollywood Casino Amphitheatre in St. Louis last night.

Breaking Benjamin, whose 2009 album “Dear Agony” was certified platinum just a few days ago, will co-headline a hometown show with Disturbed at The Pavilion at Montage Mountain in Scranton with Alter Bridge and Saint Asonia on Friday, July 29.

Then they’ll will join fellow Northeastern Pennsylvania natives Motionless In White on the road in September on the “Nocturnal Underground Tour” with Korn and Silver Snakes. See the full list of tour dates here.