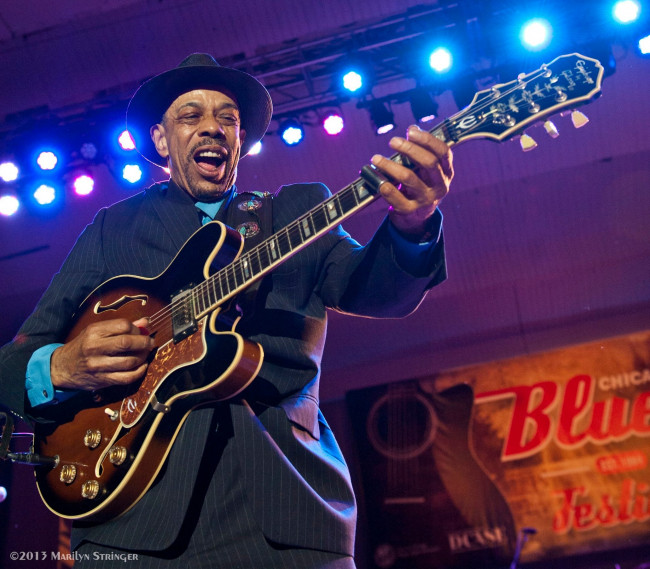 The Briggs Farm Blues Festival returns for its 19th year to its namesake farm in Nescopeck on Friday, July 8, through Sunday, July 10.

The Briggs family will yet again turn their 250-year-old farm in the rolling hills of Pennsylvania (88 Old Berwick Hwy., Nescopeck) into one of the most revered and awarded Blues Festival in the nation. Over a staggering three days and three nights of music, the Briggs Farm Blues Festival is continuing its mission of providing Northeastern Pennsylvania with an exemplary weekend of blues music that draws an audience from all over the country and parts of the world. This year features 23 international, national, and regional acts on three stages for the largest and most diverse lineup ever, featuring three 2016 Blues Music Award-winning artists.

Since its first year in 1998, “Briggs Fest” has been consistently captivating and attracting larger audiences with bigger and better acts each passing year. 2016 has the festival expanding exponentially with the addition of several key features. Thursday Night Early Arrival Camping allows the weekend to start a little early for the immense gathering of fanatical campers, who in previous years would queue up the night before regardless. Included in the Early Arrival Camping is the new Camping Stage, featuring a special night of music only for Thursday night campers.

Additionally, 2016 welcomes the first Sunday Gospel Blues show on Briggs Farm, extending the weekend yet another day, allowing our patrons a chance to enjoy Sunday afternoon to the fullest with an exceptional mix of soulful and passionate artists hand selected that perfectly embody the essence of Gospel blues. Headlining is Alexis P. Suter and the Ministers of Sound, who is perfect for the farm with her powerful and emotional stage presence and a voice to match. Victor Wainwright and the WildRoots will be doing a special gospel set that will showcase the exceptional talent of the entire band, along with Vanessa Collier, a up-and-coming talented national act with a smooth voice and amazing saxophone skills that make her the whole package. During the show, they will be recording their second album on the Briggs Farm Record Label with Alexis P. Suter and the Ministers of Sound. A longtime Briggs Fest performer and one of the crowd’s all-time favorites, Suter brings mass appeal to the label.

Among the multitude of talent that will grace the farm’s stages in 2016 will be three 2016 Blues Music Award-winning artists: John Primer, who won for “Traditional Blues Male Artist;” Cedric Burnside, who won two awards for both “Traditional Blues Album” and “Instrumentalist: Percussion;” and Victor Wainwright, who won the B.B. King Entertainer Award as well as “Best Band” with the WildRoots, which follows up his 2013 and 2014 BMA wins for Piano Player of the Year.

Saturday Night Main Stage performances include headliner Devon Allman, whose legendary family had a huge impact on blues and rock music, a tradition he carries on today with his fantastic live performances full of grit and passion; Carolyn Wonderland, a Texan with her own style as a singer/songwriter who is original and full of energy, featuring immense guitar chops and a soulful voice; four-time BMA award winner Victor Wainwright and the WildRoots, playing a blend of blues, honky-tonk and boogie-woogie with an intensity that is hard to match; and Anthony “Big A” Sherrod and the Cornlickers, who will play some Mississippi Delta Blues with “Big A’s” own personal twist that is wild and fierce.

The Back Porch Stage is a place where some regional talent is on display; a variety of great musicians from all over the area are able to showcase their stuff in a relaxed atmosphere that is intimate and inviting. Among the artists on the Back Porch Stage are J.P. Biondo (from Scranton’s own Cabinet) and Roy Williams; Miner Blues (Scranton) with Bret Alexander, Ed Randazzo, and Tony Halchak; Jimmy “Duck Holmes (Mississippi), who was the first artist on the Briggs Farm Record Label; Clarence Spady (Scranton); The Marcus King Band (South Carolina); Anthony Sherrod (Mississippi); The Michael Packer Blues Band (New York City); The Mighty Susquehannas (Bloomsburg); Dustin Douglas & The Electric Gentlemen (Scranton); Anthony Gallucio and The Retreads (Wilmington, Delaware); and Lonnie Shields’ Back Porch Party, featuring Jesse Loewy, Ben Singleton, and Leroy Hawkes (Philadelphia).

Authentic Mississippi Delta food cooked up by their own resident pit-master and musician Lonnie Shields is a highlight of the festival. Slow smoked pulled pork, mac ‘n’ cheese with stewed tomatoes, smoked chicken wings, fried catfish, coleslaw, and collard greens are some of the soul food Shields cooks for guests throughout the weekend. This is the best BBQ this far from the Delta itself. While enjoying some BBQ, audiences can grab a cob of fire-roasted sweet corn that’s field fresh and amazingly delicious.

Briggs Farm Blues Festival is a unique experience. If you talk to anyone who has been to a Briggs Fest, chances are they have not missed a year since their first experience. This is due to a huge enthusiastic fan base that spreads the word to friends and family, the amazing quality of music featured, and the tireless efforts of everyone involved to make sure patrons have the best weekend of their summer. From their first step through the gates until the time they leave, Briggs Farm has everything any festival-goer looks for in beautiful Nescopeck. It’s the farm’s mission to provide people a great environment and great friends, making their stay at Briggs Farm memorable.