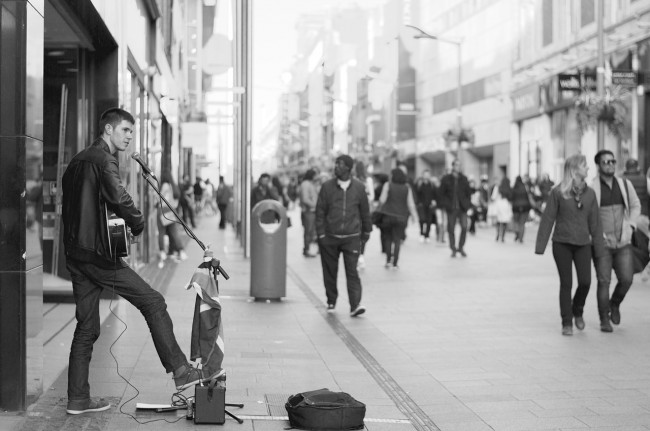 Not for nothing, but “battles of the bands,” “best of” polls, etc. are not my idea of how to build a healthy, cooperative arts community, in my humble opinion.

I’ll speak only for musicians, since I’m of that particular ilk, but I believe this applies to all of those involved in all the arts.

Pitting original music acts against one another to slug it out in order to occupy some arbitrarily created “top spot” is creating rivalry where there could be symbiosis and manufacturing artificially induced acrimony between kindred spirits. This seems counter-intuitive to the stated goals of the organizers of the events. Stated goals including the promise of better venues, more opportunities to perform, and decent pay for playing the music created out of the ether by the sweat of the brow (proverbial or literal) of each songwriter and performer.

The idea of original showcases can be, on the surface, very appealing. But when the acts get no monetary compensation while the venues the events are held in (sometimes several venues across an entire town) rake in tons of ducats from booze sales, cover charges, and the free publicity generated by the buzz surrounding what is touted as an “opportunity to hear new, original music,” there be scumbaggery afoot. There be exploitation most foul.

Why, if the event exists entirely on the predicate that original music should be promoted, are the only people not sharing in the lucre the actual original music artists?

“Dude, we’re paying you in exposure, yo!” Ah, please, douchenozzle, spare me. There’s this new fad called the interwebs, and anyone smart enough to spell can expose themselves to the entire universe. I know – I have exposed myself countless times. So don’t break your arm patting yourself on the back for your altruistic endeavors just fucking yet, Sparky.

You go back to the same crappy gin mill a week later, begging for a gig, and since the flutter around the previous event has died down and “nobody wants to pay to hear that shit,” you can’t even get arrested.

And so, slowly but surely, all of the contributing artists either pack it in or pack up and move, leaving the venues who are brave and wise enough to support local music with nobody to hire and, in turn, they have to revert to your basic live jukebox cover bands who have nothing to offer the world but slightly less good versions of songs that mean nothing to them at all, since someone else wrote them. This also, in turn, leaves the fans of original music with absolute bupkis, nothing to hear, noplace. Welcome back, milquetoast status quo. Fuckin’ Zzzzzzzzzz….

Do you actually want to help promote the local original music scene? Stop hiring shitty cover bands for one weekend or even a random Thursday once a month and offer whatever original band you hire for that slot a reasonable sum. Enough to pay for gas and a meal is more than adequate to most of us.

Quit creating arbitrary competitions within the community, especially in this grossly nepotistic area (they should spell it NEPAtistic, heyna?), where if your uncle owns the venue, your crappy Dave Matthews tribute band wins every time because they toss the actual ballots in the shitter and nobody’s the wiser. The public will organically decide A.) whom each individual considers his/her favorite and B.) which bands are so bad that nobody will go see them a second time. Usually after three gigs, they know enough to go back to the garage and get practicing.

All of this is a tactic used in this area since anthracite was king. By pitting similar social groups against one another by inserting rumor or creating a hierarchy that is pure construct, without any basis in reality, the profiteering mine owners were able to stave off unionization and continue to exploit children, immigrants, the illiterate, etc. until John Mitchell finally figured them out and brought the truth to the people. (That’s his statue on the square in downtown Scranton with his hand extended in friendship, for those of you who need schoolin’. And baby, I’m not foolin’… but I digress.)

Pitting artists against one another in the ring and making a dogfight out of what would organically be either a cooperative, fraternal, or a healthy, creatively competitive subculture is a great trick performed by the folks in charge to keep the minority that are the artists in a position of subservience, perpetuating a “Well, we have to do it for free, or we can’t do it at all” mentality that discourages anyone in their right mind from pursuing an artistic career, at least in their hometown.

Look, I don’t want to come off like a dick, but first the major labels stole the musicians’ music, then their royalties. Next, Napster et al gave ripping us off a go. The Internet makes selling hardcopy music nearly impossible to all but the fetish collector, and all club owners are in a unique position to create history!

By offering even the paltriest of payments, a club owner can get a musician to his next gig! By hiring original bands for a guarantee of the door, they can coax the band to give them scads of free promotion, because more asses in seats translates to more Gee Dubs in the old wallet. Maybe a free burger or a few beers (a perk to playing music for a living which, due in no small part to my personal abuse of, I feel is on the wane).

This can, in turn, facilitate a revolution in original music! Much like Seattle in the 1990s, we could become a safe haven for the exceptional artists of the country. Imagine what going down in history as the joint that launched the career of the next Soundgarden would do for your longterm bottom line, eh?

I am by no means suggesting that a business owner shoot himself in the foot for the sake of art. That’s, well, stupid. Rather, may I suggest an attempt to reach a symbiotic compromise that might, in the long run, be lucrative for everyone involved?

If a bar has an “original review” night, even every other month, it will give people an opportunity to see what’s out there and choose whomever tickles their respective fancies. Conversely, if a venue is the first to allow a band that becomes profitable to play, there will be (in most cases, as some people are just dicks) a sense of either obligation or loyalty that will keep the band playing there until it outgrows the room, and they will leave the room with a reputation as a place where the best and brightest of the music scene can see and be seen. I know this from personal experience, and long after the demise of the band I was in did our part, the venue is still reaping the benefits of being a place where original music can be discovered.

Seems to me that’s worth a burger or four, right?

And the bands are not beyond reproach! Demanding exorbitant sums to perform when nobody but your mom ever comes out to see you play is horseshit, and I don’t blame any club owner from introducing you to a size 10 boot in the ass if you suggest it. If you suggest it again elsewhere, I may join in because you are the reason club owners don’t want to take a chance on anyone, preventing the people who actually give a shit about their music from getting a chance to shine, so check your bullshit. ‘Cuz there’s always somebody better, just waiting for a chance to take your place.

This is, of course, a totally selfish point of view, as I am currently in negotiations with my total lack of drive to rejoin the original music community and I’ll probably need a gig, but I am not blind to the overall benefits to the bar society on the whole if we all give each other the mutual respect we deserve and build a community together!

Look, I would play my songs for free every night of the week, but not if somebody else is reaping the benefits while I put in the work. I think we can all help each other out.

And remember, if you let the powers that be choose the soundtrack of your life, some day all your memories will be set to Nickelback’s “Rockstar” or some shit.

Are you really prepared to live with that?