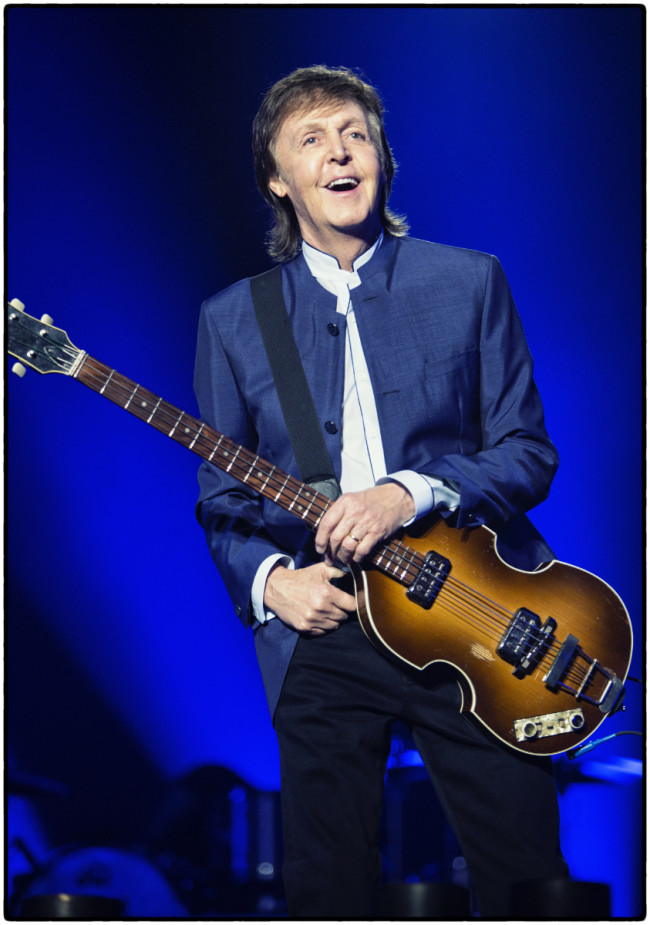 Since returning to the concert stage in 1989, Paul McCartney has treated concertgoers to a healthy mix of his Beatles, Wings, and solo classics. With his current “One on One” tour, the two-time Rock and Roll Hall of Famer is digging even deeper into those stellar catalogs.

McCartney, still looking Fab at the age of 74, has written or co-written some of the most enduring songs of the rock era. On Tuesday, July 12, he played a whopping 39 of them for a near-capacity crowd at Philadelphia’s Citizens Bank Park.

Storming out of the gate with that famous opening chord from “A Hard Day’s Night,” a tune originally sung by his former songwriting partner John Lennon that McCartney hadn’t performed live since 1965 prior to this tour, Sir Paul then played “Save Us” from his most recent album, 2013’s “New.”

“Hello, Philadelphia!” he said following the second tune. “We’ve got some old songs, some new songs, and some in-between songs.”

Then it was on to “Temporary Secretary,” an electro-pop nugget from 1980’s “McCartney II” that even the most hardcore fans thought they would never hear live, and the underrated “Let Me Roll It” from 1973’s “Band on the Run” album.

McCartney went back to the Beatles’ catalog for 1970’s “I’ve Got a Feeling,” originally a duet with Lennon, and then to his recent solo material with “My Valentine,” a 2011 song written for third wife, Nancy.

Following the Wings’ standout “Nineteen Hundred and Eighty-Five” and the Beatles’ classic “Here, There and Everywhere,” McCartney took to the piano for a riveting version of “Maybe I’m Amazed,” the 1970 solo tune written for first wife, Linda.

McCartney even went back to his days in The Quarrymen for a version of the first song the embryonic Beatles ever recorded, “In Spite of All the Danger,” and sang the “John song” “For the Benefit of Mr. Kite” from 1967’s “Sgt. Pepper’s Lonely Hearts Club Band.”

He paid touching tribute to the two deceased Beatles – first to Lennon with the conversational “Here Today” from 1982’s “Tug of War” and then to George Harrison with a ukulele version of “Something,” a No. 1 hit and Harrison’s contribution to the band’s final recording, “Abbey Road.”

Wings was represented by the big hits “Band on the Run” and “Live and Let Die” (complete with a spectacular pyro show) and the 1972 single “Hi, Hi, Hi” during the encore.

As for new material, McCartney played two more from the “New” album – “Queenie Eye” and the title track – and “FourFiveSeconds,” his 2015 collaboration with Rihanna and Kanye West.

Of course, he also played the massive hits he always plays – “Let It Be,” “Hey Jude,” and “Yesterday” to close out the main set, and part of the “Abbey Road” side-two medley (“Golden Slumbers”/“Carry That Weight”/“The End”) to close out the encore.

According to Internet reports, he played the same set a week later in Hershey, but he has also been rehearsing tunes like “Magical Mystery Tour,” “I’ve Just Seen a Face,” “I’ll Follow the Sun,” “Coming Up,” and “Let ‘Em In” at sound checks.

If you missed the Philadelphia and Hershey stops on this tour, you may want to seriously think about getting to MetLife Stadium in East Rutherford, New Jersey on Aug. 7 or the Verizon Center in Washington, D.C., on Aug. 9 or 10.

With McCartney still pretty close to the top of his game and a repertoire of deeper than usual cuts, this may be the perfect time to see the legend in concert.

Photo of Paul McCartney via paulmccartney.com