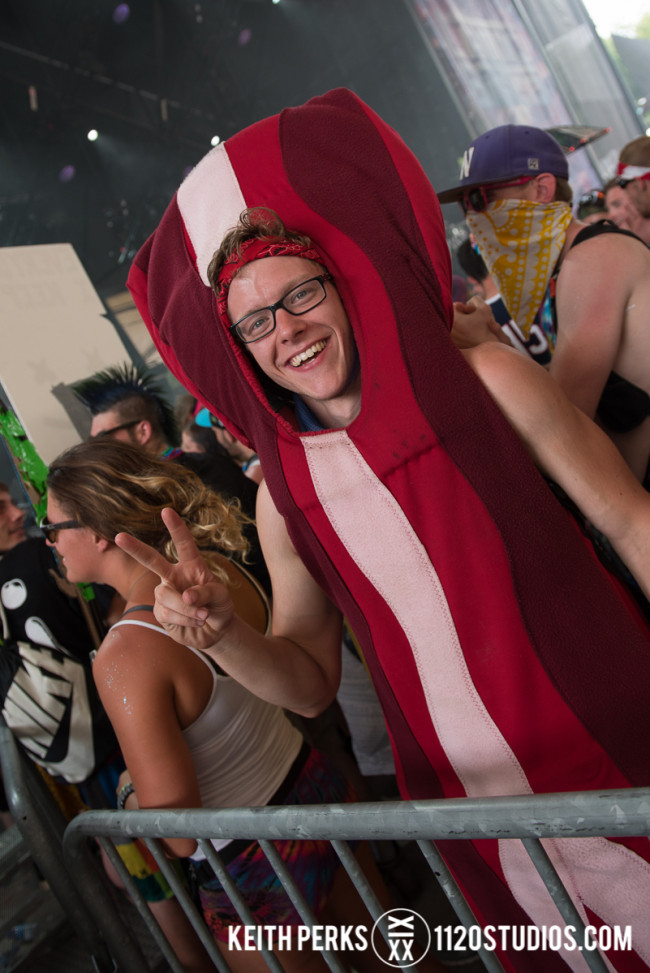 To say that Camp Bisco, the three-day EDM and jam festival held annually at The Pavilion at Montage Mountain, attracts some colorful characters is as understated as noting that Scranton needs a little roadwork. Being nerds, we usually don’t get invited to such cool parties, so we took the opportunity to walk around on July 15 and 16, meet some of the craziest concertgoers who make Andrew W.K. look like a wallflower, and offer our fish-out-of-water first impressions of the Top 10.

These are in no particular order, and before you get offended, we’re not making fun of anybody for having a good time. These people are all genuinely awesome, and we had a blast hanging out with them and pretending to be as cool as they are. 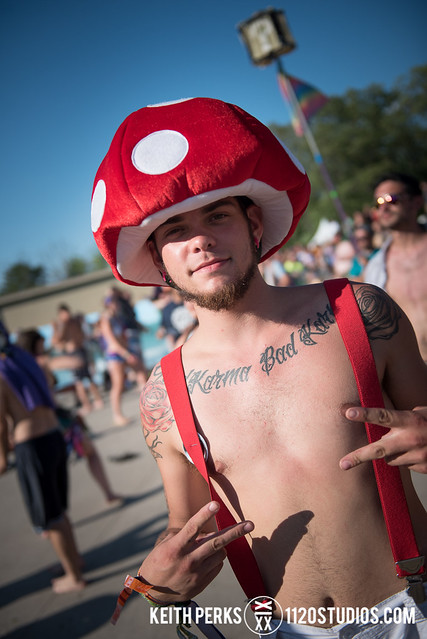 1. Repping the Mushroom Kingdom at Bisco, it seems that Toad from the “Super Mario Bros.” games was sick of being pushed around by goombas and fell into the thug life. “Your princess is in another castle, bro – my castle.” This badass shroom’s got no chill these days, except when he’s hanging out by the wave pool. It’s all about the gold coins, yo.

2. This guy makes Captain America look unpatriotic. Unafraid to show off his love of America – and everything else he’s got – there’s not an article of clothing on him that doesn’t proudly display the stars and stripes, though you can probably guess which part is getting the most attention – cue the easy “half-mast” joke as “The Star-Spangled Banner” softly plays in the background. We’re not sure if wearing the flag as a cape is the proper way to display Old Glory, but really, now that you’ve seen it in action, should there be any other way? If you’ve ever been a part of a “USA! USA!” chant anywhere in this great nation, it’s likely that he’s the one who started it. We salute you – all of you. 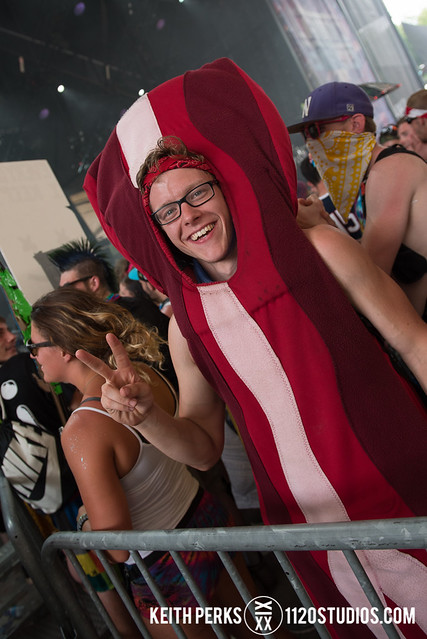 3. It’s bacon! Good thing there’s no dogs allowed at Camp Bisco or this sizzling dude would not be smiling right now. Then again, if anyone gets the munchies, we may never see Mr. Meat here again. Imagine being high and then walking by breakfast here – you’d feel like a cartoon character humming “Let’s all go to the lobby!” as you got yourself a snack. There’s no way he lasted the weekend, either being consumed by hippies or heat exhaustion. RIP, you beautiful bacony bastard. 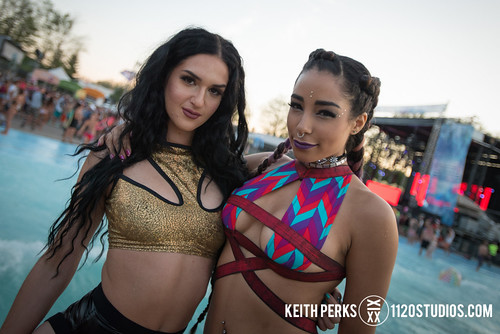 4. We’re not sure if these ladies were here to swim or save the world as kickass superheroes, but we’re pretty positive that they’re quite capable of both. Why are they in the wave pool and not on stage right now? Nobody the Disco Biscuits hired could possibly be more interesting than these two, who are probably just here waiting for their lawyers to finalize their Marvel crossover franchise. Get on it, Hollywood!

5. It’s “Adventure Time,” so come on and grab your friends – even if your friend is a big, sweaty llama. Like Finn and Jake, this human and animal pair was inseparable which, in this heat, shows true friendship. He even gave up his awesome hat so the llama wouldn’t get sun in his eyes. Whether you’re traveling through the trippy Land of Ooo or the even trippier Camp Bisco, it’s important to bring a bro to watch your back. Mathematical! 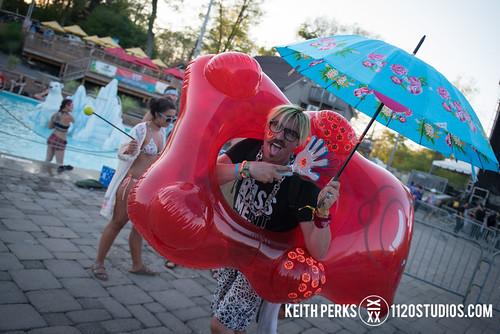 6. This gentleman came well-prepared for a hot summer day – a giant inflatable gummy bear, a pretty parasol to keep the sun at bay or place in a very large drink, a handlebar mustache to let everyone know that he likes to have fun but also keep it classy, and an extra hand to slap any chap he may want to challenge to a duel. The day is young, after all. All this greatness in one bleach blonde bloke for only 99 cents – that’s a bargain. 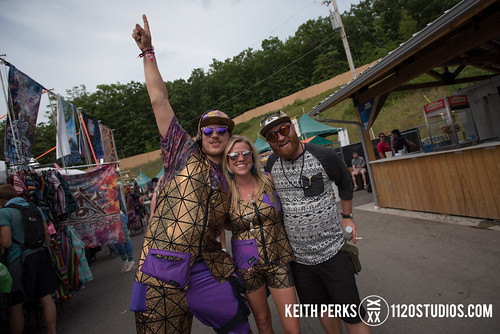 7. You can’t see it in this picture, but he also had a matching cape that sparkled in the sunlight as brightly as his personality – it’s no wonder they all had to wear shades. Usually guys are embarrassed if they’re dressed in an outfit that matches their girlfriend’s, but we’re pretty sure this guy insisted upon it. These super suits designed by Rob Liefeld aren’t just all flare, either – they’re covered in handy zip-up pockets to carry… snacks. Yeah, that’s it – snacks. We don’t use the term “on fleek” very often (or ever), but if anyone is worthy of whatever the hell that means, it has to be this power couple. We’d hate to be their bearded friend there – no matter how cool that third wheel is, no one is going to pay attention to a word he says if he keeps hanging around with Mr. and Mrs. Goldfinger. We only just noticed him now.

These party animals were on the prowl when we ran into them at Camp Bisco in Scranton last weekend! We're not sure how they made out, but they made our Top 10 list of colorful characters were met at Bisco that's now on nepascene.com! #Scranton #WilkesBarre #Moosic #NEPA #Pennsylvania #NEPAScene #music #band #edm #edmlife #edmlifestyle #concert #show #fest #festival #musicfestival #musicfest #bisco #campbisco #discobiscuits #animal #animals #prowler #jumpsuit #funny #party #partyanimal #montage #montagemountain #pavilionatmontage

8. This trio of party animals wouldn’t stand still for a picture – they were on the prowl, and who could blame them? In those skintight outfits, they could probably attract any woman or man they wanted, as long as their prey had a wild side, which is a safe bet at Bisco, though it looks like they’ve been neutered, which is such a buzzkill. It’s a good thing hunting season in Pennsylvania is long over or their hides would be lying out in front of a fireplace somewhere by now. They either had the best time this weekend or ended up getting run off the mountain by PETA. Whichever it was, they must be dead tired from standing on their hind legs all day. 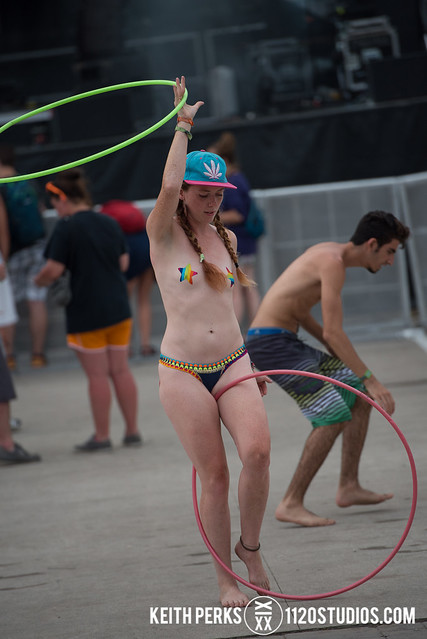 9. Say what you will about this woman – actually, don’t, because whatever you say is probably going to be pretty gross, either drooling over her or condemning her lack of clothing – but you know where she stands on quite a few things just by looking at her. She believes in female empowerment, body positivity, marijuana legalization, possibly LGBT rights with those rainbow stars, and definitely hula hooping – she feels very strongly about rhythmically gyrating in a circle, as she was doing this for hours on end. OK, that’s probably not helping those thoughts from earlier, but we totally support her love of anatomy… we mean astronomy… oh, whatever. 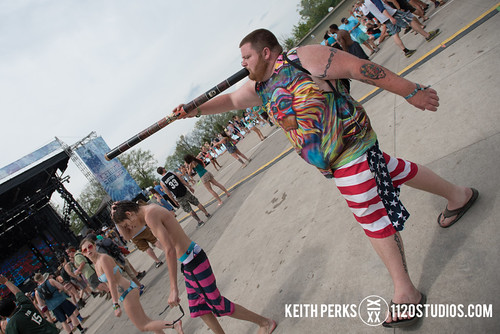 10. He shall play you the song of his people… directly in your ear as you’re trying to briskly walk away from him. Actually, he seems pretty cool, unless you don’t love America or the Grateful Dead – then his beautiful instrument of love instantly becomes a deadly bō staff to mercilessly bludgeon you with… in the epic dream sequence that’s playing in his mind after hitting a bong as hard as that didgeridoo. Just seconds after this picture was taken, the guys in the animal jumpsuits from earlier heard the call and gathered at the bottom of Montage Mountain to see Rafiki here lift up the new lion king.

See our full set of photos from Camp Bisco here, and feel free to share your ridiculous Bisco stories and encounters with us in the comments. These two are still up there making out, so maybe they’ll make the next Top 10 when Bisco returns in 2017! 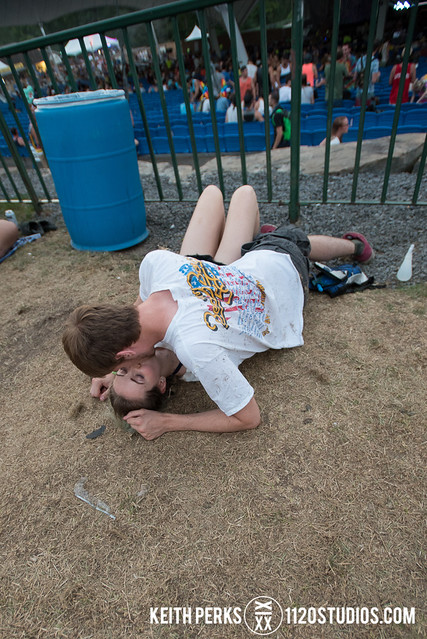