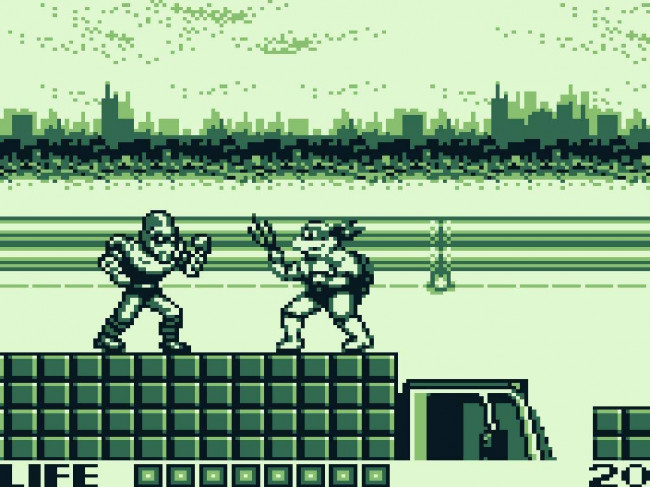 July is here, and on Turn to Channel 3, that means we’re looking at games with explosive action-packed themes, namely two staples of many childhoods – the Teenage Mutant Ninja Turtles and the Mighty Morphin Power Rangers!

We’ll be looking at two gaming entries for each franchise, and we begin today with the Turtles in a Game Boy adventure, “Fall of the Foot Clan!” Let’s head back to the sewers!

As I have a tendency to mention, getting a quality soundtrack out of the obvious hardware limitations of the Game Boy is definitely a marvel to behold when it does happen. While nowhere near as grand in scale as its console counterparts, “Fall of the Foot Clan” does possess some tunes that ooze (see what I did there?) charm. There are tracks that speak to the dark, dankness of the sewers, as well as the adrenaline of a good chase scene. Intermingled with this are some fitting sound effects that mesh well with the soundtrack, conveying the action as you play.

Despite an obvious lack of a solid color palette, “Fall of the Foot Clan” still has easily recognizable characters, as well as most enemies. There are instances later in the game where, despite the use of the contrast knob, some adversaries appear too dark and not as definitive in appearance as others. All of this said, the levels are pretty well-done, although later levels may seem a bit bland and boring to some gamers, and the bosses all look pretty cool even on that tiny Game Boy screen.

Keep in mind that not all franchises, especially licensed brands like TMNT, made the transition to handhelds without some glaring flaws, so the fact that you still feel like you’re looking at and playing a classic TMNT game was no easy feat for developers.

While not as beloved by gamers as other Turtles titles like “Turtles in Time” or “TMNT II: The Arcade Game,” “Fall of the Foot Clan” does carve its own niche on the handheld scene as a TMNT game with its own unique charm and sensibilities. Possessing things like bonus levels, the use of throwing stars, and even a cheat that allows you to restore your life while pausing the game, it gave fans of action titles like this something new to dig their teeth into while not straying too far from the established formula that had worked so well up to that point.

The controls are easy to grasp, and it is also worth mentioning that the little cut scene stills at the end of each level add that last little touch to keep you going into the next level.

Be not afraid, TMNT fans, it is more than OK to enjoy a handheld Ninja Turtles adventure like this without fear of it being boring and tough to enjoy in comparison to its more well-known console game brethren. While smaller in many different ways, this is a fun pick-up-and-go TMNT title that will certainly keep any fan of our Heroes in a Half Shell entertained with their classic Game Boy handheld!

Well, that was the first of my reviews here in this action-packed July of games! We continue on next week with another TMNT title, the unique fighter “Teenage Mutant Ninja Turtles: Tournament Fighters” on the Super Nintendo!

Until then, stay cool, pour yourself a totally radical drink, and game on!