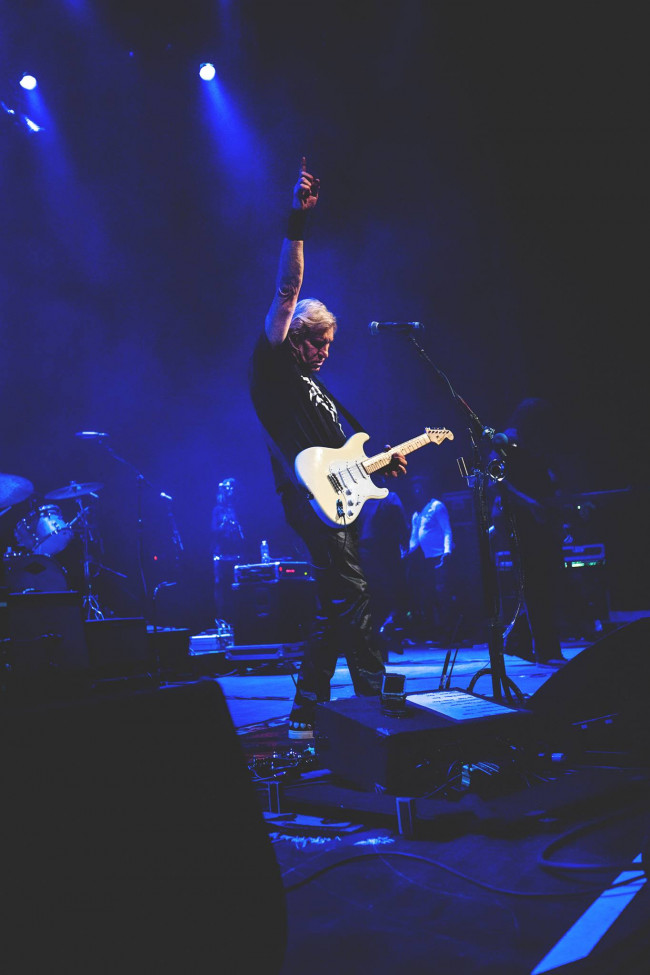 There’s always a good bit of comedy at a Joe Walsh concert, but don’t let that fool you. When it comes to playing guitar, he’s dead serious and he’s a monster.

For “Walsh Toor 2016,” which made a stop at the F.M. Kirby Center for the Performing Arts in Wilkes-Barre on Thursday, Aug. 4, the 68-year-old Rock and Roll Hall of Famer has surrounded himself with an all-star band. Backed by ace session guitarist Waddy Wachtel, bass guitar maestro Larry Young, keyboard players Jimmy Wallace and Clayton Janes, former Barnstorm bandmate Joe Vitale on drums, and second drummer Chad Cromwell, who played with Walsh in the 1980s, Walsh gave the enthusiastic crowd a heaping helping of his James Gang, Barnstorm, Eagles, and early solo classics.

With that, the band launched into the James Gang hit “Walk Away,” which featured some fine guitar interplay between Walsh and Wachtel. He then introduced “Analog Man,” the title track of his 2012 album and the only song all night of a recent vintage, with an amusing story about how the audience will miss the meaning by filming the song on their camera phones.

Up next was a great cover of Sly and the Family Stone’s “Everyday People,” which featured the strong vocals of background singer Rickey Washington. Then it was on to “Mother Says,” a song co-written by Walsh, Vitale, and bassist Kenny Passarelli from the 1972 “Barnstorm” album.

The guitar pyrotechnics were on full display for the epic James Gang standout “The Bomber: Closet Queen”/”Bolero”/”Cast Your Fate to the Wind” from the 1970 album “James Gang Rides Again.”

“I would like to dedicate this next song to my brother and fellow bandmate Glenn Frey,” he said before a stunning version of “Take It to the Limit,” which featured Walsh on a 12-string acoustic guitar. (Frey, Walsh’s bandmate in the Eagles, passed in January at the age of 67.)

It was back to the “Barnstorm” record for “Turn to Stone” (Walsh recorded the tune again for his 1974 solo album “So What”), which is one of those songs that was never really a hit but became a staple of classic rock stations anyway.

“See if you remember this one,” he said of the Eagles tune “In the City.”

“More importantly, see if I remember it.”

The James Gang song “Funk #49” contained a totally unexpected techno breakdown section as dancers filled the stage and T-shirts were shot from cannons into the crowd. Things calmed down just a little after that as Walsh moved on to an eight-minute version of his 1978 hit “Life’s Been Good.”

Walsh brought the main set to a close with a fiery version of the Eagles’ hit “Life in the Fast Lane” (which Walsh wrote with Frey and Don Henley).

After a brief exit from the stage, Walsh returned for an encore of his most-famous tune, 1973’s “Rocky Mountain Way,” leaving the crowd calling out for more.

The show was opened by JD & The Straight Shot, an Americana/roots rock band based in New York City fronted by media mogul James Dolan.

The band, which has previously toured with the Eagles, the Allman Brothers Band, ZZ Top, and others, was in fine form as it played tunes from its latest release, the all-acoustic “Ballyhoo!”

Standouts included “Better Find a Church,” “Glide,” “Perdition,” and a cover of Spirit’s “Nature’s Way” (all from the new CD), plus new song “I Know You Know I Know” and the set-closing rendition of Little Feat’s “Let It Roll.”