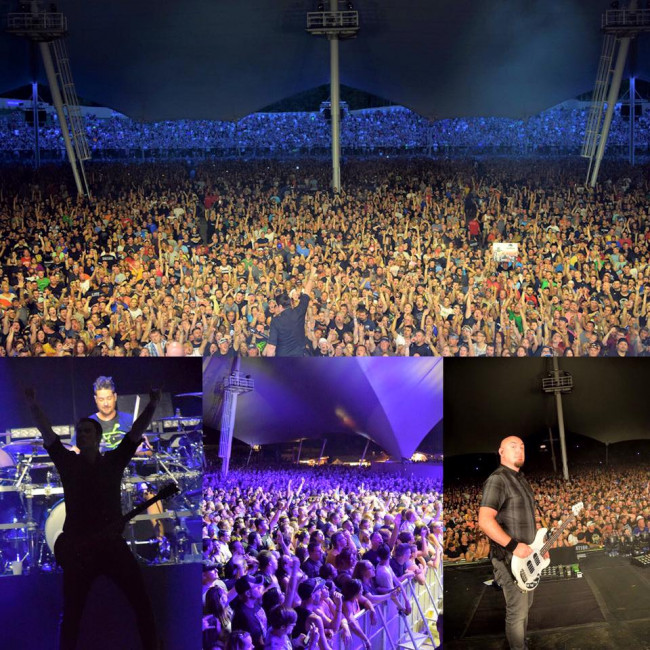 An hour before gates opened to the Breaking Benjamin/Disturbed co-headlining show Friday night at The Pavilion at Montage Mountain in Scranton, it was announced that the show was an official sell-out, having pushed 16,000 tickets.

The sold-out crowd on July 29 also caused quite the congestion getting up Montage Mountain. Traffic was backed up over two miles, which led to more than a handful of concertgoers missing out on opening acts Saint Asonia and Alter Bridge.

I arrived at The Pavilion as Alter Bridge, featuring the former members of Creed with vocalist Myles Kennedy (also the frontman of Slash’s band), was taking the stage. Not expecting too much from them, I must say that Alter Bridge more than exceeded my expectations. Kennedy has one of the better live voices I’ve heard in a long time, remaining strong throughout their entire set. They really caught the crowd’s attention with their hit “Metalingus,” which also served as former WWE Champion Edge’s theme music. Being extremely tight musically and an overall great live band, I knew Alter Bridge would be a tough act to follow up, but Breaking Benjamin would have no issues doing so.

At 8:25 p.m., with thousands of fans still piling into The Pavilion, the lights went down and Breaking Benjamin hit the stage. Opening with one of their biggest singles to date, “So Cold,” Ben Burnley and company set the tone for a night of high-energy singalongs. Continuing with the second single from their latest release, “Dark Before Dawn,” the powerful chorus in “Angels Fall” really got the audience’s attention early on in the set. This was followed up with guitarist Keith Wallen singing lead vocals on “Sooner or Later,” surprising myself and the rest of the crowd with how much he was able to mirror Burnley’s vocal abilities. The hometown boys kept feeding the crowd with hit after hit and, at certain times, it seemed like literally every single person in attendance was screaming the lyrics to every song.

Before launching into their latest single, “Ashes of Eden,” Burnley briefly stopped the set to break up a few people in the pit who appeared to be getting a tad out of control. “Settle down or you’re getting kicked out. We are here to have a good fucking time,” Burnley proclaimed, which was met with adoration from the crowd.

Another key moment from the show was when longtime NEPA music scene veteran, bassist Aaron Bruch, sang “Believe,” and he did so with ease. Bruch appeared as if he was made for the big stage, and he certainly showed 16,000 fans just how talented he is. And as Ben declared it was good to be home just before launching into hometown anthem “Home,” it was almost impossible to hear yourself think with just how involved the crowd was. It was truly a great homage to all of the dedicated fans who have supported the band since day one.

Closing out their 13-song set were arguably two of their biggest hits to date, “I Will Not Bow” and “Diary of Jane,” which both included plenty of big arena pyrotechnics, Breaking Benjamin absolutely owned Montage Mountain and put on the best show of the evening. Catching up with a few fans and asking their thoughts, they all completely agreed that the Wilkes-Barre rockers were indeed back and better than ever. Now including live four-part vocal arrangements with continuous energy and great stage presence, I feel that the current lineup of Burnley, Bruch, guitarists Wallen and Jasen Rauch, and drummer Shaun Foist is, without a doubt, the best Breaking Benjamin lineup yet, so fans can certainly be excited for their future.

Closing out the night out was Disturbed. Now, I must admit, I’m not a fan of the multi-platinum-selling Chicago metal band, but I was still able to appreciate their fiery performance. Fully stocked with their fair share of flame throwers scattered around the stage, they were able to put on quite the show with hit after hit that had the Mountain on its feet. Singer David Draiman even dedicated a song to a young man who lost his life to a drunk driver while leaving Montage after a concert a few years ago, giving the family who requested the shout-out 10 free passes to the show and proving that their tourmates in Breaking Ben weren’t the only heroes in town that evening.