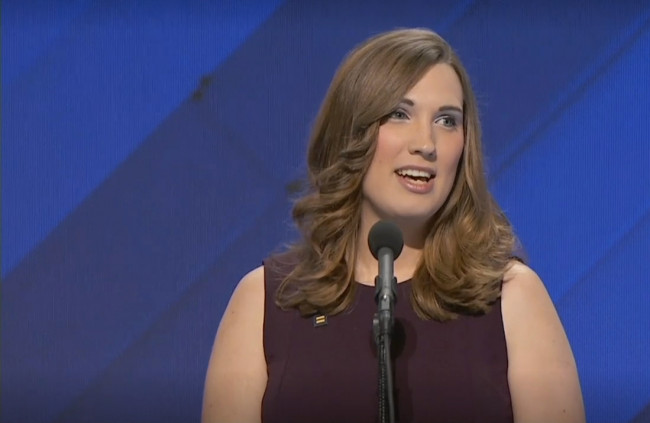 They’re calling it the first time an openly transgender woman has addressed a major convention. Indeed, on a night of firsts, I was brimming with pride to see Sarah McBride take the podium at the Democratic National Convention in Philadelphia on Thursday.

The first time I read about Sarah was her heartbreaking story of courage and loss in The Huffington Post – “Forever and Ever: Losing My Husband at 24.” To be so young and go through something so profound, I find myself so inspired by her. And to know that she’s transgender, to hear her words echoing my own thoughts and feelings, I just had to stop and commemorate this moment.

Sarah spoke of the time she was still in college, serving as the American University student body president when she came out as transgender. From there, she moved on to serve on the Board of Directors of Equality Delaware. She helped to add gender identity and expression to Delaware’s nondiscrimination and hate crime laws. And her credentials don’t end there… far from it. Sarah has led quite an impressive career in such a short span before her time at the podium.

The former White House staffer spoke of progress and the work that has yet to be done. “Despite our progress,” McBride said, “so much work remains. Will we be a nation where there’s only one way to love, only one way to look, and only one way to live? Or, will we be a nation where everyone has the freedom to live openly and equally, a nation that’s stronger together? That is the question in this election.” These are the thoughts that have been on my mind throughout this election cycle. Who would be more open and willing to work towards change for equality: President Trump or President Clinton?

To be honest, I’m still kind of feeling the Bern. I wish Sanders would have done better here in Pennsylvania, where more than 70 percent of Luzerne County voted for Trump. I’m not going to get into conspiracy theories, or what have you, because it’s a tad irrelevant at this point – it is what it is, in other words. Hillary is the nominee, and I feel my vote would be better spent cast in her direction. I have seen what Sanders accomplished in energizing the youth of this country and the large force he was able to mobilize towards political change. I was impressed, I was enamored, I was in love with Bernie Sanders. But he didn’t get the nomination – Clinton did, so I’m with her.

I’m gambling that Hillary will make good on her promise to support and enact many of Sanders’ ideas. At the very least, I can tolerate a disappointing President Clinton, but I don’t think I could possibly survive President Trump. Trump’s lack of ideas are unthinkable for a man who wants to be president, but it’s the ideas he actually does have that disturb me the most – like overturning the marriage equality decision; nominating terrible, terrible replacements to fill the gaps that currently exist in the Supreme Court; the many, many laughable and idiotic things that he wants to do – or thinks he can actually do – and that horribly bigoted choice of a running mate he asked to be Vice President… these things frighten me the most. The gang of thugs President Trump would assemble and the things they would propose threaten to make my life as a transgender woman in this country an absolute living hell. Could we ever see a transgender woman addressing a major national convention under President Trump? I highly doubt it.

The final night of the Democratic National Convention left me in awe. Not only did Vice President Joe Biden drop the “m” word (Malarkey!), but Hillary even gave Scranton a shout-out. In fact, dat’s a cuppa two tree times I heard Scran’on mentioned at the DNC, heyna? And Bill Clinton’s speech actually got me emotional. I’m having so many nostalgic feelings about the ‘90s. We should all be as happy about our lives as Bill Clinton is about balloons.

That whole week was just a gift, politically speaking. Following the existential dread of the Republican National Convention – which included such powerfully influential folks as Scott Baio, that guy from “Duck Dynasty,” oh, and Scott Baio! – Fear Fest, as I came to refer to it, was probably the lowest my hope for the future has been in recent memory. It’s a stark contrast to how I’m feeling today, after a night of historic firsts. Let’s hope it continues.

As for Sarah McBride, I have no doubt that there are big things in the future for someone of her character. To have made national headlines, to have been married and widowed, losing her husband to cancer, to have suffered such loss and to show such bravery… all of this by the time she was 25 years old. This young lady is going to change the world – and we can with her.