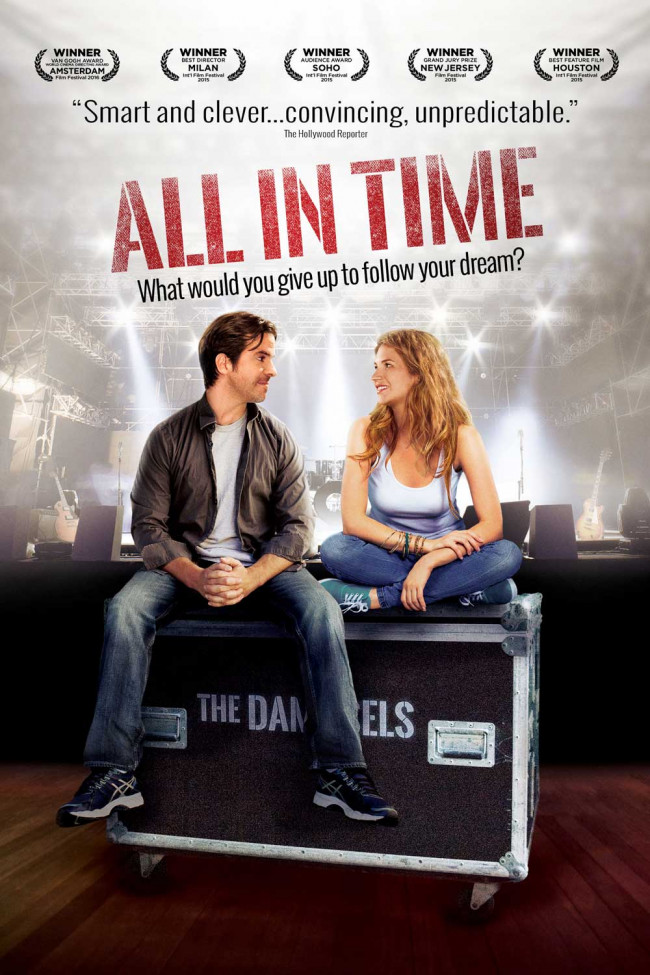 Director Chris Fetchko will bring his latest film, “All in Time,” to the F.M. Kirby Center in Wilkes-Barre on Sunday, Oct. 16 beginning at 2 p.m. with a special live concert by Wilkes-Barre natives The Badlees and special guest Laura Shay to follow.

There will be a press conference at 10 a.m. on Friday, Aug. 26 at the Kirby Center with Chris Fetchko on hand to provide further details on the film and the Northeastern Pennsylvania premiere.

The general admission event on Oct. 16 will start at 2 p.m., followed by a Q&A period with the film’s co-directors, cast, and crew and then live performances by Shay and The Badlees.

“All in Time,” shot entirely in NEPA, is a dramatic comedy about life, love, and passion. The film tells the story of Charlie, who quits his job to move home to Pennsylvania to manage his favorite hometown rock band. His supportive girlfriend shares his love for the band until struggles within the group force both Charlie and his girlfriend to make choices that will impact their lives forever.

The film garnered 12 awards on the 2015 film festival circuit, including “Best Director” at the Milan International Film Festival for Fetchko and his co-director Marina Donahue.

“All in Time” will have its official release in New York City and Los Angeles on Oct. 7 and then tour the country, visiting more than 20 cities. It all begins with a screening at the New York Film Critics Series in Times Square’s AMC 25 Theater, hosted by film critic Peter Travers of Rolling Stone magazine.

The film that the Hollywood Reporter calls “smart and clever… convincing and unpredictable” will then have its NEPA premiere at the Kirby Center.

The Badlees are a Pennsylvania-based rock band that have been creating and performing music since 1990 and are currently entering their third decade of producing their unique sound. Having spent time on two major labels, these days they are relishing the freedom of being independent artists.

The band is currently writing new material to follow up their critically acclaimed double album “Epiphones and Empty Rooms.” Over their career, they have toured with Jimmy Page and Robert Plant, The Allman Brothers, Bob Seger, and Patty Griffin, just to name a few.

Shay is an independent musician from Philadelphia. Her latest record, “Love & Other Things,” is a continuation of Shay’s unique style of organic piano and acoustic guitar-based tracks, coupled with honest lyrics and rich vocals.

Fetchko (co-director, co-writer, co-producer) began his film career in 1998 when he co-wrote and produced “Everything’s Jake” starring Ernie Hudson, Debbie Allen, and Phyllis Diller, which was released by Warner Brothers in 2007.

The West Hazleton native went on to produce “Eavesdrop” with Wendie Malick, Ted McGinley, and Anna Chlumsky, which was released by Shoreline Entertainment in 2010.

In 2000, Fetchko went to work for Capitol Records and, in 2002, he launched a music management firm through which he managed The Badlees, Shay, and Jared Campbell.

In 2004, he executive produced the soundtrack to the MTV Books project “Lit Riffs.” His experience in the music industry led to the initial inspiration for “All in Time.”

As Fetchko says, “After touring the world with this film, I am thrilled to be able to bring it home to Wilkes-Barre where it all began.”