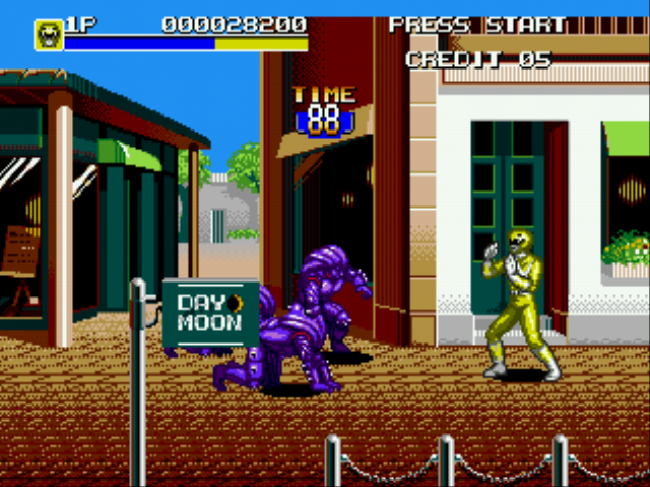 You know, when someone says, “I hate being an adult,” or “Don’t make me have to adult today,” chances are this is because of just how awesome their childhood was. At the same time, however, one of the greatest challenges of being an adult is understanding and appreciating the fact that some of those memories may not have aged well, or we have to look at them differently now than we did all those years ago.

The question remains, what does this game look and play like today, all these years later?

As with last week’s MMPR game, while the soundtrack is decent, what truly hurts it is a lack of clarity from the limited audio capabilities of the Genesis. While some people have grown up with this, others, like myself, have not. Is it so terrible you don’t fully grasp what you’re hearing? No, of course not, but it just doesn’t sound quite as pleasing to a gamer’s ear as it could be.

The sound effects tie well into the soundtrack and, aside from the occasional unnecessary sound bite, were also fairly well done. It’s always difficult these days to fully understand why developers didn’t branch out and create a variety of tunes and sounds in these licensed action titles. This isn’t the case with all games like this one but, for some reason, some programmers were too safe with the licenses in that department.

With decent-sized sprites, colorful levels, and well-done cut scenes, you wonder at times why this wasn’t an arcade title first. That being said, this is the beginning of that feeling that there just wasn’t enough variety in this game to make it stand out from the pack. While I felt they pushed the envelope further than the previous title (which truly isn’t saying much if you’re a diehard Power Rangers fan) and bosses varied in quality as far as design goes, again, I was left wanting more.

One can certainly argue that all developers did between the original MMPR entry on the Genesis and this one is slap the words “The Movie” on it, limit the fighting game aspect, and focus more on the beat ‘em up style that was present on the Super Nintendo debut of the Rangers prior to this. The thing is, they’d be correct in a lot of ways. What that creates is a game lacking in replay value, lacking in variety, and just overall lacking in gaming entertainment. Nostalgia is a powerful thing, but when gameplay consists of punches, kicks, weapon use, and a special attack, that isn’t anything that countless other titles within the genre were doing at the time.

While the story (as convoluted and messy as it was) is a nice touch, it all leads to the predictable giant boss fight in your Zord of choice. Was it cool to have the use of the White Ranger? Certainly. But it just isn’t enough to carry this game out of the one-and-done zone that many average games are trapped in.

Games that were made strictly to cash in on a craze are still prevalent now and, sadly, at 35 years of age, my eyes are wide open to the fact that they also existed during my childhood. “Mighty Morphin Power Rangers: The Movie” is one of those many licensed titles from the ‘90s that could have been so much more, and yet developers and programmers got greedy, lazy, and played it too safe, years after Konami blazed the trail with the myriad of “Teenage Mutant Ninja Turtles” games that are still beloved all these years later.

Bottom line, this is an average beat ‘em up, with elements of a fighting game and a plot as cheesy as the television show and movie combined.

I hope you enjoyed this review. Next time on Turn to Channel 3, we go back to a time when one name was synonymous with video games – the era of Atari.

Until then, enjoy what’s left of the summer and be sure to pencil yourself in for some time to game on!