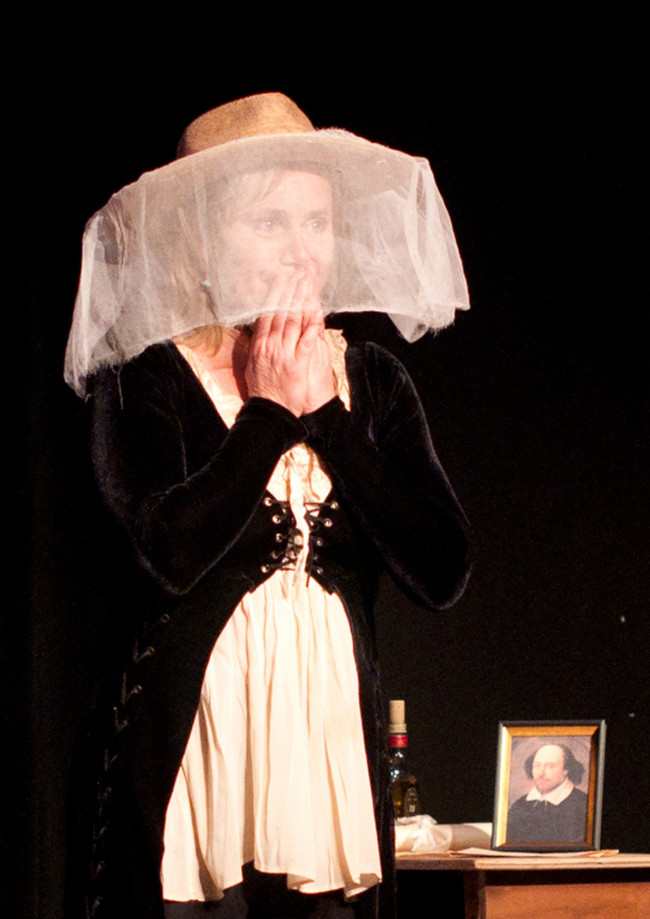 The NACL Theatre from Highland Lake, New York will present “Shakespeare’s Will” by Vern Thiessen at the Scranton Cultural Center on Saturday, Oct. 1 at 7 p.m. and Sunday, Oct. 2 at 3 p.m. as part of the Scranton Fringe Festival.

Tickets for the show in Shopland Hall at the Scranton Cultural Center (420 N. Washington Ave., Scranton) are $10 or $7 for Fringe Fest button holders and can be purchased in advance via TicketLeap.

In a lively, song-filled performance, Tannis Kowalchuk portrays Anne Hathaway, the wife of William Shakespeare. On the day of Shakespeare’s funeral, as she prepares to read his will, Anne relives her life as a mother, wife, and woman in 17th century Stratford-upon-Avon.

Award-winning Canadian playwright Vern Thiessen has written a sensitive and comedic text in verse. In one hour, Kowalchuk moves seamlessly from character to character and decade to decade, bringing a robust, earthy, and intelligent Anne Hathaway to glorious life. The play is directed by Mimi McGurl with music by Kurt Knuth and costumes by Karen Flood.

The NACL production of “Shakespeare’s Will” has been performed at NACL Theatre in Highland Lake; the Tusten Theatre in Narrowsburg, New York; the Pontine Theatre in Portsmouth, New Hampshire; the Cooperage in Honesdale; in Spring Island, South Carolina; and at Moore’s Barn in Callicoon, New York. The performance will also tour to Willamette University (Salem, Oregon) and Warwick Library (Warwick, New York) this year.

Founded in 1997, NACL is a professional theatre company based in rural New York in the Delaware River Valley. NACL is driven by a commitment to collaborative inquiry, turning the rehearsal room into a creative laboratory, where the ensemble experiments, raises questions, and tests hypotheses. After successful years producing in New York City, the company moved in 2000 to Highland Lake to its current venues: a church-turned-theatre and a 12-bedroom artists’ residence. NACL is led by co-artistic directors and co-founders Tannis Kowalchuk and Brad Krumholz.

Originally from Canada, Kowalchuk trained in the ensemble physical theatre practices of Primus Theatre (Canada) and Odin Teatret (Denmark). She has created and performed in 17 NACL productions. In 2016, Kowalchuk conceived, directed, and played the title role in a sold-out run of “Courage,” a site-specific original performance based on Bertolt Brecht’s “Mother Courage and Her Children,” which will tour to Governors Island, New York in 2017. In 2014, she directed “The Weather Project,” a large-scale theatre performance with a cast of over 75 professionals and community members. Kowalchuk is a graduate of the University of Winnipeg. Since 2008, she has also been an organic farmer in the Delaware River Valley on Willow Wisp Organic Farm.

“Tannis Kowalchuk breathes rich, layered life into the character, who is funny, wise and burdened, as she regales the audience with her experience being married to the world’s most famous playwright. Mimi McGurl’s direction is flawless, and music and sound designer Kurt Knuth’s contribution more than noteworthy,” Jonathan Fox of the River Reporter wrote. “The entire production is enhanced with a great use of the space, props, costumes and lighting (provided by the multitalented Zoot), and Kowalchuk’s performance is a tour de force.”

“Throwing sentimentality, reverence, and historical accuracy out the window, Thiessen imbues his script with humour and a brand of theatricality that is equally apparent on the page as on stage. Embracing a refreshing audacity that pushes presumption aside, he presents an alternative perspective on Shakespeare that’s an intelligent and generous vehicle for actors hardy enough to drive it,” said Elizabeth Mitchell in Quill and Quire.