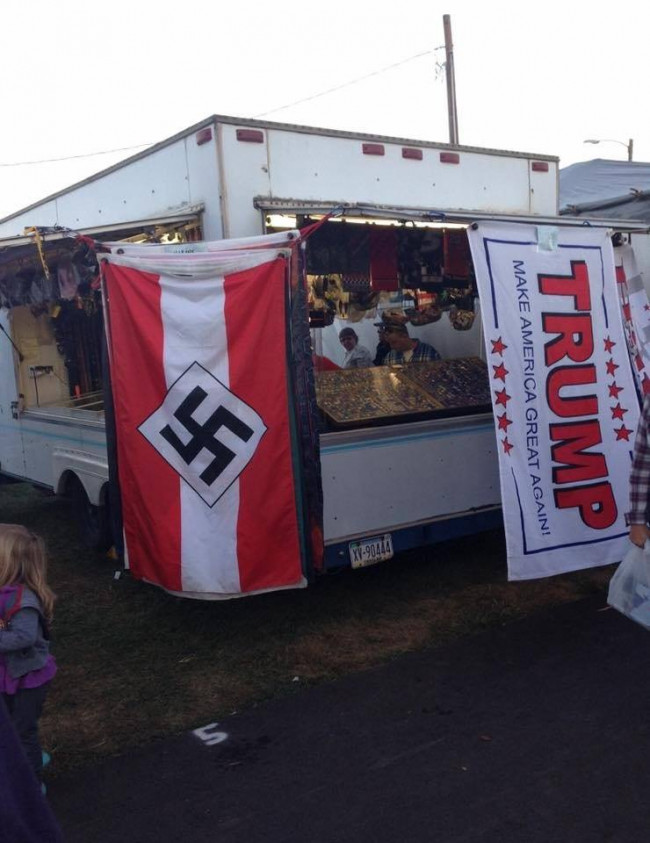 This time of year, many residents of Northeastern Pennsylvania make their annual trip to the Bloomsburg Fair for family-friendly fun, and even those who don’t attend watch their social media feeds blow up with photos of delicious fair food, farm animals, live music, carnival rides, games, and more. Over the last 24 hours, however, a photo of a Bloomsburg Fair vendor proudly displaying a Nazi flag quickly went viral, particularly since it was hung directly across from a flag promoting Donald Trump for president.

Another photo showing a display of bumper stickers from the same vendor features a series of offensive slogans, the most prominent being one that reads “AIDS cures fags.”

While the original post of the Nazi flag photo, taken on Sunday by Scranton resident Chloe Winters, has since been deleted by Facebook “because it doesn’t follow the Facebook Community Standards,” the photo has been copied and shared hundreds of times since then by locals who are appalled by the display, questioning how this got past fair organizers in the first place. A young girl is seen in the corner of the picture as thousands of families passed by the booth all weekend. 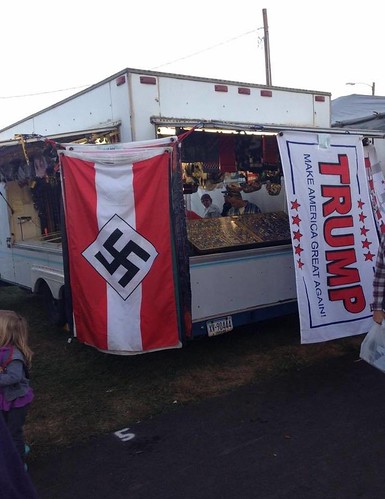 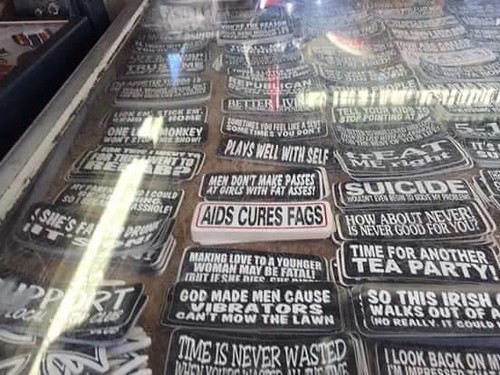 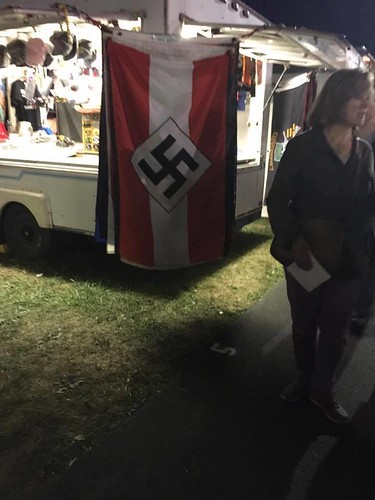 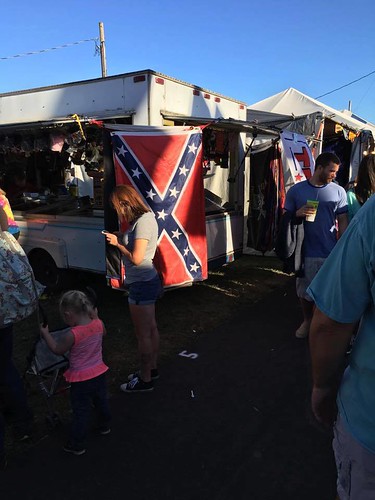 The Bloomsburg Fair Facebook page has been flooded with comments asking that the vendor be removed along with dozens of negative reviews of the fair, citing the flag display. The fair responded to several comments with the same vague statement, “The Bloomsburg Fair has taken care of this issue and will continue to monitor any similar issues,” angering commenters who wanted assurance that the vendor was kicked out.

“We were initially unaware of the flag and other merchandise being displayed by a vendor on our fairgrounds. Most posts were made after midnight, and as soon as we were made aware of it early this morning, we took the appropriate action with the vendor to remove those items. Unfortunately, we have over 1,200 vendors on our fairgrounds and it’s difficult to monitor each one individually. Whenever someone brings something like this to our attention, we always discuss it with the vendor and take any steps to maintain a family-fun atmosphere at our fair.”

The Bloomsburg Fair says that the offensive items have been removed and will be returned to the vendor after the fair is over, but the vendor is still allowed to continue to sell his wares.

The photo reached Dwayne Heisler, Democratic State Committee Representative of Columbia County, who said, “As the elected Democratic State Committee person representing Columbia County and a human being, I am disgusted and enraged by these displays of bigotry, hatred and homophobia in our local community. Is this what we want our children to see at the Bloomsburg Fair? This stand needs to be removed from our fair grounds.”

Allegedly, the controversial vendor is “Lawrence of Indiana,” a stand owned by Lawrence Betsinger Novelties. According to an article published by The Indiana Gazette on Nov. 10, 2015, Lawrence E. Betsinger, who was 71 at the time, was charged by state police on Sept. 13 with failure to comply with registration of sexual offender requirements, harassment, and disorderly conduct, offering only brief details:

Police investigated a report that Betsinger had failed to report a change of address. During the investigation, police found that he was still living at the same address, but he had acquired a new vehicle which he failed to report. Upset over the investigation, Betsinger came to the state police barracks, Indiana station, and confronted an officer in a threatening manner, according to documents. Betsinger waived his right to a hearing and opted to face action in Indiana County Court.

According to homefacts.com, Betsinger is also registered sex offender for distributing “obscene and sexual materials” and was convicted on Dec. 7, 2007. He has been listed on Pennsylvania’s Megan’s Law sex offender website since 2008, where his temporary address is 620 W. 3rd Street in Bloomsburg, the same address of the Bloomsburg Fair.

UPDATE: As the story continued to spread, Philadelphia Magazine caught up with Betsinger and questioned him about the flag, which he said is “a historical German flag,” not a Nazi flag.

“I’ve been doing this shit for 45 years,” Betsinger said. “I can’t see where it would be some tragic thing just because somebody bitched and moaned about it.”

After the fair confiscated the Nazi flags as well as some of his Confederate flags, he mentioned that he also has “Hillary for President” and “Hillary for Prison” flags, selling some of the prison flags and “exactly zero” of the pro-Hillary flags. There was no mention of the “AIDS cures fags” sticker.

“If you don’t want it, don’t look at it,” he continued. “I’m not making anybody buy it. I guess there’s no First Amendment at the Bloomsburg Fair.”

Philadelphia Magazine found that Betsinger was charged with more than 20 counts related to child pornography in 2007, entering a plea deal and sentenced to probation.

“I didn’t do anything wrong,” Betsinger, who is required to be on the Megan’s Law registry for the rest of his life, stated. “I downloaded some shit on the Internet, and now I’m being punished for the rest of my life.”

According to WNEP-TV, Betsinger was finally removed as a vendor after the fair was informed that he is a sex offender. NEPA Scene was the first new source to report Betsinger’s criminal history as part of the increasingly public Nazi flag story.

The 161st annual Bloomsburg Fair runs from Sept. 24 through Oct. 1. 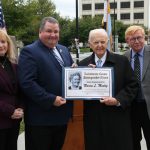