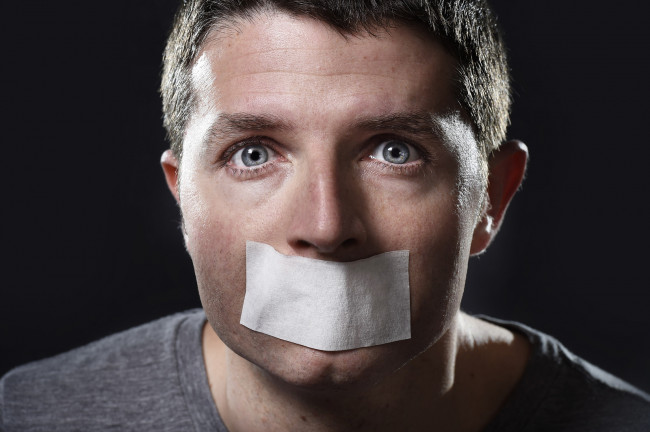 Have you all seen the Snickers commercials where there is some toxic person ranting and raving until someone gives him a Snickers and he turns back into his happy-go-lucky self? Well, a friend of mine recently pointed out a meme to me that says, “I ate a Snickers and I’m still an asshole.”

I’m going to use that as an intro to today’s topic: when to shut up and what that can do for your hopes and dreams.

There is this scene in “National Lampoon’s Christmas Vacation” where these two hillbillies are riding Clark’s ass on his way to get a Christmas tree. His wife says to let them pass. Clark decides to teach them a lesson; he ends up wrecking the car. The hillbillies drive off… dumb as ever.

Applying these stories to musicians is easy. Musicians tend to be independent, free-thinking folk with lots of opinions about what they do. They speak their minds about everything. They fight every battle. And, sometimes, they promptly throw the baby out with the bathwater.

I’ve done it lots of times.

I’ve had several bands I have worked with in the studio this year break up over easily fixable issues – a full schedule and a promising future ripped to shreds over obtuse “principles.” It’s a shame, but all too common.

As Tom Hanks said in “That Thing You Do,” “It’s a familiar tale.”

But let’s take a little detour here. If we take a second and zoom out, I want to talk about the division in our country as a whole right now. I’ll bring it back around to music in a bit. It’s a related conversation.

If I were asked to place one word at the center of the argument between the two sides, I would choose the word “obey.”

On one side, you have, “Obey our country,” “Obey our customs,” “Obey our laws,” “Obey our religion,” and on and on. Some from this side might use the word “respect.” In my opinion, respect and obedience are two very different things. Anyway…

On the other side, well, over there, you have disobedience. A lot of this stuff isn’t working for them, so they are getting in the face of it all, for better or for worse.

I’m not here today to take a side in this argument. But no matter where you sit, one thing is for certain: the status quo ain’t going down without a fight. It never does.

Which brings us back to the music…

Many years ago, my band was fighting over an issue (I can’t even remember what it was) and our booking agent at the time gave me a quote that has always stuck with me. He said, “The poor blacks hate the poor whites but, at the end of the day, they are both fucking poor.”

And meanwhile, other lesser talented people are passing you by.

Now this is completely contrary to my Appalachian, working class upbringing. You are taught that the guy who speaks his mind is a badass. The guy who “tells it like it is” is a force to be reckoned with. And, chances are, you are going to get screwed anyway, but it is honorable to go down swinging no matter what the issue. Honor at all costs. (Side note: There is a book out now called “Hillbilly Elegy” that explores this in more detail. I haven’t read it, but I have heard good things.)

Start a band, make it awesome, rule the world, then tell everyone to kiss your ass.

Or, to put it another way, with success comes freedom. It is far easier to tell an obnoxious gatekeeper of the music business (record label, club owner, booking agent, etc.) to pound sand when you are helping pay his salary. It is far better to combat stupidity from a position of strength than from a position of honorable helplessness. And, somewhat ironically, you get there by sometimes keeping your mouth shut for a while, even when you are 100 percent right.

Now, please don’t misunderstand this. If you are in a dead-end situation, don’t be a wallflower. Get out now. And don’t be afraid to stand up for what you believe in. The person who is well-liked but never takes a stand on anything is just an agreeable pussy. Harmless at best.

But keep your eye on the prize and give it some serious thought before you do these things.

You are defined just as much by the battles you avoid as the ones you fight and win. I feel like a wuss even saying that. Old habits die hard. But experience has taught me that this is true.

The music you save may be your own.

I’ll leave you with a story Robert Duvall told in “Colors.”