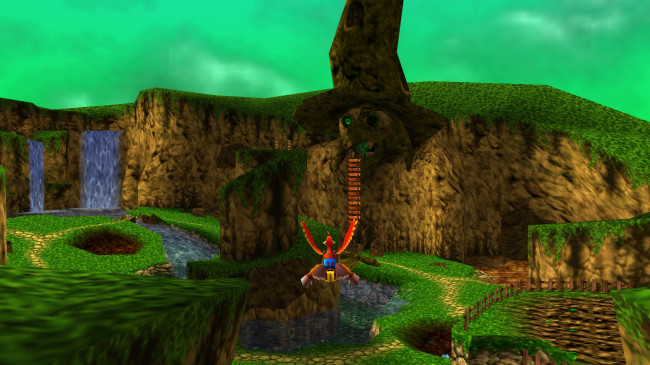 Did you guys miss me? Well, I missed you guys too! Fret not, for Turn to Channel 3 has returned and is ready to bring you that nice piping hot slice of gaming goodness with extra childhood in every bite!

Let’s get right to it as we start another “64 September,” looking at some games for the Nintendo 64! We begin today with the 2000 follow-up to the exciting original 1998 hit “Banjo-Kazooie” for the N64, “Banjo-Tooie!”

Without question, composer Grant Kirkhope, who had done work for games like “Perfect Dark,” “Donkey Kong 64,” and “Banjo-Kazooie,” continues his great soundtrack work here. With more memory space available, Kirkhope was able to expand on what he was able to do in the previous game. Themes change to reflect the location of the player, continuing the interactive aspect developed in the original game.

What I really enjoyed about the soundtrack was the very Saturday morning cartoon aspect of what you were hearing, which fits the comedic, cartoony feel of the game. The game gets dark and ominous when it needs to, while still keeping that lighthearted, bubbly, upbeat tone throughout. The soundtrack also fits well with the dialogue in the game, capturing those witty moments that fans of both N64 games enjoy.

However, one of the most grating things about this game in general is the sound effects, namely what you hear as the dialogue is presented. While I’m glad voice actors were not hired here, as it wouldn’t fit the mold of the game at all, there’s only so many times you can hear laughs, caws and, most of all, what sound like burps, over and over from characters in the game when they speak. It makes you mash buttons to not have to read the dialogue.

Rare created some amazing environments during their days with the Nintendo 64, and this game is no exception. With vast caves, mountains, and grasslands, just to name a few, “Banjo-Tooie” continues where its predecessor left off with some beautifully designed visuals and quirky characters that help facilitate the story being told here. I felt that the graphics were of a smoother variety in comparison to the original romp on the N64, which was largely due to the increased memory space. This game contains some of most beautiful visuals and sequences on the console.

Programmers should be praised for creating characters as iconic as those on other Rare favorites, like “Conker’s Bad Fur Day,” “Donkey Kong Country,” and “Killer Instinct.” Due to the continued art style of this game, people know who Banjo and Kazooie are, and in an era dominated by Mario, Link, and countless others, that’s an accomplishment and a half.

Some people may find “Banjo-Tooie” to be too vast, too much for an average gamer to consume, but in a gaming period where replay value and having a variety of options for gamers was slim, is that really a bad thing? Certainly critics feel that remembering every little detail in the game requires a photographic memory, but it is those little things – collecting Jiggies, golden jigsaw puzzle pieces, obtaining musical notes for new moves, and being able to play as other characters, even Banjo and Kazooie separately – that sets this game apart from the many other hits on the N64.

Every move from the original “Banjo-Kazooie” is available to the player at the start of the game, which helps build familiarity for gamers who played the original and is a nice touch.

While not as critically acclaimed as the original, “Banjo-Tooie” pushed the envelope even further, as many other additions to the original were used in part in this title. This game also has roughly 150 total characters, which is pretty impressive. Despite this, many additions to this sequel were scrapped, including “Bottle’s Revenge,” using an undead version of the character Bottle to hinder Banjo in his quest, as well as “Stop ‘n’ Swop,” which would have allowed players the ability to transfer data from “Banjo-Kazooie” to “Banjo-Tooie” to unlock additional bonuses, the latter due to the hardware limitations of the N64.

“Banjo-Tooie” may not be as well-known as the original game in the franchise, but it still continued building on that formula in ways that not only changed the way gamers looked at N64 titles, but also what many gamers expected of games in general.

That does it for me. I sincerely hope you enjoyed this review. Next time on Turn to Channel 3, we continue on with the Nintendo 64 and another piece of Rare’s impressive portfolio, “Donkey Kong 64!”

Until then, in the hustle and bustle of kids returning to school and college courses getting into in full swing, find some quality time to game on!