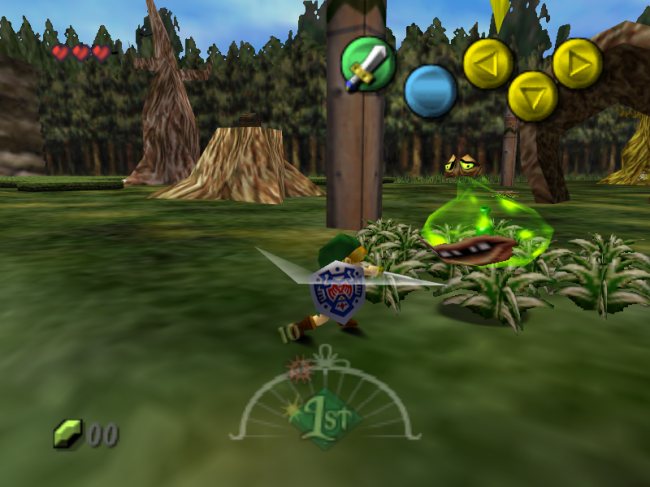 Within the realm of gaming, there are many debates between gamers, some that rank right up there with other consumer loyalties like Pepsi or Coke. While Nintendo vs. Sega and the Super Nintendo vs. the Sega Genesis are definitely the most notable, fans of “The Legend of Zelda” still continue to discuss just which entry in the franchise is the absolute best, and this is no more prominent than on the Nintendo 64.

As we continue today during a “64 September,” we take a look at the other half of the N64 “Legend of Zelda” games. If you weren’t an “Ocarina of Time” fan, you were a fan of today’s topic, “Majora’s Mask!”

So what makes this game so memorable and preferred by some diehard “Legend of Zelda” fans over the equally lauded “Ocarina of Time?” Well, time is of the essence, so let’s get right down to it!

Yes, while some of the soundtrack carries a lot of the same kinds of music you hear in “Ocarina of Time,” “Majora’s Mask” possesses a lot of dark, ominous tones as well, which obviously ties really well into the whole “Oh crap, the moon is going to fall on us, killing us all” thing in case you didn’t get that whole deal from simply playing the game.

While “Ocarina of Time” definitely has a lot of character, and a great cast of them, I truly felt that, despite the limitations both games have with voices among the various characters, there was a distinct charm about “Majora’s Mask” and its zany cast that sets in apart from the rest. “Majora’s Mask” may not have the most iconic “Legend of Zelda” soundtrack, but it is no slouch either.

Graphically, “Majora’s Mask” only has subtle differences with “Ocarina of Time,” which again ties into the overall tone and feel of this game, which is certainly different and very unique as far as the entire canon of “Legend of Zelda” games go. The thing is, these differences, while subtle in most aspects, don’t hide the fact that “Majora’s Mask” has a much smoother transition in frame rate than “Ocarina of Time,” and that’s saying something.

I found the environments and characters presented here to be of a more mature variety than “Ocarina of Time” while still having those unique and downright bizarre players who help make the game so interesting. “Ocarina of Time” wowed audiences with its graphics and, while Majora’s Mask didn’t quite have that same response, I believe it was because fans expected it at that point.

“Majora’s Mask” often gets a bad rap for just how daunting a task the player is given which, in turn, has made many diehard “Legend of Zelda” fans gravitate towards it for its unique take on the tried-and-true linear form of many classic games of the time. Link is tasked with preventing the moon from crashing onto Termina, which was sent into a decent by the nefarious Skull Kid. While this may seem difficult just with that information alone, keep in mind, Link has three days to stop the moon from crashing into the town and, if he is unable to, he will lose everything he accomplished. Did I mention three days in Link’s world is really just 54 minutes in real time? Feeling a little tense yet?

What is nice is the fact Link can play “The Song of Time” to return to the first day in the three-day cycle, which not only keeps Link’s chances alive, but also permanently saves all of Link’s progress should he not be able to save the day in time. Dungeons once again play a key role in finishing the game, but the element of time definitely adds another factor you don’t often experience in “Legend of Zelda” games or those like it. Whether you find “Majora’s Mask” too challenging or exactly what you’d expect from a “Legend of Zelda” title, there’s no denying that the gameplay is unique, original, and intense, which definitely makes it a blast to play.

It seems most fans of the Zelda series have a love/hate relationship with “Majora’s Mask,” in that they either love it or despise it, building camps of those who believe either it or “Ocarina of Time” is the superior game in the franchise’s illustrious history, to the point of it being considered the greatest game in the series. No matter what side of the fence you’re on, there’s no denying the lasting appeal of “Majora’s Mask” or its rightful place among the upper echelon of “Legend of Zelda” games. With a hologram variant card, this is an extra special addition to any N64 collector’s stash.

I hope you enjoyed this review. Next time, we finish up a “64 September” with an unsung hero among the N64’s library, “Paper Mario!”

Until then, get those hoodies, pumpkin spice lattes and, of course, retro video games ready, because fall is here, so game on!